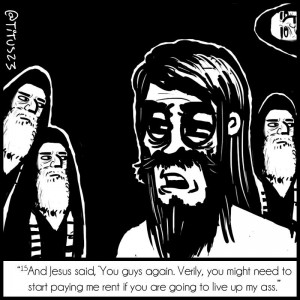 When we last looked in on Pissy Jesus, he was trying to reeducate the Twelve Apostles on the true meaning of the sins of Sodom. It was not going well.

1 And Jesus did go unto the mountainside to pray and sent the apostles across the sea to advance the next venue. 2 But a great storm arose, and, as the apostles had ventured half way across the water, it did toss their boat hither and yon, which was the worst way for a boat to be tossed. And the apostles did strain against the waves but their oars found no purchase. 3 And they did cry out for fear, and Jesus, still on the mountainside, did hear them with his super-hearing.

4 And after locating them with his super-omniscience, Jesus did even walk out onto the water and thereby crossed the sea unto the beleaguered apostles. 5 And when they saw him they said, “Ah! Ghost!”

6 And Jesus did call out to them, “Be not afraid! For I am not actually a ghost!” 7 And Simon Peter did call back, “You are walking on the water! You pretty obviously have no corporeal mass, verily like unto a ghost!” 8 And James did say, “And are not displacing enough water with your feet to gain sufficient buoyancy to float, just like ghosts don’t!”

9 And as Jesus did tread ever nearer, the apostles, vexed with fear, did even attempt to row faster until they remembered their rowing did not work in these circumstances. 10 And Jesus did say, “I’m not a ghost! Knock it off.” 11 And the storm did abate and the waters calmed, and the apostles were amazed. And John did say, “Truly you are the Son of God.” And Thomas did say, “So none of you guys remember him just a few hours ago feeding five thousand people with five loaves of bread.”

12 And Jesus did say to Thomas, “You are in charge when I am not around.”

13 And they did row even unto Gennesaret, and there did word spread that the great healer who had burned the Pharisees had come nigh, and the people did gather and give their thanks by offering a feast unto the apostles. And so hungry were the apostles from the rowing that they did even go to eat the food with unwashed hands. 14 And the Pharisees had again come out from Jerusalem and did say unto Jesus, “Why do thy disciples eat with defiled hands in contravention of the traditions of our elders?”

15 And Jesus said, “You guys again. Verily, you might need start paying me rent if you are going to live up my ass.” And as he said it, Jesus held up a hand to Judas, who had begun aiming a spear at the Pharisees. 16 And Jesus said unto the throng, “Understand that nothing outside a person can defile them by going into them. Rather, it is what comes out of a person that defiles them, for things from outside go not into the heart but into the stomach, and thence without the body.”

17 And the throng did say, “Eeeww!” 18 And Jesus did say, “First, grow up. Second, what is born within a man’s heart and comes out of him are those things that truly defile him, theft, murder, adultery, greed, malice, deceit, envy, slander, arrogance.”

19 And Thomas did murmur, “Demagoguery.”

20 And Jesus did say, “Yes, and demagoguery.” Then Jesus did look at Thomas and say, “There is such a thing as being too smart.”

21 And Jesus did hie unto new cities and again found himself teaching multitudes, and again did the apostles fail to anticipate catering needs. And when the apostles did ask Jesus how they would feed four thousand with only seven loaves, Jesus again did rub His eyes with thumb and forefinger.

22 And Jesus did say unto all there, “Hearken, for soon you will need to make your own decisions that hew to the spirit of God’s will though they even run afoul of laws of the elders. For so has it been hinted in gruesome detail I will be killed, insofar as that is possible.” 23 And Peter did step in front of Jesus and say of low voice, “I am not sure this is a thing to tell people just when a movement is gaining momentum.”

26 And Jesus did say, “Priorities, people! This is the key thing. Not everything is about you. What good is it for someone to gain the whole world, yet forfeit their soul?”

27 And the same man did say, “Because if we did go to war, even if we were losing, you could just heal everyone with your powers and we would win.”

28 And Jesus did look unto Thomas, who shrugged and said, “He kind of has a point.”

Read about all the Adventures of Pissy Jesus here.

More cartoons and art by Luis De Leon Diaz can be seen here!

The Gospel of Eddie, Jesus’ Business Manager: Into the Wilderness
By Matthew Grimm
Sunday, August 25th, 2013