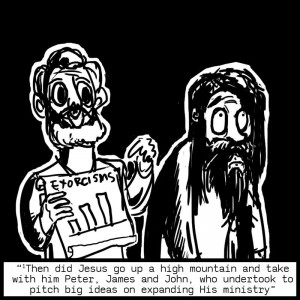 When we last looked in on Pissy Jesus, He was mistaken for a ghost by his apostles when he walked on water. Later, He discussed with them origin of sin.

1 Then did Jesus go up a high mountain and take with him Peter, James and John, who undertook to pitch big ideas on expanding His ministry. And Jesus hoped the climb would take their breaths such that they would speak less, but they were persistent, and upon achieving the peak, 2 Jesus even before their eyes did transform as if made pure light. 3 For He took on an aura, and His robes did become a shimmering white as if the sun, 4 and even in the glow appeared on either side of him the prophets Moses and Elijah. 5 And John, James and Peter did say, “Holy shit,” and did prostrate themselves even unto the ground. 6 And the cloud over the mountain did also glow then and from it came a voice as if thunder, which did say, 7 “This is my Son. Shut up and listen to him.” 8 And then the cloud did pass and they did look up and only Jesus stood there on the mountaintop. And Jesus did say, “I can probably assume we’re all clear on that, right?”

9 And the apostles did nod in rapid fashion. 10 And then the cloud returned briefly and whispered something to Jesus, then did depart again. And Jesus did grumble and then said, “Okay, verily you would speak not of this until the Son of Man has risen from the grave.” 11 And Jesus did then descend the mountain and John, James and Peter did follow, and Peter did say, “So again this thing with someone rising from the grave.”

12 And Jesus did say, “That’s what I was told.” 13 And Peter did say, “Knowest thou, Rabbi, that people dying and then being alive again does not happen a lot.”

15 And upon returning there below, they found the other disciples amid another large crowd. And when the people saw Jesus they flocked to him with distress, for among them was a boy greatly vexed with an unclean spirit. 16 And Jesus did say, “Right, fine, got it,” and he strode past the boy and did flick two fingers in the direction of the boy and the unclean spirit did leave the boy, and even then did Jesus continue walking. 17 And after they had walked some time, Jesus did halt and say, “Listen even unto me, all of you. Heard you already something of the Heavenly Father’s plan for the Son of Man? 18 For it is that He must be handed over to those who will kill Him, yet even for His death, He will rise again among the living three days later.”

19 And the apostles did say nothing for some time. Then Simon did say, “And by He, you mean?” 20 And Jesus did say, “Me. We are talking about Me.” 21 And Simon did say, “People do not usually die and then live again.” 22 And Jesus did sigh and say, “No, this will be a special thing.” 23 And Judas did say, “You want me to take care of whoever hands you over before they hand you over?” 24 And Jesus said, “No, the plan is pretty much set. We’ll talk about that later.” 25 And Thomas did say, “So it will be a trick.” 26 And Jesus did fix Thomas with a look, then did he shrug and turn and walk again.

27 And on the road to Capernaum, Jesus heard nattering amongst the apostles there behind him. And upon arriving at the inn, Jesus asked of what they spoke, and, whereupon he gave them a look that strongly suggested he was in no mood, John did admit they had been discussing who would be first among his disciples.

29 And John did say, “Just to keep the ministry going.”

31 And Thomas did say, “You are talking about, you know, being dead.”

32 And Jesus said, “Know ye this: Whosoever seeks to lead must place himself last of all and serve everyone.” 33 And Peter said, “You mean every one of us. Thy disciples.” 34 And Jesus did say, “No. By everyone I mean everyone.”

35 And John did say, “But what if others drive out unclean spirits but do not do so in Thy name?” 36 And Jesus did say, “Does the spirit leave?” And John did shrug and say, “Yes, but —” 37 And Jesus did say, “Well God forbid then, and, no, don’t take that literally. He who does my work, does the work of Him who sent me, and he who gives you a drink because you are of Him, so they will be rewarded. 38 And if your hand makes you doubt this, cut off your hand, for better to enter unto the Heavenly Kingdom with one hand than to have two in Hell.”

Jesus in the Temple
By Matthew Grimm
Monday, August 4th, 2014