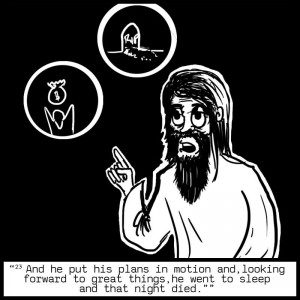 When we last left Pissy Jesus, he and his disciples were on the road to Capernaum, discussing the impending torture, crucifixion and resurrection of the Messiah. Of this last part did the disciples have many fairly well-founded doubts, given the no one ever returning from beyond the grave and all.

1 And they did travel unto Judea and whereupon Jesus halted in the road and turned so to look upon them who traveled with him. 2 And Jesus did say, “What?”

3 And the apostles were confused, and the apostle Nathan did say, “What vexeth thou, Rabbi?” And Jesus answered him, “I would assume you wish to test me further seeing as, upon last headcount, I did not have nineteen apostles.” 4 And Nathan did strip off his common apostle’s robe to reveal his pharisiacal robe and six other Pharisees did likewise. And then the Pharisee said unto Jesus, “What say you of our law of divorce?”

6 And the Pharisee did say, “Surely a great rabbi knows that Moses saith a man may give unto his wife a bill of divorcement.”

7 And Jesus did say, “So we live in a country occupied by an empire of violent Latin shtarkers, infested with hunger and disease, a puppet prince sits upon a puppet throne in our name who beheads people on whim, and, by my best estimate, thirty-five to fifty percent of the citizenry have demons living inside them, and you would seek my counsel on domestic cohabitation.” 8 And Jesus did say, “Right, as it is so pressing a query, the Heavenly Father dislikes divorce of man and woman who have committed unto each other with His blessing and so become one in His eyes, seeing as a husband and wife lying unto each other would then be lying unto God, 9 and this would be a thing to avoid, not to mention extraordinarily pointless. 10 What God blesses is neither yours nor any man’s to unbless, and are we done here or is there something about menses you feel we should discuss?”

11 And in those days men did not discuss such matters and the Pharisees did make certain faces and soon recede as Jesus continued on.

12 And in the next village, a man did come unto Jesus, and he did ask, “Master, pray tell me how I might assure my entrance into the Kingdom of Heaven?” 13 And Jesus did say, “Do you commit adultery, kill and defraud your brethren, steal, bear false witness or dishonour your father and mother?” 14 And the man said he did abjure of all, and Jesus said, “Well you are ahead of the game, then.”15 But the man was not sated and did still fear for his soul. 16 And Jesus saw the fine quality of his robe and the cleanliness of his hands, and he did say, “Oh, wait. You are wealthy.”

18 And Jesus did say, “A man who can expend obsessive worry over his soul enjoys the luxury of not needing to expend similar worry over feeding his family. 19 If you are truly committed to gaining treasure in my Father’s Kingdom, sell everything you have, distribute the proceeds to the poor and follow me.”

20 And the man did look as if Jesus had struck him with a smelt and so departed. And Jesus did realize that his instruction took even his disciples aback, and he said, “So shocked are you, yet did you not leave all to follow me?” And Peter did say, “But we left fish-stench and the surly caprice of the sea; surely men of great bounty bear some evidence of God’s graces.”

22 And Jesus did tell all now gathered around him a story: “A man showed shrewdness in the marketplace and made himself wealthy, whereupon he said, ‘Now that I need for nothing, I will use my wealth to expand my fields and build a greater barn, there to store my fruitful harvest, and thereby will need be banished from me.’ 23 And he put his plans in motion and, looking forward to great things, he went to sleep and that night died.”

24 And the apostles did stare at Jesus. And finally Peter did say, “Ouch.”

25 And Jesus did say, “Ouch indeed. A man becomes wealthy by serving himself, and so becoming blind to true obligation, for one cannot do this and serve God. I cannot state this more emphatically. 26 But let me put it such that simpletons might understand it thousands of years hence: A camel could more easily go through the eye of a needle than a wealthy man could enter God’s Kingdom. It is a super unlikely thing, is the point.”

27 And Jesus did say, “The apostate see wealth and power as things to be gained so to be served, yet the gospel is a different order: 28 Let the rich man become king, but once he is king, let him renounce kingship, for therein lies the only path to true power. A leader amongst us is not served but is servant of all. Follow me if you would serve.”
29 And Jesus did continue down the road, and many followed. And Jesus did call behind him, “Not you, Pharisees.” 30 And some of those following did stop and pretend to do other things.

Pick up the latest copy of La Cuadra Magazine for your mobile device HERE!

The Gospel of Eddie, Jesus’ Business Manager: Into the Wilderness
By Matthew Grimm
Sunday, August 25th, 2013