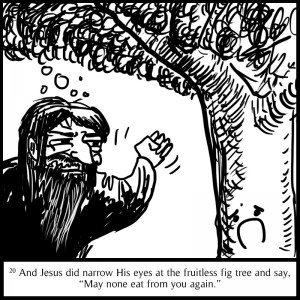 When we last left Pissy Jesus, He and His disciples — and several Pharisees in disguise — were in Judea. After calling out Nathan, the fake Pharisee disciple, Jesus discussed with his followers the rather clearly stated impossibility of a rich man entering the Kingdom of Heaven. They had trouble with the notion.

1 And they did travel unto Jerusalem 2 and, as they passed Bethpage, Jesus did halt and say unto them, “Go thee into the village and fetch for me a donkey colt that I may ride unto the city gates.”

3 And Peter did say, “But, Rabbi, as you are an adult, perhaps a full-grown donkey would better support you.” And Jesus did gesture Thomas unto him and said, “Which is the one with the obsessive brain thing?” 4 And Thomas did say, “Philip.” 5 And Jesus did say, “Philip, what sayeth the Ninth Verse of the Ninth Chapter of the book of Zechariah.” 6 And, as if possessed of a spirit, Philip did say, “Rejoice greatly, O daughter of Zion; shout, O daughter of Jerusalem: behold, thy King cometh unto thee: he is just, and having salvation; lowly, and riding upon the foal of a donkey.’”

9 So James and John did go unto Bethpage and there saw a donkey colt tied to a post and were stealing it when local people saw them, and an old woman did say, “So that is your donkey colt, then.” 10 And James did say, “Well, the thing with that is, we need it for the advent of the Lord.” 11 And the woman did say, “I need to treat King Solomon to a nice lunch, so I should just help myself to your purse?”

12 And John did say, “Surely you have heard of the Lord Jesus who has healed and taught multitudes. For He did say a donkey colt would be here and, lo, a miracle, we beheld even a donkey colt.” 13 And the woman did say, “Right, who would’ve thought there would be a donkey in a rustic village. Fine, take for the big macher, but bring back when you’re done.” 14 And James did say, “Blessed be you, woman.” 15 And the woman did say, “Bring my ass back, I’ll be blessed.”

16 And Jesus did mount and word even did spread of the advent of the big macher on a donkey colt as had been foretold, 17 and people did come to the roadside and gather palm fronds and the leaves of olive trees and lay them before him, and some did cry, “Hosanna!” for something happening that had been written about five hundred years agone did not occur often. 18 And thus came the Lord unto the gates of Jerusalem and it was a pretty nice day.

19 And after quartering in Bethany that evening, Jesus did wake of great hunger and went without to a fig tree, but being groggy and hungry did cloud His omniscience and He forgot it was not fig season. 20 And Jesus did narrow His eyes at the fruitless fig tree and say, “May none eat from you again.” And after seeing Him curse a tree, the apostles did give Jesus a healthy lead as they went again unto Jerusalem.

21 And Jesus did join them who had come in pilgrimage from far lands for Passover. 22 But when they came to the temple courts, He beheld a hive of merchants selling beasts for sacrifice and exchanging the pilgrims’ coin at low low rates, for their foreign coin held graven images and so was forbidden in temple. 23 And even as the scriptures did forbid usury and usury was being practiced at the repository of the scriptures, this did little to improve Jesus’s mood, which he made clear by overturning their tables, casting their wares to the ground, whipping at them with cords and chasing them from the courts. 24 And Jesus did say, “My Father’s house would be a house of prayer for all, but you have made it a den of thieves.”

25 And the Sadducees did emerge from the temple and were about to tell Jesus to desist but, upon appraising his demeanor, they did slowly back into the temple again. 26 And Jesus did turn unto some pilgrims and dropped the cords and he did say, “My Father’s love is free today.” 27 And the pilgrims did cheer and shout “Hosanna!”

28 And the Sadducees did watch from within and one did say, “We’d better start scheming.” 29 And when Jesus and the apostles returned to their inn that evening, they did pass the fig tree, and one did say, “Rabbi, the tree you cursed, it is withered.”

30 And Jesus did say, “Believe truly, and that for which you pray shall you receive. One with true faith might even say unto a mountain, ‘Go, throw yourself into the sea,’ and surely the mountain will do thus.”

31 And Thomas said, “I’m really not sure we are defining ‘prayer’ the same way, but you might not want to leave that much up to interpretation.”

35 And Thomas did say, “All I’m saying is you could just as easily have prayed for a fig.”