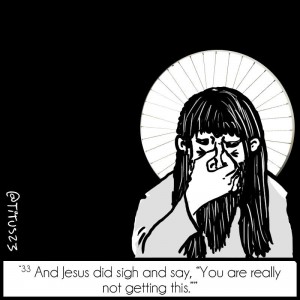 In our last adventure, the Pharisees wore flowerpots on their heads and followed Jesus, trying to catch him ministering on the Sabbath.

1 And when Jesus did realize the sheer volume of demonic possessions infesting Judea, he bade the twelve go forth by twos and he did even imbue them with his powers to battle with the many unclean spirits that infested the people. 2 It would be exorcizageddon, Jesus did say, and it would sweep the vexed land and this time even would it be personal.

3 And Jesus said to go unto their work cleansed of finery and purse, and wear only one coat, for two coats would seem garish for an exorcist.

4 And Jesus did even admonish unto the twelve that whosoever welcome them into their homes, abide them and be a mensch unto them until you leave even without their home. 5 And Jesus did also advise that any who did not receive them into their home, what, they were too good for unclean spirit-cleansings? and even kick the dust off your sandals onto their doorstep and even then that will be testimony that they are guilty of the sin of Sodom!

6 And Matthew did say, “So, those who do not open their house unto us, they will be men who lie with men and abomination?”

7 And Jesus did look at Matthew and furrow his brow, and Jesus said, “Wait, what did you just say?”

8 And John did say, “The sin of Sodom. Faygelehs, right?”

9 And Jesus did say, “What the hell are you talking about?”

10 And Matthew did say, “The sin of Sodom is even that men shall know other men as if they might a woman, but shall be unclean.”

11 And Simon Peter said, “Are those the unclean spirits we are to banish?”

14 And Jesus said unto all of his beloved twelve, “Seriously, have you guys even read the Torah?”

15 And John did say, “Did not God, in Isaiah’s testimony, say even unto man that ‘The show of their countenance doth witness against them; and they declare their sin as Sodom, they hide it not. Woe unto their soul! for they have rewarded evil unto themselves’?”

16 And Jesus did say, “Oh, so we’re just conveniently ignoring Ezekiel, wherein it is explicitly written ‘This was the guilt of your sister Sodom: she and her daughters had pride, excess of food and prosperous ease, but did not aid the poor and needy.’” 17 And Jesus did say, “The sin of Sodom, you idiots, is that greatest of affronts in this land of comity and brotherhood, which is being an avaricious jerk who prioritizes those vanities that are property and profit above common decency and hospitality. 18 Did you even listen to what I just said? Do you understand context?”

20 And Jesus did say, “What? How did beatings even enter into this? And what part of the whole judging-not-lest-ye-be-judged thing have you guys not understood?”

21 And Thomas did raise his hand.

23 And Thomas did say, “Is it in the spirit of comity and brotherhood that you call us idiots?”

24 And Jesus did say, “No, but it is even in the spirit of not bearing false witness, which I would be doing if I did not point out you are idiots.”

25 And Thomas did raise his hand again, but Jesus did say, “This breakfast meeting is over.”

26 And the twelve duly deputized agents of Jesus went out even by twos unto the land and they preached that men should repent and they did kick dust on a few inhospitable jerks and they did also solve mysteries. 27 And, lo, they also did cast unclean spirits out and did help heal infirmities and vexations.

28 And the ministry of Jesus did spread thus, and even more people came unto him in a place in the desert, as sheep to their shepherd; 29 and faced with a new throng in the desert, Jesus even said, “We really need to start planning these things better.”

30 For as sheep in a desert, there was little to eat, and, after he had taught unto them for much of a day, he did send the twelve out to villages in search of food that they might feed the throng. 31 And when the apostles did return with a mere five loaves of bread and two fish he blessed the loaves and fish, and the apostles did take them out unto the multitude, who did eat of it and were made full.

32 And John did say, “Feed you not their soul, Master? Should we really be getting into the business of handing out free food, for will thy ministrations only lead them to indenture and dependency on others for their kindnesses?”

33 And Jesus did sigh and say, “You are really not getting this.”

Read about all the Adventures of Pissy Jesus here.

More cartoons and art by Luis De Leon Diaz can be seen here!

Jesus in the Temple
By Matthew Grimm
Monday, August 4th, 2014