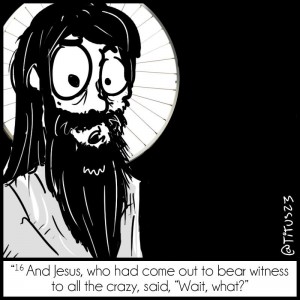 The Bible, the ineffable revealed word of God, has been edited countless times by people you can pretty safely say were seriously arrogant motherfuckers. Profoundly stupid, the Church’s most joyless prigs in the early centuries of the Common Era decided that among the many writings regarding the life of Jesus Christ, only four gospels of His ostensible contemporaries would be considered the canon truth, in spite of the fact that some of them told different stories with separate chronologies.

In the last century, however, remarkable discoveries have revealed so-called “lost gospels,” books discovered by archeologists or intentionally suppressed by the church because they offered not just different details of Jesus’ ministry but curiously different iterations of his philosophy. Iterations that were discounted by the clergy of the time because they didn’t want to seem soft on people predisposed to not live in general ignorance and in constant fear of joy.

One of these lost gospels fell into the hands of La Cuadra recently by way of a guy who stopped by No Sé and looked over his shoulder a lot. He offered it to us if we would buy him a shot. He said it was guaranteed authentic and contained the observations of the little-known disciple Eddie, who mostly served as Jesus’ business manager. We were reticent because, while the parchment looked pretty old, it was written in English and contained a few emoticons, but then we started reading it and were hooked.

The Gospel of Eddie

1 In those days there was a Wild Man of Judea, who was so crazy he wore the  furs of animals for clothing, 2 though the animals weren’t dead yet and bit him; and 3 people came from all around to gawk at him, who was called John the Baptizer. 4 He bade them “Repent!!!” for it was the end of days; and soon unto them the kingdom of heaven would come. 5 And the people said, “You realize how many crazy people have said that exact same mishegas and will probably say it forever and ever and the only people who take them seriously will be idiot chumps who are dumb?” 6 And John the Baptizer said, “Well, this time it is for real.” 7 And one guy said, “Says you, Steinmetz.”

8 So crazy was the Wild Man that he would dunk people under the water of the Jordan River but let them up before they drowned and claim immunity from war crimes. 9 But the people did not like getting wet in their clothes and 10 they did complain to the Pharisees and also the Sadducees, who were then feuding with each other over who was more dope, but 11 they did even put their differences aside at least long enough to chase the Wild Man with sticks.

12 And John the Baptist did shout back at them, “You used to be cool, but no longer.” 13 And he said, “Yea, though you chase me with sticks even though I’ve got bursitis, after me will come a true prophet who fears not sticks or even being executed in the most gruesome way for bringing unto the people Truth of the Father’s great design. 14 That prophet may bleed from His hands and feet where nails do pierce Him, 15 and hang from those nails unable to support Himself for great hammers will have been used to smash his legs.

16 And Jesus, who had come out to bear witness to all the crazy, said, “Wait, what?” 17 And John the Baptist dunked him in the water and got his clothes all wet.