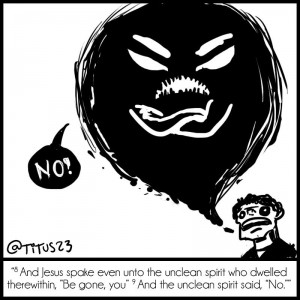 In our last adventure, Jesus had just emerged from 40 days in The Wilderness with Satan.

1 And Jesus went unto the Sea of Galilee, whereupon he met fishers, 2 who fished, 3 and he said unto them, “I will make you fishers of men.”

4 And Simon, who fished, said, “Have you tasted men?” And he and his brother Andrew did laugh and may have been drunk. 5 And Jesus said, “Joke as ye may, but I hie now to perform exorcism.” 6 And the fishers and John and James, who also fished, followed, as they could fish any day but could witness exorcism somewhat less often.

13 And the unclean spirit did emerge a blue glowing vapor and did fly out of the synagogue and went unto the Great Temple where it did hide in the Ark of the Covenant. 14 And word of the spectacle did spread, taken hither by drunken fishermen.

15 And others hearkened and came even unto the inn where Jesus stayed to petition his ministrations. And Jesus did go to the door and when he saw the throng, he did also shut the door again. 16 And Jesus said unto Simon, “This land does seem overly abundant with possessed people.”

17 And Jesus did open the door again and say, “Verily, I need you to form a single line and give your information to my people.”

18 And one of the unclean spirits did shout, “No!” 19 And another guy did shout, “And how will we know them who are your people?”

20 And Jesus said, “They will be distinguished by the punishing odor of fish and wine. Now before we start, how many might even be affecting vexation just to get out of work?” 21 And two people did raise their hands. And Jesus did say, “And remember I am Son of a Heavenly Father Who Sees All.”

22 And twenty-seven more did raise their hands and depart of sullen visage. And Jesus did heal afflictions and vexations of those who remained, 23 and he did traverse throughout Galilee doing good works and solving mysteries.

24 And yet more followed who were itinerants and indigent, and a wealthy man greeted them and did invite all to sup with him at his table. 25 And a nosy Pharisee did see the gathering, and he asked why Jesus might break bread with those of plighted health and little coin. 26 Jesus did say unto him, “I came to bring not the Word to the Righteous, but sinners to repentance. How many healthy people do you know who go to the doctor?”

31 And the Pharisee said, “I think you might still be being rude.”