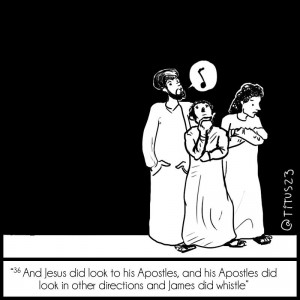 In our last adventure, Jesus cast out evil spirits and dined with the infirm and poor, and one douchey Pharisee.

1 And Jesus did go unto the vexed and infirm and cured them, 2 and lo the Pharisees did follow even as they did peek around corners and pop up from garbage cans with the garbage can lid still on their Pharisee hats, and they did even take notes. 3 And only when Jesus healed a man with a withered arm on the Sabbath did they reveal themselves and say unto him, “Know thou that it is forbidden to do these things on the Sabbath?”

6 And them who had been burned did go even unto their brethren and tell of their having been burned, 7 and they all did go unto the palace of Herod to suggest Jesus and his following be made like unto persons of interest.

8 And when news did reach the far lands of how Jesus did reanimate living tissue and also did totally burn the Pharisees, many more did flock even unto the Sea of Galilee to see Him. 9 And when Jesus and his Apostles did behold the throng, the Apostles did fear for the safety of Jesus 10 and did take steps to insulate Him, whereby they did secure a boat that he may take into the sea there to minister from 11 and they did bolster his security retinue with eight more faithful, which did include a Sicarius assassin who was called Judas and a Zealot dissident also named Simon.

12 And after ministering, Jesus did go unto the multitude and did heal infirmities and cast out unclean spirits. 13 And the Pharisees, now disguised as trees, did as them of conservative mind do and blamed things they did not understand on the Devil, 14 that they might sway hearts against Jesus. 15 And they said unto Jesus before the throng that only by the power of Satan might He cast out Satan.

16 And Judas did ask Jesus if he should stab the Pharisees and Jesus bade Judas that he might settle.

17 And Jesus did say unto the Pharisees, “How, conspicuously talking trees, can Satan cast out Satan? And if a kingdom be divided against itself, that kingdom cannot stand. 18 And if a house be divided against itself, that house cannot stand. 19 And if Satan rise up against himself, what, does that mean there is a Good Satan? How would that even work?”

20 And Jesus said, “Verily I say unto you, All sins shall be forgiven unto the sons of men, and even their blasphemies, for look ye unto my mother and my brethren, and then even unto yourselves, for whosoever shall do the will of God, the same is my brother, and my sister, and mother. And verily ye shall avoid eternal damnation.”

22 And Jesus did say, “Dwelling forevermore amid the torments of Satan in his abode of Hell.”

24 And another man did say, “Regular Satan or Good Satan?”

26 And the Pharisee trees did snicker. And Judas did unsheathe his dagger, but Jesus did stay him with a hand on Judas’ shoulder and did also cure a previous rotator cuff injury from stabbing.

27 And Jesus did say, “Fine, verily would you even see damnation for yourself, roll the dice. Let’s say you can be damned for blaspheming, I don’t know, the Holy Spirit.”

31 And Jesus did say, “It is the essence of the works of the One True God, the Heavenly Father, as if his very breath.”

34 And a woman in the throng did say, “So it’s something we have to worry about blaspheming about but it’s not the One True God before whom we are forbidden to have any other Gods.”

35 And a man in the throng did say, “That seems pointless and arbitrary.”

38 But the Apostles Mark, Matthew and Luke were even then talking amongst themselves and did not hear the last part.

Click here for Part I, Part II, or Part III