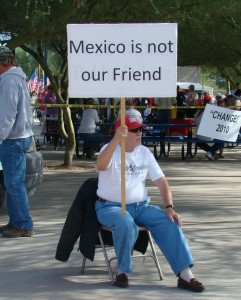 According to a story published by American Progress, “The Tanton-owned Social Contract Press publishes the views of white nationalists, such as John Vinson, including a gem about how God prefers racial separation. Tanton also publishes “Camp of the Saints,” a racist screed [by the French author, Jean Raspail,] that uses fiction to warn white Europeans about an impending invasion of immigrants from India who will overrun the government, kidnap white women and make them into prostitutes.”

That report also traced the sources of the money Tanton used to found FAIR. Much of it (over one million dollars) came from “The Pioneer Fund,” one of the last remaining financial supporters of eugenics research in The United States. Further reporting by The Rachel Maddow Show reveals the following: The Pioneer Fund “describes itself as based ‘in the Darwinian-Galtonian evolutionary tradition…’” and that it has, for the last 70 years, “funded controversial research about race and intelligence, essentially aimed at proving the racial superiority of white people. The group’s original mandate was to promote the genes of those ‘deemed to be descended predominantly from white persons who settled in the original 13 states prior to the adoption of the Constitution.’”

But we should close this section with an observation made by the FAIR founder himself. In 1997 Tanton told the Detroit Free Press that America will soon be overrun by illegal immigrants “defecating and creating garbage and looking for jobs.”

So, despite protestations of racial neutrality by the authors of Senate Bill 1070 and its supporters, it is deeply important to consider the worldview that drives them to craft such laws. While their words, at present, may be soothing, their intent is anything but. Though they would deny it to their dying breath, they are racists and they have drafted a bill designed to fan the flames of racial animus in American society.

It is what they do, and it is done in service to the “one big thing they know.”

What Are The Foxes To Do?

Currently there are an estimated 12 million undocumented aliens living in the United States. Of that number, Arizona is home to over 250,000. They are there for reasons that are inescapable and economically rational. There is a socio-economic pump along the border that has, for over a century, driven migration from south to north. In many important ways, it is the same pump that drove immigration from East to West, first from the East Coast of those “original 13 states” to the Mississippi River Valley and then onward to the formerly Mexican territory of Arizona. It’s a pump that is a part of nature. A state of high pressure, a land of relative hardship and lack of opportunity, will tend naturally to flow into a state of lower pressure, a land of fewer hardships and greater opportunity. Any rational Fox will tell you that this is the nature of the world, and there is little chance that you will end it. It’s not a belief, it’s an observation. Squeeze a balloon and it’s proven.

Furthermore, any rational Fox will tell you that the nation on the receiving end of the migratory flow can act to stanch it. Build a wall. Increase border patrol allocations. Increase fines and punishments. But, unless you are willing to ratchet up your OWN level of hardship, violence, insecurity and lack of opportunity to the point where it is greater than the hardships, violence and insecurity on the other side of the border, then it isn’t going to stop.

The Hedgehogs who are driving this debate know only one big thing. In this case it is “These people must go!” To a Hedgehog, all other issues can be, must be, subjugated to that final goal.

This is a harsh observation, but note that the goals of this law (the removal of as many undocumented aliens from Arizona as possible) come at the cost of turning neighbor against neighbor, employer against employee, the community against the police, and the police against the community. It is a law seemingly designed to bring dysfunction to Arizona society and it will have grave consequences, not only for undocumented aliens, but for Arizonans as a whole. Consider this: if a crime is committed (a robbery, a mugging, a rape, gang activity in a neighborhood, human trafficking, et. al.) and a witness is without papers, does this law make it more or less likely that they will come forward?

This law has stirred deep anger in The United States and around the world, and Arizona stands to be labeled a pariah and subjected to severe economic stress do to boycotts, lost tourism, and the departure of a significant part of its consumer market and workforce.

Senator Pearce and the other supporters of this law have put Arizona in the path of a storm potentially much larger than the one they currently confront. That is a reality they seem unwilling, or simply unable, to comprehend as it falls outside the purview of the “one big thing” they know.

Finally, the Foxes should understand that this Arizona law is anything but a last step. Congressman Hunter, called it “a good starting point,” and indicated that he’s willing to move further down the road, even up to the deportation of American citizens with foreign “souls.” Would he find an ally in the likes of John Tanton or J.T. Ready? More than likely. Would he find allies in the Arizona State House? We may soon find out.

Calling out the Hedgehogs is important, but as Isaiah Berlin argued years ago, we should not imagine that they will change their minds. Pearce, Tanton, Congressman Hunter and many, many more actors in this debate perceive, and will continue to perceive, themselves as good people doing the hard work of setting the world right. They are wedded to a fundamental worldview that guides their actions. They are Hedgehogs. It’s what they do.

Still, the Foxes should call out to one another, and share the many things that they know. The hope is that, somehow, through those conversations a pragmatic, imperfect solution will be found to a problem of enormous complexity and profound consequences. Solutions that will not require minefields, deportations of U.S. citizens, racial profiling or fundamentally altering the natural relationships between law enforcement and the communities they serve.

Foxes should keep trying to solve the problems pragmatically. It’s what we do.