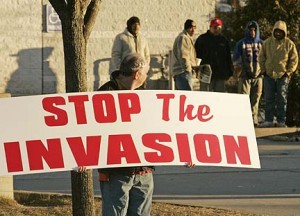 William Daber, a Farmingville resident, holds a sign that reads “Stop The Invasion” as he looks back at day laborers in Farmingville, N.Y., Saturday, Jan. 7, 2006. (AP Photo/Ed Betz)