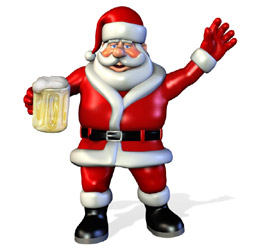 The Christmas Season is upon us, and even the Surly Bartender is getting in the Spirit.  The lights are up in the Parque Central, an adorable new collection of Dutch Girls are visiting Antigua on their winter holidays, and I’m not living in a New York City where, global warming or not, the weather is surely far shittier there than it is here.

I tried, I really tried, to be surly this month, but I’m just in too good a mood.  Now, mind you, for the Surly Bartender, being in a good mood still involves getting pissed off at the incredible stupidity I see around me on a regular basis, but this time I’m doing it with a smile on my ugly mug.

So, this month, rather than railing against hippies, or governments, or the ahistorical harpies on the nightly news, I’d rather just share with you  a dream and some thoughts on religion and spirituality.  And, in the spirit of giving, I’ll offer advice on how we might be able to heal our perpetually benighted world.

So, to all my readers – Merry Christmas and a Happy New Year!

I have this dream. It’s a wonderful, visceral dream.  In it Jerry Falwell’s bovine and inert form is sprawled on the floor his office.  His right hand is clutched hard to his chest, like Fred G. Sanford’s after some really bad news.  By his left hand, on the floor, are the remnants of a roast beef sandwich, slathered in Miracle Whip and ketchup – which he has also dribbled across his bib.  His pudgy eyes are seared open, and his mouth seems to be forming the rounded first syllable of a grand, “Ohhh, Shit!  Really?”

He looks, in my dream, like a man who has just seen the face of God, and God is not smiling.

Even at Christmas I have little tolerance for fundamentalists of any religion, and Jerry Falwell was certainly one of the worst.  On September 13, 2001 the Rev. Falwell claimed on national television that the reason God let Al Qa’ida attack the United States was because of the feminists, gays, pagans and “the Christ haters” who were trying to “secularize America.”

That fat bastard kicked the can a few months back, and thankfully, he won’t be with us to toast in the New Year.

If I could find my way to his grave I’d dance a jig on it.  Anyone who has the arrogance to presume inside knowledge of the infinite, and therefore has the right to chide others who reserve the right to doubt is a danger to public discourse.

If you’re opening axiom is “God Told Me the Truth,” you’ve willingly taken yourself off the debate team.  To me, a God who has revealed himself to the few at the expense of the many is a joke.  What, an omnipotent power couldn’t whisper into everyone’s ear at the same time?  So, instead, he chooses a few pudgy fingered scolds as intermediaries?  That’s just dumb.  That is just against reason.

Moreover, I have trouble imagining the Pearly Gates proceedings wherein the Almighty, from his seat on high, casts into darkness anyone who has had the cojones to use the brain that God gave to them.

I do not doubt that God could exist.  I just find it hard to believe that, if he does, He is a Dick.  Fundamentalists who believe that God created man in his own image (except for the dirty bits either between our legs or between our ears, of course) are fools of the silliest sort, and they deserve to be lampooned with that other great God given gift:  our sense of humor.

Hey, come on, don’t you think that if God exists, he’s got the best laugh you’ve ever heard?

Recently, in the United States – and throughout the world – religious extremists have been a hoot for those with the good sense to snicker at their silliness.

Take, for example, the recent revelation by Pope Benedict (who I believe played the lovable postman, Cliff Claven in the 1980s sitcom, Cheers before joining the clergy).   I’ve got nothing personal against the Pope, he’s probably a great guy, but one of his recent pronouncements made the Surly Bartender’s belly shake like a bowl full of jelly.

The Surly Bartender - Honesty in Discourse