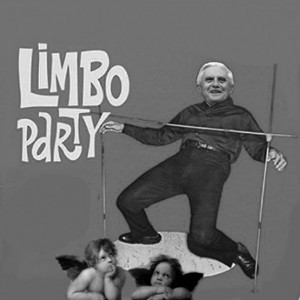 This past Spring, Pope Benedict gave signals that he was going to recant on the Catholic cant that all un-baptized babies are bound to spend eternity in Limbo – a sort of rainy mall parking lot of the soul.  To be fair, the Pope has since given indication that he might recant on the recantation, so… I guess… the very notion of Limbo is currently in Limbo – a tautological ha-ha if ever there was.

But if Limbo has, in fact, been foreclosed, several ominous theological questions arise.  First, what of the hilarious root Catholic belief in Original Sin, the idea that an act of disobedience by a mythically and mystically innocent original ancestor with a predilection for listening to talking snakes rather than a disembodied voices from the heavens condemns us all to be born in corruption?

Second, if Limbo is on the outs, what will become of those billions of un-baptized babies?  Do they go North or South?  If they head South, then, once again, we’re back at the conclusion that God is a Dick, casting babies into the pit for a sin of which they were unaware, and for which they could never have begged forgiveness.  If they head North, then forget the housing crisis in the United States and get to investing in cloud-front property in the hereafter.  Even if the limbo babies go to live with their relatives, Heaven would look a lot more like New York City in the tenement days than a suburban utopia where we’re all playing harps around the backyard BBQ.

On the other side of the world there is bad news for our Muslim brothers.  I’ve recently read that the Hadith doesn’t promise 72 virgins to those who die in the service of Allah, but rather – due to a mistranslation -72 white raisins.  Which, in some grand alignment of the cosmos, was the exact number of raisins that you’d get in those little cardboard boxes that you’re vegan neighbors gave out on Halloween night – something that drove this young soul to his first act of juvenile terrorism; though, admittedly, it wasn’t “God is Great” I screamed as I hucked rotten eggs at their house.

But by far the funniest bit of foolishness that religious kooks have cooked up recently is the creation of a creation museum.

The Answers in Genesis Creation Museum, as it is officiously known, is a $27 million dollar idiocy for the mullet sporting set, located on I-75 just shy of Cincinnati and the 21st Century.  In this museum visitors get, for 20 bucks a flattened head, a tour of a Fred Flintstonesque Garden of Eden, complete with a few frolicking, friendly Tyrannosaurus Rex and a Triceratops that your toddler can ride to get to the Bedrock of their belief system’s experience.

You see, science – that evil creation of man’s reason – has discovered all kinds of uncomfortable truths for those who believe in the surety of The Word.  For them, the Answers in Genesis Creation Museum is there to set the record straight.  The Bible says that God created the world, and everything in it, in 6 days.  Thus, Adam and Eve lived in a Paradise with all the creatures that walked upon earth – including dinosaurs!  Nothing could be clearer!

Also, The Answers in Genesis Creation Museum takes the time to explain how the Grand Canyon was created in a few months by the Great Flood.  Now, this got me to thinking – a dangerous thing to do around Fundamentalists – about the Flood itself.  I went back to the Book of Genesis to get some answers.

Genesis indicates that, as God was mightily pisses at the wickedness of His creation, He caused the waters of the Earth to rise and cover all.  Yet, He commanded Noah to build an Ark that would bear all the animals, two by two, to safety.  Now, that would have to be a pretty big Ark, seeing as it would have to hold everything from boll weevils to brontosauri.

According to Chapter 6, Verse 15 the Ark was to have the dimensions of 300 cubits in length, by 50 cubits in width, by 30 cubits in height.

But how big is a frigging cubit?

Well, Chapter 7, Verse 20 claims that the Lord caused the waters to rise 15 cubits to cover every mountain on the earth.

Oh, wicked men of reason… do the math.

If Mt. Everest, the highest mountain on the earth is roughly 30,000 feet high, that means that one cubit equals 2000 feet.  Thus, did Noah, in short order, create a boat 600,000 feet long, 100,000 feet wide and 60,000 feet high!  It was a boat over 100 miles in length and twice as tall as the highest mountain on the Earth.  Climbing to it’s deck would require  bottled oxygen!  The temperature  near its mast heads would be 140 degrees below zero and the winds would gust up to 700 miles an hour!