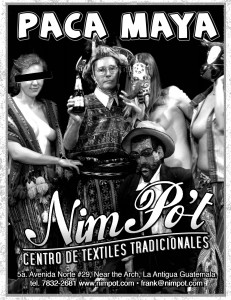 Not a small number of readers have written in to inquire about the ethnographic content of Nim Po’t’s (charming) advertisement in the last issue of La Cuadra.

Well, in the first place it all goes to show that participant observation can be a grueling experience in the contested, multivocal and polysemic sociopolitical reality of the modern fieldwork site. Anthropology’s not all just taking notes in a comfy air-conditioned library, y’know!

But quite apart from the ‘metatext’, what we see depicted here is a scene from a traditional Guatemalan loa known in certain parts of the altiplano as ‘La Pasión de Sta. Inés’ or ‘La Cortesana’, but most commonly by the name of Las Diablas (The She-Devils).

Loas are a form of dramatized moral tale of the struggle between Good and Evil, often accompanying festive processions, and featuring Biblical characters, devils and angels, together with anthropomorphic animals and personified virtues and vices.

Of medieval European inspiration, these moral vignettes were introduced by the Spanish friars as part of the evangelizing endeavour. Their spiritual orientation and subject matter found resonance in a similar pre-Columbian theatrical tradition however, and so contemporary performances – like the masked dance-drama – are thus fusions of pre-Hispanic and Old World influences, as well as later Colonial-period elements.

As the photograph clearly shows, The She-Devils, in common with other loas, features protagonists from both Christian and indigenous Maya mythologies, but, unusually, the majority of roles are taken by women, thereby constituting the performance as a celebration and propitiation of female emancipation through an anti-hegemonic enactment of feminine empowerment and reproductive energy.

In this particular scene Christian orderings of moral space – sinister and dexter – are preserved in the respective orientations of the forces of Good and Evil: La Borrachera (‘Drunkenness’, portrayed as an indigenous woman), is tempted into sin/waywardness by The She-Devil and Bull-Headed Woman on her (weaker) left, while the Virgin Mary tries to draw her back towards the path of righteousness.

Here, the Virgin gives birth not to the Infant Jesus, but instead to Maximón – regarded in Santiago Atitlán as the brother of Christ. It is said that she wears a blindfold so she cannot see that the Christ-child has been substituted by his sibling, the Mayan deity of ambiguity and lasciviousness.[1] The substitution of a Mexican beer for the more traditional fermented maize drink, chicha, likely dates from the late-nineteenth century migration of ranchers from the north.

While loas are performed chiefly around Christmas, Las Diablas has recently been gaining in popularity as a vehicle of cultural reaffirmation at ferias and titular festivals as well as “despedidas de soltero,” known some miles north as “Stag Parties.”

Just Damn Funny - The Tale of the Talking Dog