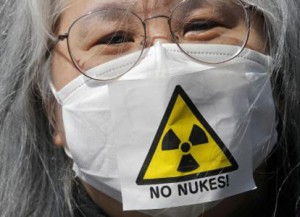 I think I have something! I recently read about restaurants in New York and California using hand-held Geiger counters to check the fish they have imported from Japan. That’s kind of funny.

I can envision the menus of the future: “Dear, why don’t you order the BP Louisiana Crab Cakes with the Light Crude Salsa and I’ll order the Low Level Radiation Yellow Tail Tuna with the Leukemia Prophylactic Sea Mouse. Then we can share. I love sharing.”

There was the article about the Russians who just sent back a shipment of cars from Japan because they registered high levels of radiation.

“Those cars we bought from Japan, they are glowing, Boris. Much radiation.”

“Strip out engines and stereos. We sell those on black market. Then send cars back and tell them not to fuck with us or we will make borsht of their loved ones.”

Here’s one more Fukushima funny. US Ambassador to Japan, John Roos, last month made a public display of support for Fukushima products by visiting a shop in Tokyo and buying Fukushima sake purportedly as a gift for his wife.

This is the man the president of the United States hired because, as he put it, Roos is “somebody of superb intellect and outstanding judgment.” Wow!

“Welcome home, baby. How were things today at the office?”

“Oh, not so bad. Things are little crazy with the nuclear thing melting and all, but overall it was a good day. Did some shopping, thought maybe I’d take a martial arts class. And look, I bought you a gift, a nice bottle of Fufushima Sake. It’s got an extra kick.”

“Oh honey, you’re so sweet and thoughtful. I love you.”

Is there anything else that has me tickled cutaneous-radiation-syndrome pink? Oh yes, here it is, the biggest knee-slapper of all, the giant guffaw, the choking  cesium 137 chortle:  Nuclear Energy, now more than ever, is being flogged around the world as SAFE, THE FUTURE, THE SALVATION FOR GLOBAL WARMING, THE GRAND SOLUTION TO OUR EVER-GROWING ENERGY NEEDS.

God that’s funny. I love that one. Sheeeit. I’m laughing so hard I’ve got the hiccoughs.

In 1976, at the ripe age of 16, a few friends and I hitched hiked toward Riverhead, Long Island, about 25 miles from our hometown of Huntington. We hitched out there to protest the building of the Shoreham Nuclear Power Plant. We were young, long-haired, bell-bottomed and probably a bit stoned.

But we were also concerned, and not naively as it turns out, but rightfully. We had read somewhere, probably a pamphlet handed out by Nader’s Raiders (an environmental and consumer activist group formed by the then young Ralph Nader), that several of the engineers who had worked on the project had resigned over safety reasons, saying 1) there was no safe evacuation plan in case there was a serious problem at the plant (imagine the chaos of hundreds of thousands of cars racing towards New York City on already traffic-jammed highways); 2) the plant was too near the MacArthur Airport and that an accident involving a jet could be disastrous; and 3) the plant was built dangerously close to the Long Island Sound and that any form of radiation leakage would be harmful to both marine and human life. Also there was evidence of Mafia involvement in the building of the facility which lent further concerns as to the quality of the construction.

It seemed to make sense to me. Shoreham Nuclear Plant: BAD. So off I went to protest. This was still a time when teenagers and some of their elders were concerned about these things and protesting seemed to have some impact.

At the protest my friends and I hung around the fringes, listened to some speeches, and collected more flyers from tables from a number of anti-nuclear energy groups. The police were there to keep order, and it was a good thing because across the street was another group, those protesting for the building of the plant. For the most part this group was an angry mob and ready to break heads.

What impressed (or perhaps depressed) me most — and this is probably why this memory is still so vivid to this day — is that their signs and banners were painted with slogans like Shoreham Means Jobs, and Don’t Take My Father’s Job Away.

There were others touting the safety of Nuclear Energy, but the ones that stuck with me were the ones that framed the argument in terms of jobs. There did not seem to be anything rational about it at all. It just seemed plain moronic. “We need work today, good paying work, so why should we listen to your bullshit of potential disasters tomorrow. Our experts say it’s safe, so it’s fucking safe. Now get the fuck outa here.”

I remember hitching back home and thinking, “Do people really think like this?” I think up to that point I had a different perception of mankind.

In the ensuing years I kept up with what was taking place at Shoreham. The plant’s construction was halted and then started again, protests mounted and then dwindled, a portion of the plant was activated and so on . . .

Nuclear energy and nuclear weapons continued to be a hot topic of public and political debate. Those pro-nuclear energy continuously proclaimed the safety of it, that measures had been taken to make the plants fail-safe and that protesters were alarmists who did not understand science.

Meanwhile those against nuclear energy continued to warn of human error, that there is no place safely to dispose of nuclear waste, cancer, half-lives of radioactive material and the like. Then, three years later, on March 28, 1979, on my 19th birthday, I was awakened by the clock radio. I was in my college dorm and a bit under the weather as I had celebrated the night before. The voice from my radio said something about a nuclear accident. I was not sure if I heard it correctly. I turned up the volume.

The Three Mile Island nuclear reactor in Pennsylvania had a stuck valve. There was the possibility of a core meltdown. A state of emergency had been declared. People were being evacuated from the immediate area.

To this day Three Mile Island is pegged in my mind to my birthday as a reminder of a horror just barely averted. Such shortsighted arrogance.

By the early 1980s Three Mile Island was already beginning to vaporize in the consciousness of most outside of the immediate area. It quickly became the era of Thatcher and Reagan, of breaking unions, cutting social spending, environmental and financial deregulation, free market hocus pocus, gutting of funding for renewable resources like solar and wind by 95 percent . . . bullshit ad infinitum.
Pages: 1 2 3

The Surly Bartender - Dear Senator Cruz, The Founding Fathers Think You Are a Dick