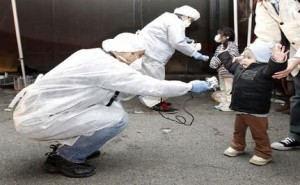 The world (meaning Great Britain and the United States) was going to adopt that cheery can-do attitude, and wrench itself from any of the social concerns of the 1960s or 70s. Red and Yellow power ties were sold by the truck load, Wall Street and world markets began to soar, protected lands were opened to drilling for oil, cars began to get lower and lower and lower gas mileage as they grew to obscene proportions, and for the most part 15 years of environmental regulation was either gutted, negotiated to meaninglessness, or sold off.

The media mantra that nuclear power was safe and would lead to energy independence was at a constant hum until, for most, it became conventional wisdom. Nuclear power was one of those things you no longer had to worry about. Whew!

The Chernobyl nuclear accident/disaster occurred 25 years ago in 1986, on April 26. It was, until recently, the worst nuclear disaster to date, and is one of 2 classified as a Level 7 in the International Nuclear Event Scale, the other being Fukushima. It remains to be seen how bad Fukishima is, but many are beginning to believe that Fukushima will prove to be far worse than Chernobyl.

Dr. Helen Caldicott, perhaps the most influential environmental activist in the past 35 years, who the The Smithsonian Institution named  as one of the most influential women of the 20th century, called the situation in Japan an “absolute disaster” that could be many, many times worse than Chernobyl.

Chernobyl was a disaster for the environment, the then-Soviet economy and for hundreds of thousands, perhaps millions of Ukrainians. Fukushima will be the same, to one degree or another, for Japan and far beyond.

To put a human face on the Chernobyl disaster, and to provide context for understanding what are the potential results for Fukushima, Greenpeace recently took a group of 70 journalists from around the world to visit Ukraine. They went to see for themselves the effects of Chernobyl 25 years later.

According to Greenpeace here is what those journalists saw or heard during their trip:

● Every year Ukraine’s government needs to spend between six to eight percent of the budget to cope with the consequences of Chernobyl.

● Tens of thousands of Ukrainian children need to be sent away, every year, to uncontaminated areas for at least a month in order to allow their bodies to get rid of some of the Cesium-137 accumulated through eating common foods like milk, mushrooms, berry jam and meat.

● Food sold in every market needs to be tested for radionuclides like Cesium and Strontium.

● Children from the town of Rokytne get tonsillitis several times a year because their immune systems are compromised by radionuclides. According to a deputy health administrator from the district hospital, two-thirds of the 53,000 people living in Rokytne are affected by Cesium-137 contamination in food.

● Rokytne is 300km away from Chernobyl, on the other side of the country.

● Local health and sanitation officers in some areas make maps to inform local communities where radiation hotspots have developed and thus unsafe for travel.

● School children in Ukraine are taught the practical steps of radiation safety, and do emergency drills wearing gas masks.

● Young expectant mothers get advice about what food they need to avoid, in order to minimize radionuclide uptake, which can cause deformity in the developing fetus. They require frequent checks and if the fetus develops serious deformity then it may have to be aborted.

● Radioactive waste containment and management have become an important sector of the economy because of the Chernobyl disaster. The original sarcophagus, hastily built in the months after the accident, was designed to last only 25-30 years and is now at risk of collapse. Underneath this sarcophagus  the destroyed reactor is still extremely radioactive and cannot be dismantled safely.

● It is considered impolite to ask workers building the new sarcophagus about their personal radiation dose. If it reaches the legally proscribed limit, they will lose their job.

How’s this? The New York Academy of Science, a 200-year-old organization and the third-oldest scientific society in the United States, an independent, non-profit organization with more than 25,000 members in 140 countries,  estimated in their 2009 report, “Chernobyl: Consequences of the Catastrophe for People and the Environment” that the number of deaths attributable to the meltdown is approximately 980,000. Most of these deaths were caused by cancer.

So where does this leave us? One thing we know is the assurances of business and government leaders mean little and that the odds of another disaster are likely, not unlikely. Think of it this way. There are some 442 nuclear plants around the world. The US has 104 and France has 58. Japan comes in third at 54 (now minus one.) But since 1957 we have had four very grave nuclear accidents, Windscale in Britain in 1957, Three Mile Island in the United States in 1979, Chernobyl in the Soviet Union in 1986, and now Fukushima in 2011. By my very terrible math that means there is about a 1 percent failure rate over 50 years, (4 accidents in approximately 400 plants) not the near impossible, infinitesimal number of which we have been assured.

It’s High Time to Call Them Out, Starting in Arizona
By Michael Tallon
Monday, February 17th, 2014