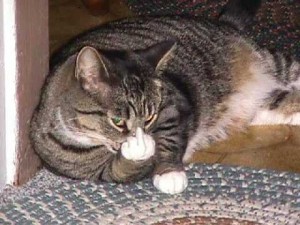 And I thought that the Surly Girlfriend, the life long cat hater, would remain on the same page. I remember, when we first started dating, I’d visited her in her home in Santa Ana where lived a few semi-feral cats that would scurry about in the rafters and hiss whenever she came into the room. But then, half a year ago, she went to San Pedro for the weekend and somehow became enamored with her friend’s kitten, from all reports a downy ball of fur surrounding a sweet temperament and a happy cuddle. When she came home it was all cat talk all the friggin’ time.

“I really want to get a kitty.”

“Can we get one, pleeeeassssseeeeeee?”

She said she wanted one and would take care of it, clean the crap box, buy the food, manage the fleas, etc. Under those conditions I was willing to consider the option.

Given my marginally positive inclination towards cats, and coupled with her sexy accent and my being as enamored with her as she was with the concept of a kitten, I was a fairly easy mark. In principle, I agreed that a cat was not out of the question. I guess you could say that I was fine with the potential existence of a cat in my life. I even toyed with the name Schrodinger, but realized that once the cat was actually present, the joke wouldn’t make any sense at all.

Then came the walks through town, leading us by all the pet store windows on the Calzada Santa Lucia and the milky-eyed, early-onset-mange-infected flea bags found there. Her attraction to such beaten and bedraggled creatures only left me wondering if that’s how she decided to take me in all these years ago. And not wanting too much competition in the “beaten and bedraggled” arena, I kept putting off the purchase.

Too long for her, as it turns out.

One afternoon she returned to the apartment with a box. In the box was a tiny and terrified jet black kitten, maybe 6 weeks old. It seems that the kitten had been transported to Antigua from the City, in said cardboard box, strapped to the handlebars of a motorcycle being driven by a lunatic. For the first week or so, all the cat did was shake like a drunk in detox or bolt for the nearest dark corner of the apartment, hiding beneath the bed, the dresser, the pila or the dirty sock pile. And thus she earned her name, Shakes, The Prison Break Cat.

After a number of days bribing Shakes with tuna, she began to come around and in time she became the second cuddliest member of the Surly Household. And as she has grown, she has become a truly beautiful cat. She’s still jet black, with shiny, supermodel fur and a grace that is wonderfully complimented by a playful, grab-at-your-ass-when-you-walk-by-the-sofa fitfulness that is positively endearing. She does take after her mother, I must admit. And, logically, it seems that her lovely nature and cat-sexy looks (combined with the fact that we’ve yet to get her fixed) has drawn the attention of a number of the local Toms.

As Shakes’ father of sorts, I hate those fucking cats.

And, yes, I know that this situation could be surgically resolved, but along with being Surly, I’m Broke and Lazy, too, so get off my ass.

One tomcat, in particular, has been the bane of my existence for these many months. It’s a big, gray tabby with black stripes.  Certainly not the type I’d choose as a partner for my little girl. Shakes, however, seems quite taken with him and a few weeks ago he moved in without parental approval. I’d get home from the bar at ass o’clock in the morning and find him sleeping on the big pile of clothes that mark the approximate location of the top of our coat rack. I know now that I could have handled the situation much better, but my general reaction was to hiss or scream at the intruding little fucker – at which point he’d piss on our clothes and run for the rooftops. When the hissing and screaming didn’t have the desired effect of making his unwelcome felt strongly enough, I took to hucking chunks of potato at the bastard. Note to readers: watching a drunk hurl potatoes at a rather lithesome cat at 4 in the morning is heeeee-larious. Never once did I catch him squarely. There were a couple of foul tips, but nothing ever really connected. Then I moved on to the slingshot – with even more comedic results. Picture this: a teetering 200 pound biped, with fully extended, market purchased, slingshot – a small rock as projectile. Mancat was on the railing of our terrace, not 10 feet away. I eyed him good and released.

The rock lofted gently, for approximately thee horizontal feet, and landed with a splash in my last beer.