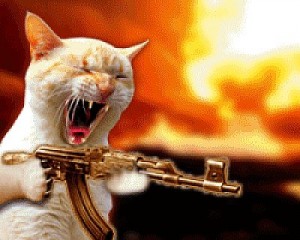 The next step in my escalating war was to take a trip to Price Mart in order to buy a BB gun, but I never made it that far as Mancat made a tactical mistake.

To understand the battle and the strategic planning that went into my assault, one needs to know the geography of my apartment. I live on the upper floor in one of Antigua’s few two story buildings. Like most homes in our small town, our living space is open to the outside with a main living-room / kitchen area which connects to a 15 foot hallway. On one side of the hallway is our bedroom, on the other is a railing above our downstairs neighbor’s garden. Straight at the end of the hallway is a guest room, and to the right is the patio / pila area. Above the pila is a ten foot wall that provides security from thieves, but not from the neighborhood cats that live in the world above, on the walls between the homes.

My thinking was that if I could ever trap the little bastard in the back room (from which there is no escape) and if I could grab him and get him to the street, he would forever be cut off from the roof, and therefore, access to my sweet little pussy cat.

One particular evening a few weeks back, Mancat came a’creeping. I was on the couch, potato at the ready, which I launched at him, just missing his whiskers. He arched his back, did an aerial 180, hit the afterburners on the hardwood floor and screamed, hell bent on escape, into the back bedroom.

Ha ha ha! The Surly Cat Hunter had him!

I entered the room like Roy Baty from Blade Runner and dramatically closed the door behind me. The cat was hiding under the bed. Growling. I poked with a ruler, and it bolted to the door – trapped. I moved to the door, and it ran between my legs. I lunged straight down and tried to grab him. My forward, and downward, momentum sent me crashing onto my head in an unwanted, drunkards somersault. Mancat was back under the bed. Regaining my feet, I threw the bed onto its side and Mancat made for the darkness under the dresser. Again I lunged. As I did my right foot hit a Gatorade bottle that had been on the nightstand, which rolled me into the closest thing to a split that I’ve been able to accomplish since my gymnastics classes when I was 10. Something popped in my lower right back. I remember wondering, “Can you pop your liver?” but later dismissed the thought when no blood leaked from either of my lower orifices.

Ruler still in my left hand and liver in my right, I poked under the dresser and Mancat again made for the door, where he, so sadly, began to try and crawl through the half inch gap separating door from floor. I saw real terror in his eyes, and I’m sure he saw hate in mine.

I grabbed a blanket and dove at the door.

Cats, I’ve now found, can make soul chilling sounds when cornered. A cornered cat’s wail has the powerful intonations of a child being flayed alive counterpointed by a madness that must sound something like the inner voice of a serial killer when he’s been six-years-bound in a straight jacket and tossed in a rubber room. The writhing life in my hands was utterly terrified, crazed with fear and angry as Hell-on-Crank. I started my run through the house to the front door.

On my way down the stairs Mancat wriggled his snarling head, now just eyes and teeth, free from the blanket. He bit into the flesh of my left hand like a viper just as I opened the door and tossed him into the street.

It hurt like a bastard, but my only thought was, “Bye-bye fucker! I win!”

The wound didn’t look that bad, and with the help of my downstairs neighbor I cleaned it a bit and headed out for a few beers with friends.

Within 5 hours my hand had transformed into Charlie Brown’s baseball mitt. By morning it was a weeping wound surrounded by fierce red flesh. As The Surly Girlfriend left the apartment she said, “I know you’re not going to listen to me, but you really should see a doctor about that today.”