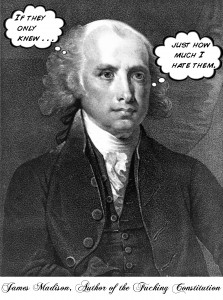 In Washington, DC there is never a shortage of ambulatory, self-deluded stupid factories waving copies of the Constitution and blathering about the founding fathers’ vision of a limited government. This week the place is positively lousy with them. They gather around cameras and shout that “the people” sent them there to get rid of that damned Kenyan socialist, palling-around-with-terrorists, radical Muslim, black-liberation-Mau-Mau anti-colonialist usurper-in-chief and his tyrannical ObamaCare! Given half a chance, they’ll tell you that’s what Ben Franklin and Thomas Paine would be doing if they were to materialize from the ethereal world right here and right now, you betcha!

But, and this should be obvious without too much thought, putting on a fucking tricorne hat does not imbue a fucking imbecile with a degree in Constitutional fucking history. If that’s the way you think learnin’ stuff works, dress up like the Scarecrow from the Wizard of Oz, write DIPLOMA on one side of a piece of typing paper and go amuse the townsfolk by reciting the Pythagorean Theorem. Halloween is right around the corner! Just get out of my way.

In truth, it’s hard to know what any of those 18th Century land owners would think about 21st Century America, though we can be pretty sure their slaves would much prefer our modern incarnation with its strong central government, 14th Amendment, Voting Rights Act and prohibitions against whipping the flesh off their backs because someone up to the big house had a bad day. But it is undeniably true that James Madison, the guy who ACTUALLY WROTE the Constitution would look at these Tea Party clowns currently engaged in political extortion and want them rounded up and dumped into the fucking Potomac.

We know this because he wrote about the dangers of faction, specifically, in Federalist 10. In that essay, often credited as the lynchpin argument in the ratification of the Constitution, he opined: “By a faction, I understand a number of citizens, whether amounting to a majority or a minority of the whole, who are united and actuated by some common impulse of passion, or of interest, adversed to the rights of other citizens, or to the permanent and aggregate interests of the community.”

I mean, I might, in my Surlier moments define them differently (por ejemplo: The Tea Party is a daisy-chained, informational human centipede of poorly learned history masquerading as a rational political ideology), but James Madison, our fourth President, kinda knocks it out of the park with his description.

The Tea Party in Reality (not the one that they imagine themselves a part of, complete with fifes, drums, flag-festooned parades and LOTS of white people with guns) is “a faction” in the Madisonian sense, not because I disagree with them, but because they are acting against the “permanent and aggregate interests of the community” to promote their own short-sighted, narrow self-interest. They are doing so by designing an entirely new and dangerous political power — the power to veto settled law — and they are trying to give that power to one wing of one party of one house of one branch of government.

It is not hyperbole to say that if they are successful, they could make the United States ungovernable. Forever.

If they are successful, then every single time there is a budget, a continuing resolution to fund the government, or a debt ceiling vote, a sufficiently powerful faction within a political party could demand any ransom they desired to allow the nation to function. This time it’s ObamaCare. Next time it could be a zeroing out of the federal minimum wage. Or a privatization of Social Security. Or an ending of Medicaid. Or, if you wanna play this out in reverse, with a wackadoodle progressive caucus, it could be a defunding of the Air Force because fighter jets have carbon footprints so large that they squash all the remaining polar bears.

For anyone engaged in this conversations, it is impossible to not see this. That there is any discussion in the media about any other aspect of this debate is brain crippling. If the Tea Party wins this showdown, then the Father of the Constitution’s most grave fear will have been forced upon us by angry, ignorant fools who mistake playing dress-up for actual governance.

So, the next time you hear one of these silly people talking about their Founding Father Fetish, do the Surly Bartender a favor by reminding them that they aren’t patriots, they are, as Madison might have called them, a bunch of fucking thatch-gallows.

But for now it’s time to head down Ye Olde Publius for a gallon or six of ale.