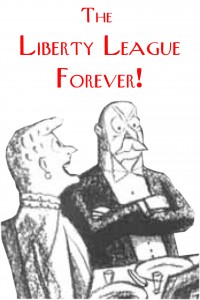 Tell you what: I’ll buy the next round if you shut the fuck up for five minutes. No offense, you’re completely entitled to your retarded opinion. It’s just, if I hear one more goddamn patriotic Real American bray about the real meaning of “liberty,” my reaction is to start affixing wicks to booze bottles. You know, just out of self-defense.

Angry, stupid, übernationalist white people have been grumbling the same fucking thing ever since somebody made the mistake of enfranchising people you didn’t think deserved it, who then proceeded to commit the crime of voting for shit you disagreed with. And every time they do, scary shit tends to happen.

Hell, in the early 1930s, an upstanding Wall Street executive named Gerald MacGuire went to Europe explicitly to study angry, stupid, übernationalist white people, primarily World War I veterans pissed because they had been sent into the bloodiest meat-grinder in human history because some inbred aristocrats wanted to make sure other inbred aristocrats didn’t rape more of Africa and Asia than they did. This, of course, is a perfectly respectable reason to be angry, but that’s not the point. The issue is not the validity of your anger — it is the persistent and apparently generational stupidity you employ in directing it.

MacGuire conducted his research on the Croix de Feu and Italy’s Blackshirts on behalf of some of the most influential men in the U.S., the veritable captains of industry.  Their plan was to employ MacGuire’s findings in a plan to build an army of American military veterans to oust Franklin Delano Roosevelt from the presidency, nip FDR’s New Deal in the bud and thereby enact a heroic Restoration of the U.S. Constitution. So when conservative online enclave Newsmax not long ago wishfully envisioned a coup d’etat against Obama, or when a flurry of Real Americans for a year loudly suggest weaponry might be a solution to the results of an election, you might see where these aren’t really new ideas, nor have their proponents been recorded as historic champions of liberty.

One immediate problem occurs: that we seem to be operating on two different definitions of “liberty.” As used by the Tea Party “movement” in the U.S., or the coup plotters in the U.S. in 1934, “liberty” is like the American flag; its zealous defenders have become so entranced with the thing as an icon, they no longer remotely suss the meaning behind it. For them, for you, Mr. Proud Tea Partier, “liberty” doesn’t refer to due blessings bestowed upon humanity by the social contract of a democratic republic. It is about how those blessings get divvied up and who, by their measure, is owed more.

In the U.S. in recent months, much of white übernationalist anger has been in defense of the liberties of rapacious, Malthusian health insurance and banking companies, whom Obama and the Congress have been attempting all too timidly to rein in. That’s the conversation we’re having over here in Reality. Through a right-wing filter, however, problem-solving seems to translate as “forwarding a Hell-programmed heresy writing the preface to Armageddon.”

The real crux behind this apparent epoch-making, life-or-death struggle is that, of course, it has been engineered wholesale. You did not join spontaneously in a great crusade of Restoration. You, like that great unformed army that might’ve slain FDR, have been recruited by American corporations who do bad things and want to go on doing them unchecked by society. They need you to make it look like their doing bad things has broad support, or any, as what exists of it isn’t broad. You are the loud, annoying evidence of the kind of bad things they are willing to do to keep doing bad things.

That’s all you’ve ever been.

Gerald MacGuire worked for Grayson Murphy, owner of a brokerage house and director of one of the banks owned by superfinancier J.P. Morgan, the most powerful man in American business. In the summer of 1934 MacGuire, also an officer in the American Legion, solicited two-time Congressional Medal of Honor winner and retired Marine General Smedley Butler to lead an army of 500,000 Legionnaires to Washington, where they would wrest the government from Roosevelt, murder him, or reduce him to figurehead status.

It seemed a tall tale even to Butler. Fortunately, the general knew the American Legion’s imprimatur, that it had initially been financed by American capitalists, including Murphy and Morgan, to re-purpose U.S. military vets as strikebreakers and had long aped its bankrollers’ reactionary politics. In 1923, Legion commander Alvin Owsley publicly drew parallels with Italy’s nascent Blackshirt government. “The American Legion is fighting every element that threatens our democratic government — soviets, anarchists, I.W.W., revolutionary socialists and every other Red,” he told an interviewer. “Do not forget that the Fascisti are to Italy what the American Legion is to the United States.”