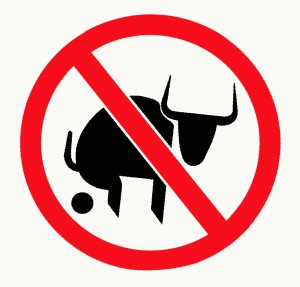 Now, I wanted the idiot to turn off his cellphone, too. So I again, held my tongue, but I ask you, gentle readers, to wonder for a few moments, about the situation and the veracity of the directive.

The folks at the Department of Fatherland Security have written extensive regulations, down to the OUNCE of how much hemorrhoid cream you can carry on a plane. They are afraid to allow you to bring bottled water on board for fear that a mullah made praise to Allah above it during distillation. Fingernail clippers with the pointy file thing are confiscated. But they have decided to allow EVERY JAGGOFF AND HIS BROTHER to board a DC-10 with the ability to push a few buttons on his cell phone and impair the plane’s ability to communicate with air traffic control or other jets in the area.

If you could, in any way, interfere with a plane’s communications via your cell phone, don’t you think they’d have you lock it in your check-in luggage along with your booze, your razors and your vibrator? Now, I don’t know why it’s an official regulation – maybe someone higher up the chain of rule making decided that they hate guys with Blue Tooth devices in their ears as much as I do, but it sure as hell doesn’t have a thing to do with airline security. Bullshit. Complete and Utter. And Bullshit unacknowledged is bullshit unchecked. We have a duty to call it by its name.

The same, by the way, goes for the vigor with which, in the post 2001 security environment, they enforce the “poor people piss in the back” rule on the planes. Look, we all get the “no big group of guys gathered near the cockpit” regulation, but a few years ago my full bladder could trump your first class sense of privilege, now if I try to take a leak up front (where the ratio is 1 pisser to 5 passengers, as opposed to the 1 per 50 in steerage) I get hounded back into my compartment as if I were wanted to release jihad from my bladder rather than gin. Again: Bullshit!!!

But off the planes and on to politics:

First, one of my favorite piñatas of last year, Sarah Palin, has recently been a firehose of self-deceiving bullshit. For one thing, I just heard on the news that she’ll soon be going on her first book tour. I’m hoping someone informed her that book tours are generally reserved for people who have successfully written books. One can never be sure with her.

Second, as the world now knows, Sarah Barracuda just quit her job as Governor of Alaska – and, for the record, I’m happy she did. She’s an ideologically driving idiot and I have a ton of friends up North from my days traveling around the state from the Wrangells to Wasilla. But I just can’t let this go. Sarah, you can’t quit your job and then hold a press conference claiming that you’re not a quitter.

Sweetcheeks, you quit! In the middle of your first term. I could understand that the pressure may have been too much for your delicate soul… if you were the governor of California or New York, but for fuck’s sake, Alaska is an oil sheikdom of 600,000 people. Down in the Lower 48 there are sub-divisions with more citizens and organic grocery store managers with greater responsibilities.

Politically speaking, the only thing you had going for you was your gumption, your toughs, your ability to take on whatever the world threw at you, from Grizzly Bears to Hockey Pucks – but, well, looks like that’s complete bullshit. You couldn’t even face down David Letterman. You are a Barbie Doll formed from chocolate soft-serve bovine stool. And you quit. Go away now.

Next: Republican Party, look over here, I’m talking to you. I want you to fail, so don’t really listen to me if you want to succeed, but you are bullshitting yourselves if you think FOX News and Right Wing Radio are your friends. Here the basic math – and despite the recent yamma-jammaing at town hall meetings by the wingnut set – its long term trends ain’t changing. You need to garner around 50 percent of the votes in the United States to be relevant in the coming century. Currently you share about, at your base, the 25 percent of mouthbreathing, Mexican-fearing, health care hating mongoloids who tune into FOX and the AM radio fools around the clock. The bad news for you is that that specific 25 percent isn’t growing, no matter how frantically they rut in their megachurch pews and trailer parks.