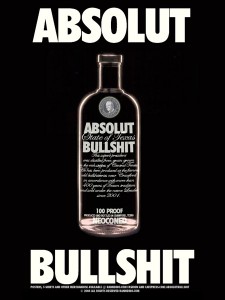 That sucks for you, Republican Party, as you will become increasingly irrelevant in American history, like your forefathers, the Whigs and the Know Nothings, before. But it won’t suck for FOX, because all they need to keep minting ba’jillions of dollars is a strong market share (say, 25 percent of total viewers) NOT a majority, so they can keep pouring crazy fuel on the loony fire all day long. They are the beast that is eating your babies. Ever think, maybe, you should say something about it before the whole neo-con nursery is devoured?

Again, I think it’s WAY better for the United States and the world if you dry up and blow away, but – if you want to stay in the game, lose the fealty to Rush, Sean and Bill O’Reilly. Otherwise, you’re as useful as a steaming pile of bullshit on shoulder of the highway to Bullshitville – even if you hire a whole minstrel show to Stepin Fetchit for your National Committee.

There’s a heaping helping of bullshit on the International stage these days as well. Let’s start locally.

With little knowledge of, and little camaraderie with, any demagogue (particularly one with such foolish affectations as the President-in-Exile of Honduras, Manuel Zelaya – really, a 10 Gallon hat with a Joe Stalin mustache?) but anyone who believes in the honest natures of the assholes who booted him from power eats bullshit burritos for breakfast. First, the Honduran elite are notorious, even in Latin America for their decadence and disrespect for the rule of law and the poor of their country. They are none to affectionately known as Los Esqualidos (The Squalid Ones) and the coup’s foreign minister, Enrique Ortez Colindres recently called President Obama “un negrito,” a “little black man” who “has no idea where Tegucigalpa is.”

And the world knows the coup is bullshit. As Al Giordano of Narco News recently noted, “it takes a particular kind of moron” to unite Hugo Chavez and the government of the United States in opposition to anything. Otherwise said, “Coup leaders! You’re bullshit.”

And, hey you, Ahmadinejad, you’re just lucky the Surly Bartender ran out of space. I’ll get you next time.

God, that felt good! I think it’s time for a drink!