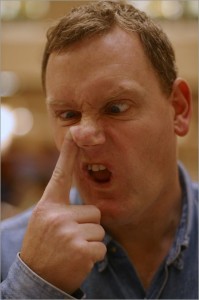 Then there’s the role played by the  media, itself – and here the Surly Lash will be taken to all cable news outlets, not just Fox, though they are, unsurprisingly, by far the greatest offenders. Marshall McCluhan famously observed that in this modern world, the medium IS the message, and the news networks are currently so wedded to presenting a sense of “balance” in their coverage, that they will gladly toss truth and empirical evidence over the cliff to fit their format. This makes them unusually unhelpful in a debate about politicized science.

Not to track too far into another debate, but when Sarah Palin can tweet a turd into the world by claiming that “Obamacare means Deathpanels,” and ALL the major media spend three weeks debating the salience of the statement WITH PRO AND CON POSITIONS ABOUT WHETHER THE PRESIDENT WANTS TO KILL YOUR GRANDMOTHER, then we can safely say they simply have given up doing their job in favor of their format.

And since we’ve drifted into the land of the teabaggers, it is time to take note of the numbers. Back in 2007, 18 percent of Americans doubted the reality of global climate change. There’s likely one hell of a correlation between those folks and the roughly 27 percent of Americans who never lost faith in George Bush, who doubt evolution and believe that 6000 years ago Adam and Eve rode pet velociraptors around the Garden of Eden for innocent, non-sexual, fun. Idiots.

The basic formula of cable news is to have a poorly informed moderator  sit in between two opposing “experts” for a seven minute exchange of ideas. In the case of climate change, on the one side is a single representative of the scientific consensus, who tries valiantly to distill decades of research into 15 second sound bites. On the other side is a guy who has a much easier challenge – to argue to the audience that he can prove, simply by virtue of his disagreement, that there IS no consensus. The viewer, with painfully little understanding of the science, comes away with the thought that, “Well, there certainly seems to be disagreement!” That is foolishness taken to the Nth degree. Expect it to become an integral part of 2010 as Washington debates ways to reduce carbon emissions.

Just for fun, the Surly Bartender would like to stick a pin in one of the worst bubble-heads making media circles these days. I expect you’ll be seeing a lot of him this summer, and forewarned is forearmed.

His name is Arthur Robinson and he has a very concise argument – thus earning him his spot on countless newscasts over the years (not to mention the quarter of a million hits you get when you type his name and “climate change” into Google.)

Robinson is the “brains” behind a petition signed by 31,000 American scientists who dispute the reality of global climate change. Now, one would have to admit that if 31,000 climatologists disagreed with the basic tenets of global climate change, it might be time to reconsider the consensus. Particularly as the American Geophysical Union estimates that there are only 20,000 climatologists in the country. Robinson’s whole argument is his petition, but his numbers mean nothing.

While Robinson claims that only “scientists” are allowed to sign his petition, he’s less likely to highlight the criteria for inclusion amongst those august ranks. To become a signatory to the petition, one needs to hold a “bachelor’s degree in science or its equivalent.” And, imagine, over 12,000 of them are just that, Americans who spent their undergraduate years playing beer pong and studying biology – but then went no further in their studies. Put another way, one third of Robinson’s list is made up of people who are not qualified to teach 9th grade Earth Science. That point never seems to make it to the news.

Robinson’s list also includes 2,586 doctors, which seems impressive, until you read a bit further and discover that those who have achieved degrees in dentistry or veterinary medicine also qualify. “Hey, Sal, I was wondering about this global warming stuff, so I called that guy who clipped off Spike’s balls last week. He says it’s total bullshit! So that settles that!”

Still, that leaves about 16,000 signatories who either have a master’s degree or a Ph.D. That’s a pretty impressive number, until you consider just how many potential signatories there are. By calculations, drawn from the 2000 U.S. Census, there are approximately 58.6 million Americans who could have signed Dr. Robinson’s petition. Which means, if you do that math, that fully .06% of American scientists cared enough to affix their signatures to this fool’s work, which, if we want to play as fast and loose with statistics as does Dr. Robinson, means that 99.94% of American scientists believe that global climate change does, in fact, exist. Pure as Ivory Soap.

Clearly there are other voices out there claiming dissent, and bursting one bubble doesn’t dispel the totality of propaganda, but it is a reasonable case in point and is instructive for understanding the larger battle. In the end, you’ve got a choice. You know shit about the science, so you can either listen to the guys who’ve spent their lives studying the matter, or the guys who stuff soap up their noses.

The Surly Bartender - Worse Than Nixon?

Not on your damn life.
By Michael Tallon
Monday, December 22nd, 2014