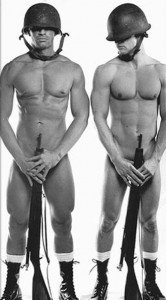 But all that is by means of introduction. The First Amendment to the Constitution allows for idiots to think whatever the hell they want, and generally to spout their idiocy across the airwaves. We can’t, and shouldn’t, try to make such foolishness illegal, but there are times when our legal structure can, in fact, promote a just society by affording legal rights to groups of people that others revile. The nation went through this back in the ’60s and ’70s during a civil rights movement which provided legal protections for all Americans, regardless of race. And we have the opportunity to do so, again.

Writ short, it’s time for a full court press on legal rights for members of the gay, lesbian, bisexual and transgendered communities. It’s high time that we progress beyond that bigotry. And here’s a logical place to start: gays and lesbians should be allowed to serve openly in the military. And one of the first ways we can manifest this change is by clear-cutting the forest of soothing bullshit that the bigots use to hide their bigotry.

Under current law, gays and lesbians can serve in the military, so long as they don’t talk about it or get caught in an “immoral act.” The policy, drafted as a compromise under the Clinton Administration, is called Don’t Ask / Don’t Tell. Basically, it means that you can do whatever the hell you want privately, so long as you don’t out yourself (Don’t Tell) or get caught by your fellow soldiers or superiors “being gay,” (Don’t Ask.)

Though, over the past 18 years this law has led to the discharge of over 12,500 soldiers, airmen and marines, according to the Service Members Legal Defense Network, and cost an estimated 400 million dollars in lost training costs, this was, likely, the best compromise that could have been reached almost two decades ago when there were far more anti-gay bigots in America and its military than there are today. (Remember, one of the advantages progressives have in this debate is that old bigots die at, hopefully, a faster rate than they are formed by conservatives rutting in their trailer parks or gated communities.) But in the second decade of the twenty-first century, the country has changed, and it’s time to call out the remaining bigots and ram this change down their throats. And we shouldn’t feel bad about it. They’re bigots! It took forceful action to bring about equal rights for members of all races, and The Surly Bartender, for one, doesn’t feel at all bad that Bull Connor is recalled in history as a racist dick rather than an upstanding lawman. White Pride and Fear of the Gay are equally asinine, and will, hopefully one day soon, be seen as such.

Now, these gender-preference bigots have learned how to lie, maybe even to themselves, about their motivations. They speak of dangers that allowing openly gay and lesbian citizens to serve would cause to “unit cohesion and morale,” and they claim that “now is not the time to play social policy while our military is in the field.”

Sorry, guys. Nice try, but at the end of the day, you either just don’t like fags, or you think they are somehow different from other citizens, somehow “worse.”

Now, if you, The Surly Barfly, find yourself in an argument on the subject with a dissembling bigot, here’s a primer on how you can counter their arguments:

The Surly Bartender suggests taking the last issue, first. Note that the United States has had “men and women in the field” militarily for the past 112 years. There has not been one day in the history of the empire, since the Spanish American war in 1898 to the present, when American soldiers weren’t fighting, somewhere. Moreover, in that time, America has fought 12 major wars. Rather cheekily, I’m including Grenada, Panama and Serbia, and for those of you counting, the one you’re forgetting is the Philippines Insurrection. Quarter Million Dead! That’s a big boys’ war, if ever there was, even if it doesn’t rate pages in most high school history books. I’m including them, as they surely would have been used as a defense by the bigots at the time.

One major war per decade is a pretty impressive hurdle-rate for any nation, and it’s not likely to change in the near future. So, when exactly should we address this issue? “Not now” is not an answer, as American foreign policy isn’t likely to be altered substantially in the coming decades. This argument is just an attempt to kick the can down the infinite road of perpetual war.

Now you’ve probably pissed off your sparring partner, so take the offensive. Before they get their bearings, address the notion of “unit cohesion” in the trenches. Note first that the greatest warrior nation of early history, Sparta, encouraged homosexuality in the military as a way to encourage unit cohesion! Specifically, they believed that a man would fight even harder if his lover were under threat of the blade. Makes sense to the Surly Bartender! Moreover, if any nation that allows gays and dykes in the military had noticed that it undermines the fighting force, they would have changed the policy back to one of exclusion! No nation, not even France (though, admittedly, this is sometimes hard to believe) fights wars to lose them. And for the record, there are twice as many nations that allow gays and lesbians who are open about their lives to serve in the military than there are nations that ban the practice. For an added rub into the bigot’s eye, note that the list of nations that do so allow gays and lesbians to serve includes Australia, the United Kingdom, Ireland, Israel and Germany. Those who ban it include Syria, Iran, Saudi Arabia, and the newest pariah state, Yemen. Which club you wanna belong to, Bubba?