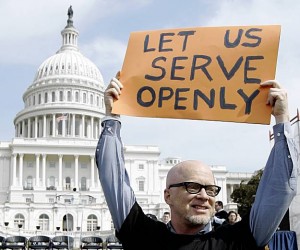 Third, take on the point about “morale.” For sure, this is a decidedly important aspect of military service, but fear of change is likely far more daunting than change itself. More than sixty years ago, President Harry S. Truman desegregated the United States Military. At that time Jim Crow was in full effect across the American South and Northern segregation was oftentimes as bad. The sheer number of racists in America then, and by extension in the military, far outnumber the homophobes in America today, and yet, as a nation, the United States thrived.

One could even make a strong case that without military integration in the 40s and 50s there would not have been as successful a Civil Rights Movement in the 60s. Millions of soldiers learned, first hand, that racial differences meant shit when it came to life and death missions. Likely the same would be true today for sexual orientation. And, after all, this is the military we’re talking about. As was done in the past, you order the change. If you’ve got to choose between losing a bigot or a GLBT soldier who shares no such bigotry, punt the homophobe. THAT’S the American Way!

Presumably, at this point, the canard about race and gender preference being different animals will arise. “Hey, I didn’t choose to be Black, but that dude did choose to be gay.” Have fun with this one. Ask your friend when he chose to be straight! Was it before or after his first wet dream about another boy?

Then duck, ‘cause most gender choice bigots have a real sore spot for having anybody question their sexual orientation, which seems odd if they were born that way and it’s the other guys and gals who chose the icky.

And this gets to the central point. All the blather about morale and unit cohesion and timing are bullshit. Do you doubt that there are homophobes in America, and more than just the crazy ones who attend service members’ funerals carrying signs that read, “God Hates Fags” and believe that the Lord is punishing America for allowing their scourge to exist? Just like there are O’Reilly Racists, there are Hannity Homophobes, those smart enough to choose their words carefully enough as not to get called out on television.

Reality check: some people, mostly religious conservatives (and older or dumber folk) with their supposedly higher sense of morality, just don’t like fags – and they shouldn’t be allowed to get away with it because of some misguided sense of propriety. They are bigots and they should be hounded; and while doing so, it should be noted that the progenitors of these monkeys used the same Books of the Bible (or the Koran, for that matter) to justify slavery, Jim Crow and apartheid not so very long ago.

These folks believe, at their homophobic roots, that gays and lesbians behave in ways far too immoral for this world. Which if you think about it in the context of military service is kinda funny. If they are right, then their God thinks that it is morally WORSE for a man to kiss another man in the throes of passionate love, than it is for him to drop napalm on another human being in the name of a transient nation state. If so, then that God is a Dick and The Surly Theologian will have no truck with either Him or Her.

It’s understood that calling out individuals as bigots is unwelcomed by a society that would rather paper over its bigotries than confront them directly, but the reality remains. Many respected people in American are straight-up homophobes who have learned how to lie about it, same as with many of the remaining racists in the nation, and the longer we let them get away with it, the longer the nation will remain imperfect and unjust.

Just as addressing the issues of racism in America during the Civil Rights Movement took White racists to look in the mirror and either evolve or die off, resolving the problems caused by bigotry against gays and lesbians will take the same strength from straight America. And those of us who are Surly Allies in the cause should stop putting up with the bullshit and call a spade a spade. Just because someone can get away with a lie, or hide in the weeds with the belief that people will be too scared to call them out on it, doesn’t erase culpability – nor yours if you remain silent.

Chances are, after your argument, the homophobe will stick to their guns, and the racist will continue barking that the noose in their pocket is really just a necktie, but since you’ve engaged you’ve made a difference. And enjoy the last laugh. On your way out of the bar that night, remind them that they do have intellectual allies on the ground in Afghanistan.