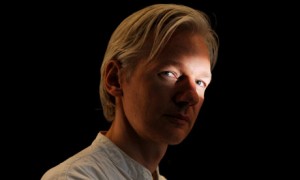 The Surly Bartender is used to confronting complex issues, slicing away the extraneous bullshit and drilling into the moral, martial or material core in the amount of time it takes most mortals to drink a martini. Yet, I have to admit to being truly puzzled today. And to be so puzzled at a time when most of those around me have already staked out their positions and reinforced their redoubts is a unique and uncomfortable place to be, but I can’t get away from believing that ambivalence is advisable at the moment.

As the interconnected parts of the world now know, a few weeks ago Julian Assange and his website, WikiLeaks.org, released the first tranche of  250,000 classified, confidential or secret cables that passed between United States Embassies and the State Department in Washington during the years since 1966. This “document dump” has provoked powerful reactions both from the organs of global power and defenders of free speech. There is the usual rogues’ gallery of entrenched elites or sycophantic wannabes calling for, quite literally, the assassination of Julian Assange and the execution of Bradley Manning, the indicted but untried Army Private suspected of culling and delivering the documents to WikiLeaks in the first place. There has been support for Assange and Manning, as well, notably by a group calling itself Anonymous. Much of the debate has focused on  the rights of the state versus the rights of the individual, but very little of it has considered the new context that surrounds all issues of security and free speech in the age of global connectivity. In my own  endearing and Surly way, I’m going to try to do that here.

But to start with: Manning, Assange, and the facts of the case –

Bradley Manning, some eight months ago, was a Private First Class in the United States Army, stationed in Baghdad. He was awaiting discharge for something the army termed an “adjustment disorder.” To read about Manning is to feel for a confused kid who thought the Army was a good choice for putting his life together, but discovered he didn’t like being treated like a cog in a larger machine, and he came to hate what that machine was built to do — kill people. I have a feeling that if I ever got a chance to meet the kid, I’d like him.

But that is unlikely, as he is being held in solitary confinement (23 hours in his cell, 1 hour in an outdoor cage everyday) in the Military Brig at Quantico, Virginia in conditions that many consider torturous.

He faces charges for transferring classified material to his personal computer and communicating national defense information to an unauthorized source: WikiLeaks. The information he allegedly passed include two videos of military engagements in Iraq and Afghanistan, both of which show United States armed forces acting in galling disregard to innocent lives. Further, it is believed that he is the source of the diplomatic cables. He is facing 52 years in prison.

Interestingly, the story did not seem to boil over with the release of the videos, which were also aired through WikiLeaks, and the Surly Bartender has respect for Manning and Assange for bringing that information to light, but it’s with the diplomatic cables that the story becomes far more gray.

Thus far, no nation has arrested Assange for his publishing of classified information, and we can only hope that none does, as such a decision would set a grotesque precedent for any country that aspires toward freedom of the press. Assange has not committed a crime substantively different than the ones that The New York Times, Der Spiegel, or Random House commits daily when they publish classified information gathered from their reporters and authors. Writ short, while maintaining any semblance of a government by law, you can’t arrest Assange without also arresting Bob Woodward. News IS the release of classified information.

But Assange, like other national security whistleblowers before him who didn’t follow the established rules of the journalistic game, has found himself accused of other crimes — embarrassing ones of a sexual nature. I’ll give the charges no more coverage here, other than to note that both Daniel Ellsberg of Pentagon Papers fame, and Scott Ritter, former UNSCOM chief weapons inspector in Iraq, were both similarly accused in their time. The charges could well have arisen against Assange naturally, and if so the guy should face punishment, but my gut says that I’ve seen this movie before and there are machinations behind the scene. You can follow that drama online, if you are so inclined.

Yet, while governments are being cautious, legally, with Assange, there clearly have been other actions taken by governmental, military and business elites to limit the fallout from the document dump. Quite clearly, pressure has been put on private companies that provide the electronic support systems for WikiLeaks. Most notably, PayPal suspended processing of any payments to WikiLeaks, and Twitter suspended Assange’s account supposedly for violations of terms of use. Also, WikiLeaks.org, despite having over 20 mirror sites globally, has been difficult to access in recent weeks. My Surly Bullshit Barometer says that none of this is by accident. And, who knows? Maybe someday, someone will leak the records of the phone calls from Langley, Virginia to PayPal’s corporate headquarters. Until then we’ll just have to assume the worst.

The WikiLeaks case has encouraged strident defense, as well. Notably, documentary filmmaker Michael Moore has pledged $20,000 to a legal defense fund for Assange as well as the hosting services of his own website. Many progressive columnists have condemned the persecution of Assange as a desire to “kill the messenger.” Ron Paul, the Libertarian / Republican congressman from Texas has publicly and properly asked from the floor of the House of Representatives, “Which has resulted in the greatest number of deaths: lying us into war or Wikileaks revelations or the release of the Pentagon Papers?” The unofficial dean of dissent in the United States, Noam Chomsky, has said that the documents reveal “a profound hatred of Democracy” by his national government and he has praised Assange and his battle for a more open society. All of this is predictable, and to my Surly Mind, largely justifiable, but for an open society to continue to function, both transparency AND some notion of a rule of law are required — and the very technological changes that allow WikiLeaks to champion transparency also provide the opportunity to cripple the concept of living by a rule of law. Thus, my dis-ease in this Brave New World. It’s not so much Julian Assange as it is those who may follow.