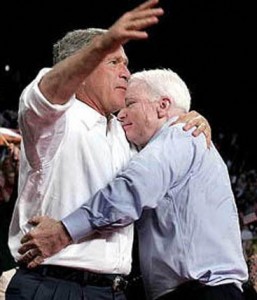 But the term that makes the Surly Bartender’s head come closest to Red Dawn meltdown is “maverick” as used to describe John McCain, the candidate most qualified for the 2008 political glue factory. This term has become a remarkably successful meme – a virally transmitted idea – that has taken hold of the public mind and resists the forces of reality to correct the mistake. Type McCain’s name and maverick into Google and it nets over 2,340,000 distinct hits. As a general rule, if anything is repeated that often, it’s probably bullshit. Type “Obama” and “Muslim” into Google and you get over 8 million hits.

Here’s a little history: The term Maverick comes from a 19th Century Texan rancher named Samuel Augustus Maverick who was too lazy to brand his calves, causing massive confusion and theft in the cattle market a little over one hundred years ago. Over time it has somehow morphed into meaning, ironically, one who carries his own brand rather than one who has none at all. Originally a maverick was a dull beast ready to be subsumed into any herd of convenience. Seen in that light it describes the John McCain of 2008 quite well. But to understand maverick’s more common misapplication to the Senior Moment Senator from Arizona we might better remember another word, first entered into the public record by Samuel Augustus’ grandson, US Congressmen Maury Maverick in 1944 – gobbledygook.

One can understand the Republican strategy of running from their own brand in 2008, as the past decade of advertising and product placement has left them the political equivalent of a penny loafer / cardigan ensemble in a mosh pit. You know the litany, but as the good citizens of the United States, the Surly Bartender included, are being asked to chart a course for the coming decades, it bears repeating.

The Republicans of George Bush (and John McCain – who has voted with the administration 95 mavericky percent of the maverickal time) have landed us deep in the middle of two very trying wars, and if the Congressional leadership ever grows a pair – balls or ovaries, I care not which – we’ll soon uncover evidence that we were explicitly, intentionally and illegally lied into one of them. We’re hemorrhaging over ten billion dollars a month to fund just one of those wars while the Iraqi Government (and the oil companies) sit on a surplus of 80 billion dollars in profits that are NOT going to that nation’s rebuilding. That’s messed up.

We were promised we’d be greeted as liberators in the streets of Baghdad. What we got was a fist full of shit, 4000 dead Americans while our own karmic debt is closing in on half a million innocent Iraqi lives.

We were promised that the war would limit, rather then metastasize, terrorism. What we got was a resurgent Al Q’aeda and John McCain promising to follow Osama bin Laden to the gates of hell – presumably stopping to have his cavities checked, his luggage searched, and his visa renewed if the river Styx happens to flow across the Pakistani border.

We were promised that deregulation of energy and finance would lead to lower prices and an ownership society, bringing us to the promised land of a grand new American Century. What we got were soaring energy prices (Remember The Enron!), the fabulous excesses of corporate pashas (Remember The WorldComs!) and millions of Americans facing foreclosure because they believed the force-fed fairy tale of an all-knowing market that would benefit honest, hard working citizens, rather than the corrupt and well connected.

We were promised, by McCain himself, that he would vote, always, against the use of torture. What we got was Maverick McCain (a man who started working with his North Vietnamese captors after only four days) turning tail and embracing a bill that allows torture so long as it carries an American brand.

We were promised that this campaign would remain honorable and above board. What we got was Obama being painted as “the other” because he was born in the far away and mythical land of Ha-wa-ii. What we got was a campaign that implies Obama “puts himself before his country,” and a promise that Maverick McCain would never do that – though, if someone wanted to throw incredibly loaded words around like bombs, collaborator might be an apt one to roll under Senator McCain’s tent-flap. He, after all, did cooperate with the enemy. He did give up attack vectors and target locations that led to a redeployment of North Vietnamese defensive fortifications and, in part, to a 60% increase in the number of American pilots knocked down in the year following his capture. And, if you follow the logic that “enhanced interrogation techniques” aren’t torture – but they do produce valuable intelligence, then, like it or not, he did collaborate with the enemy.

Actually, I don’t believe that for a second.

I think John McCain was tortured, horribly and immorally, and that he can’t be faulted for a pennyweight of those sins. But, apparently Maverick McCain no longer believes that “enhanced interrogation techniques” are that bad, so I’ll defer to his wisdom in this regard.

In the end, we were sold a bill of goods by Republicans over the past 8 years. It’s the same silliness they’ve been shilling since Reagan won the White House 28 years ago. Now we’re being asked to buy it again, relabeled as Maverick McCain’s Snake Oil.