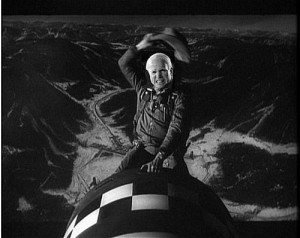 Some months ago we quoted Pat Buchanan in this magazine, who said John McCain’s foreign policy would, “make Cheney look like Gandhi.” That is a frightening simile. Four more years of Republican stewardship of the nation would be disastrous for the entire planet, not just politically, but also environmentally. No matter how much Exxon John wants to pretend, America is surrounded by rising oceans and is breathing polluted air, just like everyone else.

The nation and the world have seen enough misplaced belligerences from Washington in the past decade, and John McCain, following in the neo-conservative tradition, is a hawk of the worst sort. His aggression is palpable and sobering while his knowledge of geography and history are passing and suspect. These might be qualities the Surly Bartender could tolerate in his bouncer but not in his President. If you’re going to claim (without merit, I’ll add) that you “know how to win wars” you’ve at least got to be able to locate the countries you wish to destroy along the time / space continuum.

If the Anderson Coopers of the world weren’t so worried about maintaining their contacts and their paychecks, McCain might have gotten away with a mention of our “ally Czechoslovakia” once, but not four times. He might have been forgiven for suggesting that Al Q’aeda in Iraq was being trained in Iran once, but not five times – three of them after he’d been corrected publicly by his Droopy Dog sidekick, Joe (Please-Go-Suck-A-Tailpipe) Lieberman. If we had a real fourth estate, McCain might have been forgiven the geographical error of referencing “the Iraq / Pakistan border” were he the wacky news item at the end of the broadcast – like the guy who collects coat hangers, or the woman who eats nothing but lard – but he’s running for president.

All these massive screw-ups, taken as a whole, should give anyone (from a running dog liberal to a chickenhawk neo-con) pause to consider whether this guy should be anywhere near a button connected to anything more potent than a morphine drip. And, again, here I am not playing the Age Card. I am stating loudly that, in my opinion, John McCain – not all septuagenarians, surely, but John McCain – is going a bit soft in the head. That’s fine for the drunk at the end of the bar, but not for a man who wants to assume the greatest seat of power the world has ever known. We need someone who is FULLY in control of their faculties – “a little soft in the head” is just not okay. McCain, while he has served his country nobly over his career, is no longer a maverick; he’s becoming an ever more cantankerous, cranky and forgetful old dog who barks a discredited tune.

Senility is real. It exists. It does effect memory and reason. Why should it be impolitic to mention? In the United States, 22 percent of individuals over 70 years of age exhibit mild cognitive impairment and 13 percent of those over 65 are suffering from Alzheimer’s. Ronald Reagan was diagnosed at age 83, though he evinced signs early in his first term. Maggie Thatcher developed dementia at 75. Isn’t it worth broaching the subject as John McCain seems to have some holes in his memory and has a long history of acting with bouts of extreme irritation and anger?

These qualities have been on display most recently regarding the tragic events in the Republic of Georgia, which, despite the shallow treatment it’s getting in the major media, is far more complicated that the a resurgent Russia picking on the plucky little democratic regime of Mikheil Saakashvili. In this “moment of crisis” McCain has previewed his lack of emotional control as well as a staggering insensitivity to great power politics. Not only did he send off envoys to monitor events on the ground, even before the Bush Administration had done the same, but he rattled sabers that he doesn’t yet control, and which – due to the military misadventures he’s been cheerleading for the past 6 years – we don’t have at our disposal. He’s performing, in dress rehearsal, a weird hybrid role of King Lear and Mr. Wilson from Dennis the Menace screaming in the night that the Russians should get out of his yard. Meanwhile Putin and his puppy, Medvedev,  taunt America with a chorus of “who’s gonna make us?” and “oh, yeah, you and what army?”  This is not maverick, it’s madness – and it undermines national credibility in foreign affairs in ways Bush hadn’t even figured out, yet.

To lodge a specific complaint: saying “We’re all Georgians now” was not only a sad and thin misappropriation of honest sentiments offered to salve the wounds of American victims in the war on terrorism, it was also utterly hollow. For all that he, or any American President, could do militarily to help the victims of that terrible conflict, Maverick McCain may as well have said, “We’re all Kitty Genovese, now.”

Moreover, the Georgian debacle is evidence of a man whose career is beholden to special interests. McCain’s top foreign policy advisor, Randy Scheunemann, has long been the top lobbyist for Mikheil Saakashvili’s Georgian government. His TOP FOREIGN POLICY ADVISOR is on the payroll of the guy for whom he’s shilling. And this isn’t the only time the “anything but maverick” scenario has played out. On economic policy the cards are stacked the same way. Phil Graham, the one whose nuts McCain squashed a few weeks back when he called Americans a bunch of whiners, was his chief economic advisor and one of the principals in the gutting of regulations intended to constrain the energy and financial markets. His connections to lobbyists in the telecom and the petroleum industries stink no less and have been obscenely lucrative for his paymasters. Spin this how you like, but there is just is no comparison between Obama and McCain on this point. Obama isn’t perfect, but John McCain is a purchased politician. Any honest media outlet would have hammered that nail long ago.