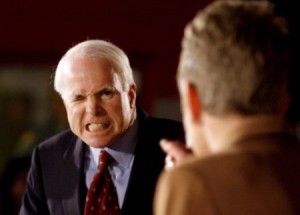 On domestic issues McCain offers little more than standard Republican “piss in your ear, tell you its raining” claptrap. Taking a page from McCain’s health care reform package – and, for that matter, his Social Security reform proposals – he is a doctrinaire adherent of the unregulated market. You know, the one that’s worked so well lately. His plans, roughly, are to turn – through tax rebates – thousands upon thousands of dollars, annually, back to “the people” and to allow them to purchase their own insurance and to manage their own retirement packages.

There is a gut level simplicity to these plans, and they both come with the catchy phrase, “trusting the people rather than the government” with our money. It’s pablum that any old ditto head can follow and it is standard issue Republican brand foolishness. If enacted it will lead to a run in the market and the illusion of a growing economy, but as surely as the plan to allow the housing or energy markets to become unregulated, it will lead to speculators and money managers building hot air portfolios for the economically unsavvy. The market, fresh with new liquidity, would overheat and then explode just like the tech bubble, the energy bubble and the housing bubbles before. If the American economy isn’t mortally wounded already, trusting delusional “free marketeers” with another turn at the wheel would drive a stake through the economic heart of the nation while greatly inflating the wealth of a few mandarins at the top.

McCain’s lobbyists may be rubbing their pale and meaty hands at the possibility, but if it happens, then God bless us all in ten years. We will finally have broken the system beyond repair.

The Surly Bartender - Honesty in Discourse