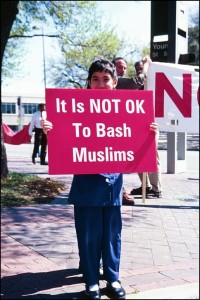 The Uncharacteristically Civil Bartender loves a good old-fashioned donnybrook, but there’s one going in Gotham City specifically, and around the United States generally, that actually has him worried. Further, the word from friends in Europe is that the same madness is brewing over there. Anti-Islamic sentiment is on the rise, even in the most tolerant of cities. To wit: less than two miles from the hallowed ground of my local pub, Flannery’s Irish on 14th and 7th, New York City has lost its mind over plans to build an Islamic Community Center — and that fight has spread around the nation with an increasing number of communities establishing roadblocks to the building of mosques in their midst. While I’m no stranger to the sound of chair legs being taken to glass jaws, I can’t help but feel that it’s high-time to restore some order, share a bit of barroom wisdom and welcome the combatants to a contemplative shot of either tea or tequila, depending on their respective religious beliefs. We’ll get back to the boilermakers and broken bottles soon enough. I promise.

First, for those of you who have not been paying attention to the furor up north, here is a short primer: In 2009 a Kuwaiti-American Muslim of the Sufi sect, Imam Feisal-Abdul Rauf, announced plans to build a Muslim Community Center, similar in style to a YMCA or a Jewish Community Center, at 51 Park Place in Lower Manhattan, approximately 600 feet from the site of the World Trade Center. Dr. Rauf, who has lived in New York City for 50 years, has served as the Imam of the Masjid al-Farah Mosque in New York City since 1983. Masjid al-Farah, saliently, sits less than 1000 feet from the site of the World Trade Center and has been at its 245 West Broadway location since 1985 without incident. Over his career Dr. Rauf has written several books urging moderate Muslims to speak out against extremists, condemned the terrorist attacks of September 2001, and been sought for counsel by two Presidents. In 2006, Rauf traveled with Karen Hughes, President Bush’s Undersecretary of State for Public Diplomacy, to the U.S.–Islamic World Forum in Doha, Qatar, and remained in close contact with her office until the end of the second Bush term. Rauf has continued working with the Undersecretariat during the first two years of the Obama administration. Most recently he was on a speaking tour to several Islamic nations with the mission of explaining what it is like to be a Muslim in an open society.

One can only hope that recent events haven’t soured him.

Imam Rauf is fully within his rights to build an Islamic community center on private property anywhere he’d like, presuming local zoning ordinances are obeyed, which they have been. The 1st Amendment to the Constitution reads, “Congress shall make no law respecting an establishment of religion, or prohibiting the free exercise thereof.” Yet, the issue arose during a political season, and when the smoldering hideousness of bigotry combined with the hot winds of high-stakes electioneering, a firestorm erupted. Those fires have since spread. Beginning in mid August, Fox News, The New York Post, numerous Republican leaders and several Democrats have been shouting from the rooftops their opposition to the “Radical Imam’s Ground Zero Mega-Mosque” which will “Tower Over Sacred Earth!” and “Defile the Memory of the 9/11 Heroes!”

It has not been America’s finest hour.

The scenes of protest around the Park 51 site, particularly on the anniversary of the September attacks, were bitter and vehement — including at least one man tearing pages from a Koran and setting them on fire while a chanting mob urged him on. Throughout the fall this ugliness has echoed back and forth from the American Street to Right Wing Blogosphere. Then the noise machine of a 24-hour news cycle which drowns out reason amplified and distorted nearly all of the facts.

This Imam is precisely the type of moderate Muslim the American political establishment has long called upon to condemn extremism, and he has answered that call. But prejudice has a blinding internal inertia. Hopefully we can still reverse its progress.

First, some facts: Dr. Rauf is currently using the Park 51 site as overflow space for Masjid al-Farah, a mosque that is, according to the New York Times, one of the “most progressive in New York City.” Rauf hopes that the community center, which will include a cooking school, a basketball court, an auditorium, a restaurant as well as a “prayer center,” will serve as a bridge between the Muslims of Manhattan and the larger community of New York City. Importantly, though almost completely overlooked in the media, Imam Rauf is adamant that Park 51, as the project is known, will house a prayer center, but will not be a mosque. According to the Imam’s wife, the reason is this: by Islamic tradition no Muslim — regardless of their ideology — can be kept from the sanctuary of a mosque. As a prayer center Park 51 will generally be open to people of all faiths, while at the same time, entry can be denied to radicals and extremists, or even just more conservative members of the faith. One reviewer on salotomatic.com (which purports to be The World’s Most Comprehensive Guide to Mosques and Islamic Schools) noted that “While, overall, the people [at Masjid al-Farah] are welcoming, they are not very welcoming of anyone who has a more conservative interpretation of Islam than they do.”

Take that for what you will, but it seems clear that the congregants at the al-Farah Mosque aren’t Osama’s Muslims.

But the question arises: can the opponents of the Park 51 Community Center actually accept that there are moderate, peace-loving Muslims who mean America no harm? If so, a second question remains: why, after 50 years in New York City and nearly three decades dedicated to peace and bridge-building, isn’t Imam Rauf celebrated as a progressive religious teacher who stands up to bigotry within and outside of Islam?