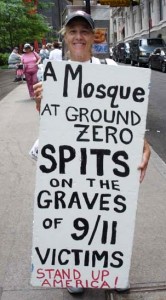 Rauf’s views have been wildly mischaracterized in recent weeks in the media, and the attacks primarily fall on two poorly contextualized quotes and one dubious historical analysis. The first is a quote wherein his opponents claim that Rauf believes that the United States should bow to Sharia Law. The full statement, made on C-Span while discussing his book, What’s Right With America is What’s Right With Islam, is below:

“Seven centuries ago, one of the most important jurists said all of Sharia Law is basically the fulfillment of five fundamental human rights: the right to life, the right to freedom of religion, the right to family, the right to property and what is called under Muslim law “mental wellbeing.” Now how similar to this is the American Declaration of Independence which declares that we were created equal, all men — meaning men and women — are created equal, were endowed by the Creator with certain unalienable rights which (among which, not all, but among which) are life, liberty and the pursuit of happiness, which [in the writings of John Locke] was originally property? Now when you look, when you unpack concepts and ideas this way, you will see this is why I call America a Sharia compliant state.”

At which point the audience laughs, presumably at both the audacity of the claim and the insight it provides about what is right with both America and Islam. The comparison has nothing to do with what is wrong — the imperfect political fulfillment of founding principles — about either America or Islam. Rauf believes that freedom is the proper human condition, he believes that, properly interpreted, Sharia Law supports those freedoms. If this is an extremist position, it is one diametrically opposed to the terrorists who attacked America nearly a decade ago.

The second quote, taken from a 60 Minutes interview with Ed Bradley, is below:

Bradley: “Are you in any way suggesting that we in the United States deserved what happened [on September 11, 2001]?”

Bradley: “Okay, you say that we’re an accessory?

Rauf: “Because we have been an accessory to a lot of innocent lives dying in the world. In fact, in the most direct sense, Osama bin Laden is made in the U.S.A.”

Two things come to mind. First, note that Rauf views himself as an American. “We have been an accessory . . .” Second, I don’t know about you, but I can’t help but agree with him. On the claim that “a lot of innocent lives” have been lost at American hands, you need only look at the intentional targeting of the waterworks infrastructure of Baghdad during Operation Desert Storm and the thousands of civilian deaths from cholera that followed, particularly amongst the very young and the elderly. And that is just one fact, well-known in the Muslim world, pulled from a drawer-full that I can access without even tickling my google. As to the claim that Osama bin Laden was “made in the U.S.A.,” it is well known, even in America, that the C.I.A. funded and trained the mujahedeen to fight the Soviets in the 1980s. Then, with one empire vanquished, they turned on the United States. Osama bin Laden was one of those soldiers.

What Rauf said was arguably unwise, politically. Yet, if we’re going to start zoning Lower Manhattan based upon the religions of individuals who accept the above facts, then New York City had better brace itself for the loss of virtually all of its churches, temples and ashrams, not to mention several dozens of its finest bars.

The dubious historical analysis is the charge that “Cordoba House,” the original name for Park 51, was an intentional insult to Christians as it recalls the building of a “victory mosque” upon the site of an earlier Christian church in Spain. When this line of attack was opened, Rauf changed the name. I assume he felt the fight was a distraction. And neither do we have much time for it here. I do, however, promise an explication of the events of the Moorish conquest of the Iberian Peninsula in the 1st Millennium and the subsequent Reconquista de los Reyes Católicos in the early 2nd Millennium if you agree to buy me a shot for every time that site changed hands over nearly 1000 years. But here’s the short version: In the early 8th Century the Grand Mosque of Córdoba was built on the site of the Visigothic Church of St. Vincent. However, what is less frequently mentioned by the “victory mosque” folks is that the Church of St. Vincent was, itself, built on the site of a preexisting Roman temple 150 years earlier. More to the point, by the early 14th Century the Moors had been pushed out of Córdoba (to their last Iberian redoubt in Grenada) and the Mosque had been rechristened as a church. By the early 16th Century, Rome and the Spanish monarchy had gutted the center of the mosque and built La Catedral de Nuestra Señora de la Asunción literally inside The Grand Mosque of Córdoba’s walls, with the chapel spire figuratively “stabbing through its heart” towards heaven.

If Imam Rauf was looking for an example of a “victory mosque” he picked a singularly lousy example.