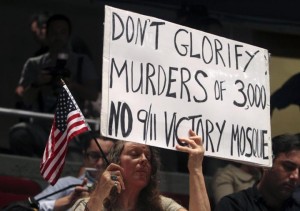 Without the distortions of the media and the outright lies of opportunistic politicians, neither Imam Rauf nor the members of the Masjid al-Farah could reasonably be accused of radicalism or extremism. He, they and the vast majority of people in the world, wish for some measure of peace and prosperity, safety for their families and the freedom to worship without interference or condemnation. I can make those assertions because they are simply in the numbers. And it’s to the numbers that we now turn.

The numbers are sobering on their own, or at least they should be. But to have their most profound impact, they need a cold, visceral and deeply uncomfortable comparison. You and I can agree, surely, that if there’s a more soul-wrenching crime than murder, it’s pedophilia. Grotesquely, many hundreds (if not thousands) of Roman Catholic priests have used, and are still using, the Church to cover up those crimes. There are approximately 400,000 Roman Catholic priests in the clergy and 2.5 billion lay Christians worldwide. Would it be right to condemn them all for the actions of so few? Would the building of a Christian church in a neighborhood be unacceptable because a neighbor’s child had been raped by a priest?

As we look at some numbers below, keep your answers to those questions in mind; apply the same visceral reasoning of what is fair and what is not at all fair as you consider the circumstances of Dr. Rauf and the congregants of the Masjid al-Farah.

There are an estimated 1.3 billion Muslims in the world. That’s about one-fifth of the total global population. Many of them, no doubt, harbor resentment against the government of the United States and its foreign policy, but being angry doesn’t make you a terrorist, or even a terrorist sympathizer.

There’s a long way to go from being enraged at a government and engaged in a fight. I’m regularly enraged by Iran. And for that matter by Israel. Or the Hamas government in the Gaza Strip. Saudi Arabia makes me want to pull my hair out and I even once got so furious at South Africa that I camped for a night with other protestors in a mock-Soweto shantytown in front of the administration building at Syracuse University. Yet, I never once considered killing innocent people in an act of terrorism. Have you? They call it extremism for a reason. Murder, like pedophilia, is an extreme act.

Consider just how microscopically few Muslims cross that divide between being enraged by perceived injustice and being engaged in actual violence. In July of 2010, Michael Leiter, Director of the United States National Counterterrorism Center, estimated that there were “somewhat more than 300” al-Qaeda operatives in Pakistan. Shortly before that announcement, Leon Panetta, Director of the Central Intelligence Agency estimated that there were between 50 and 100 al-Qaeda members in Afghanistan. Thus, American Intelligence officials put the actual number of the enemy in the central battleground of the War on Terror at under 500. That we’re fielding a force of more than 100,000 soldiers, airmen and marines to fight so few is a subject for another day. Today is about considering just how many Muslims can rightfully be considered “America’s enemies.”

With the amount of fear that radical Islamic terrorists have inspired in America, and knowing how that fear has curdled into prejudice and the loss of analytical acumen, only a fool would make the argument that there are only 500 or 5000 Islamic terrorists in the world — even if that is, in fact, the case. So I’ll concede a far higher number just to make a point. And I’ll go big. Let’s assume that Osama bin Laden leads an army of one million terrorists or supporters of terrorism in his network.

Seems a lot, but remember there are 1.3 billion Muslims in the world. Proportionally, that would mean bin Laden would represent (even with his fantastical army of one million) less than eight-one-hundredths of one percent of Muslims in the world (0.0769 percent to be precise.) In that example, fully 99.9231 percent of Muslims would not be terrorists or supporters of terrorism. Push the numbers fully beyond reason: imagine a world where one-hundred million Muslims support or participate in acts of terrorism. Still, in that utterly farcical world, they would still account for less than 8 percent of Islam as a whole.

To believe otherwise is to be both misinformed and bigoted, and that bigotry should be confronted and shamed, not excused.

But to close on a more positive note, America does have a way of self-correcting once the demagogues have been recognized and refuted, and in a small way I hope to have done some of that here. And to that end, I’d like to share a final story.

Recently I visited New York City and pulled a guest-bartending shift at my hallowed local, Flannery’s Irish Pub. That night, one of my closest friends and most favored patrons dropped by. His name is Fred Knight. He’s 87-years-old but still can put away Martinis like a heyday Rat Packer. He’s a World War II veteran who hails originally from an affluent family of mine managers in Western Pennsylvania. As he tells it, he was brought up straight, disciplined and Episcopalian. As always, he and I caught up on the news of the day, and the story of Imam Rauf kept us entertained for over an hour. I didn’t realize it until I walked away to serve another customer, but something happened in our conversation that spoke to a larger, American hope.

Fred told me that once, in the 1930s, as he and his mother were walking through their Appalachian town she pointed to the Catholic Church at the top of a hill and asked him if he “knew why the Irish always built their churches on hilltops?”

“So they can hide their cannons in the basement.”

Fred laughed and said to me, “I believed her for years! She believed it! OH! What a stupid thing to think!”

He laughed again, raised his glass and (intentionally or just out of custom, I do not know) gave the traditional Gaelic toast of good health, “Sláinte.”

And in our Irish Pub on this American island where not 100 years ago my ancestors may have been accused of terrorism, of being members of The Fenian Brotherhood, for nothing more than their Irish roots and their Catholic faith, I raised my glass and responded, “Sláinte Mhaith.”

It doesn’t seem likely at the moment, but if we do our part of decency, that Manhattan story might be realized again in this new century. And to that better day, with uncharacteristic civility, I raise my glass to you and say, “Inshallah.”

The Surly Bartender - Of Computer Worms and WikiLeaks