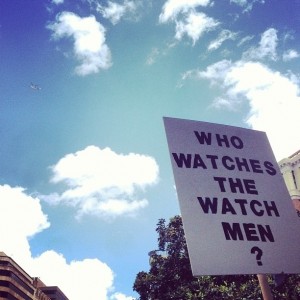 The PATRIOT Act allowed for the collection of the “metadata” of targets’ phone records, including the caller’s number and the called number, the time and length of such communications, and the payment methods for those services, complete with bank accounts and credit card numbers. In essence, it legalized the “mail covers” program for the cell-phone and internet age.

It is the PATRIOT Act that became the source law for the first revelations by Edward Snowden and reported by Glenn Greenwald in The Guardian. The Guardian report focused on the truly massive amounts of internet data gathered through the NSA’s previously-top-secret PRISM program. On the same day, a similar program focusing on the collection of phone records was revealed in the Washington Post. The Obama administration quickly released statements that both programs were legal and well-monitored by Congress. Which, as became apparent, came as a surprise to many congressmen who had never heard of either program.

When written in 2001, the PATRIOT Act did give the United States’ government the power to conduct such metadata collection, but it was intended to be discrete and target specific. Within a decade, however, the metadata of virtually all communications were being vacuumed up regardless of any suspicion of wrongdoing on the part of the individual user. On June 9, 2013, after the Snowden leaks revealed at least a part of these new data-mining protocols, the original author of the PATRIOT Act, Jim Sensenbrenner (R-Wisconsin), wrote an editorial in The Guardian stating that “The [Obama] administration claims authority to sift through details of our private lives because the Patriot Act says that it can. I disagree. I authored the Patriot Act, and this is an abuse of that law.”

As to the specific legality cited by the President, we are left in the dark. The judicial review necessary to determine the law’s constitutionality remains classified, and the only folks in Congress in the know (those on the Intelligence Committees) can’t speak about it. So we only have the Obama administration’s assertion that said review and oversight have been conducted by a) a court set up entirely outside the U.S. Constitution’s framework for the Judicial Branch and b) intelligence committees sworn to secrecy about its practical applications.

Even to an old lefty and diehard Obama supporter like me, such assurances are weak tequila.

But moving beyond that, The PATRIOT Act also allowed for roving wiretaps not envisioned by the original FISA Act of 1977. A roving wiretap allows the government to conduct surveillance on a suspect, not on a suspect’s particular means of communication. This was important to the intelligence agencies, as targets were now changing computers and using “burner phones,” cheap cell phones that would be used once and thrown away. (Viewers of HBO’s The Wire television drama will be familiar with the frustrations such regulations can cause for law enforcement. But had Bunk and McNulty been working for the NSA, they would have been able to skirt these requirements and the show would have lasted about three episodes.)

Opponents to roving wiretaps took particular issue with this expansion of policing powers, arguing they violated the “particularity clause” of the Fourth Amendment. The particularity clause features heavily in this debate about the collection of metadata, but you’d be forgiven not knowing that, as it’s way too confusing for the talking heads to explain in the breaks between Viagra ads.

All of these new powers granted to the intelligence agencies by the PATRIOT Act were intended to be subject to congressional oversight and warrants issued by a court set up under the original FISA law of 1977. This FISA Court has 11 members selected by the Chief Justice of the United States Supreme Court. These justices do not sit en banc to judge the weighty legal issues before their august body. They sit independently, and there are 11 of them so they can keep up with the thousands of secret orders and rulings necessary every year to allow the current administration to claim proper judicial review. But in any real sense, it is not judicial review at all.

The original FISA law also stipulated that the Intelligence Committees of the House and Senate would have oversight responsibilities, but in the years following 2001, the Bush Administration found these limited checks and balances to be burdensome and jettisoned them wholesale. By 2003 (though not revealed until 2006), the NSA, acting under orders of President Bush, were surveilling phone and internet records (and the content of those communications) of both Americans and non-citizens, within and outside the United States, without even the fig leaf of a FISA Court warrant and presumably outside of the knowledge of the Intelligence Committees.

It was, undeniably, illegal surveillance, and it was conducted in concert with major American communication companies who were assured that their participation would not blow back on them in the form of anyone ever finding out.

But, of course, people did find out. After a New York Times report and a Frontline television program on the Public Broadcasting Service revealed the extent of this abjectly illegal surveillance, Congress moved quickly to pass the Protect America Act of 2007. That act did not in any way challenge what the NSA had done. Rather, it granted retroactive legality to those actions, which seems to the Surly Bartender to create a conflict in the time-space continuum, but what the hell do I know?

The Bush Administration defended the surveillance on the grounds that it was intended to collect communications with members of al Q’aeda or other terrorist organizations and individuals within the United States acting against the national interest. The Protect America Act was signed into law on August 5, 2007, and in addition to retroactively giving the Bush administration a pass for blatantly violating the law, it also streamlined the procedures for identifying a target of surveillance. Now, so long as the NSA claimed that a target was “reasonably believed to be outside the United States,” then no FISA Court warrant would be required to initiate surveillance. Rather, the court would accept after the fact notification that such surveillance was being performed.

At this point it should be noted that in the quarter century since the creation of FISA Courts, only .03 percent of the requested warrants have been denied, so it’s not like the justices are actually burdening themselves with patient and careful adjudication on the merits of the case, while balancing the liberty of the people with a concern for the nation’s security. Since 1979, at least 33,949 warrant requests were made to the court, while only 11 were denied, with most of those denials being overturned by the FISA Appeals Court in short order. Moreover, the FISA Court proceedings happen in secret, only evidence by the government is provided, and all its deliberations and rulings are classified Top Secret.

In my Surly Opinion, the term “rubber stamp” seems too generous by far, and “meaningful judicial review” is even less applicable. Possibly they were going for “easy lay?” The world may never know.

But the Protect America Act of 2007 was written in haste (before folks had a chance to start suing the phone companies who gave the NSA illegal access to their trunk lines), so to gain enough votes for passage, it included a sunset provision for 2008. Thus, another law would need to be written to maintain legal authority by that time.

Which brings us to the FISA Amendment Act of 2008, the operative law now governing surveillance by the NSA.

The FISA Amendment Act of 2008 changed the state of play for surveillance significantly, and again in favor of the intelligence agencies. First, it codified — permanently this time — the immunity from prosecution for communications companies that had worked with the NSA. That was the story that got the most play at the time, likely as it was the easiest to understand. But far more importantly, it made permanent the 2007 rule that the NSA need not bother to obtain FISA Court approval (aka: get a warrant) to tap a phone line or fiber optic cables in the United States if one end of the conversation was overseas.

Saliently, for my readers in Guatemala, that means that the NSA can, without any external restrictions, monitor your phone calls and your internet activity so long as you are reasonably believed to be a “non-United States person.” Which, of course, for purposes of any initial investigation, you are.

If it makes you feel any better, the NSA is required to submit a “certification” to the FISA Court describing the communications being monitored and a “minimization plan” stipulating the procedures that will be used to avoid retaining the communications of innocent folks. But the NSA is not required to say how you were caught in their web to begin with. That’s just the way things work now.