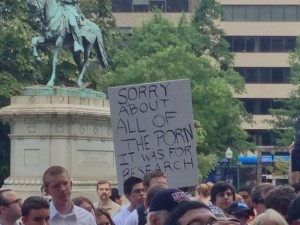 It is also important to reiterate that, as the law now stands, even if you are not a terrorist, any evidence of a major crime that is uncovered through NSA monitoring can be turned over to the FBI for further investigation. So, where the rubber hits the road, it’s probably okay to post on Facebook that you got high last night, but it’s a far more risky proposition to be in touch with a friend who might have some shady dealings back home, and you certainly don’t want to email your cousin about the pound of stellar bud you’ll be traveling with next month.

Take that as you will.

Why Have These Changes Been Made?

Here we have to get a bit speculative and technical, and I will rely heavily upon David Kris, a lawyer who served as the Associate Deputy Attorney General for National Security Issues from 2000 to 2003 under President Bush. He also served in the Obama Administration as the United States Assistant Attorney General for the National Security Division of the Department of Justice from 2009 to 2011. In 2008, writing for the national security website Balkinization, Mr. Kris provided a speculative context for the current debate over how deeply governmental surveillance is penetrating into our lives, and why. Specifically, he was writing about the FISA Amendment of 2008 at the time of its passage through the United States Congress. Of all the Surly Research I’ve done, his observations have shed the most light on the likely parameters of the current national security state.

As we move into a final understanding of how invasive state surveillance has become, it is important to remember that the NSA and the other intelligence agencies in the United States exist for a reason well beyond wanting to read your crazy girlfriend’s text messages or your drunk boyfriend’s email on a Friday night. There are some really bad actors in the world, be they nation states or terrorist groups. China is engaged in wholesale cyber espionage against the United States and other nations in the world. And, yes, the United States is likely doing the same to them. ANY government with the capacity to conduct surveillance will do so. That’s the nature of the world. That might not fit into a comfortable “America is bad” trope, but it is important to remember that your texts, phone calls, internet use and proprietary business information are likely being collected and sifted in Beijing and Tehran (not to mention Silicon Valley) as well as in Washington, DC.

Maybe more to the point, killing Osama bin Laden or the cracking of a Klan ring in Idaho didn’t wrap up the nefarious activities of terrorists around this pretty blue marble of a planet. The world is more interconnected than at any point in global history, and that interconnectedness increases the odds for the bad guys even more than it does the powers of the White Hats to stop them from blowing up clinics that provide abortion services or skyscrapers in New York City. In a world of asymmetrical warfare, massing armies on borders can no longer keep us safe from the evil that small groups of determined villains can propagate. It doesn’t necessarily make the depth of the surveillance or the lack of greater oversight right, but keeping it in mind does allow us to retain a sense of just how intricate a forest it is through which we now wander.

With that said, here’s the field of play.

It should come as a surprise to absolutely no one that there is an eternal struggle between the establishment of laws, the enforcement of laws and the review of laws in a democratic society. That was the brilliance of de Montesquieu’s understanding for the need to separate powers between a legislature, an executive and an independent judiciary. James Madison’s further iteration of that principle in an interlocking network of checks and balances became the weight-bearing internal architecture for the entire government of the United States. Sadly, that system has broken down badly in the current debate.

When it came to the executive’s power to enforce the law, both Montesquieu and Madison understood that cops are always going to want to bend the rules to catch bad guys, and further, they are going to want the rest of us to trust their intentions if we happen to get caught in the crossfire. This was the case with the illegal expansion of the “mail covers” program in the 1970s, the Bush administration’s wholesale junking of the entire FISA structure in the early 2000s, and it is the case currently with the New York City police department’s aggressive surveillance of mosques and Islamic community centers in Gotham. History has shown time and again that giving free rein to law enforcement is a devil’s bargain. Which is why, in the context of surveillance, every once in a while the legislature needs to throw a heavy cross-check on the executive branch. The Church Committee did so in ’75 and, arguably, it’s time for Congress to do so again now.

As stated above, in order for the NSA to catch terrorists, it needs both speed and agility. This is clearly allowed with the current legality of warrantless surveillance, but wanting even greater speed and agility, the NSA may have once again stepped fully outside the already loose bonds placed upon them by FISA. At the moment, there is no one to knock them back into line other than a mobilized public demanding change. And that is a frightening place for a nation and the world to find itself. Without a countervailing force, governments are virtually unable to self-correct. And, apparently in the years since the FISA Amendment Act of 2008, that drift to greater authority for the NSA and less liberty for the citizenry has manifested in some very specific ways.

As Mr. Kris notes, there are three important requirements constraining the NSA under FISA. First, legally it must be determined that a “target” is either a foreign power or is working for a foreign power. Second, there are laws determining how the surveillance is being employed by specifying a particular “facility” being used by that suspect. Third, there must be a process of “minimization” in place to protect those NOT being targeted, but who get caught up in surveillance because they are using the same “facility” as the target.

In order for the NSA to be as speedy and agile as they can against crafty opponents, it is important for them to define both the “target” and the “facility” used as broadly as possible. Doing so will yield the most intelligence information with the fewest court orders necessary to continue their mission.

As Kris points out, identifying the “target” broadly is easy cheese for the NSA under current FISA regulations. Rather than stating to the FISA Court that your “target” is a specific terrorist (Jihad Johnny), you say your target is the passel of pricks he’s running with (Jihad Johnny’s Consortium of Infidel Slayers.) Under FISA, this is pretty straightforward and sensible. With notable exceptions, few potent terrorists are islands. They exist within communication and financial networks that are determinable, given good investigative work.

The change that is most troublesome to those concerned with civil liberties in this current debate is the likely change in the interpretation of the word “facility.” Here I advisedly use the term “likely,” as we don’t actually know what has happened. To be assured of this change, we would need to have the FISA Court’s ruling on the matter, and as mentioned many times above, such rulings are classified top secret. Yet, given what we now know through Snowden’s leaks, like a footprint in the snow, making an educated guess about how the definition of “facility” has changed is straight-outta-Baker Street elementary.

Traditionally under the original FISA law of 1977, a “facility” was a ten-digit phone number or (if the same criteria were applied today), an email address. This suited well the above concern about the particularity clause of the Fourth Amendment. Under that amendment, a warrant would need to be reasonably “particular.” The police, if they were looking for a murder weapon, would have to specify to a court that they wanted to search a suspect’s house. A warrant to search all of the houses in a given neighborhood would be insufficiently “particular.”

The language in the Fourth Amendment is clear, and rather than turn back to the first page of this article, here it is again:

“The right of the people to be secure in their persons, houses, papers, and effects, against unreasonable searches and seizures, shall not be violated, and no Warrants shall issue, but upon probable cause, supported by Oath or affirmation, and particularly describing the place to be searched, and the persons or things to be seized.” [Emphasis mine.]

Yet, what seems to have occurred is that the government, first under Bush, and now under Obama, has successfully persuaded the FISA Court that the international gateway switches, which are the junction points between the United States and the rest of the world’s communications, are reasonably particular “facilities” under the law.

Understanding this is crucial for seeing how entirely the system of judicial review has been inverted when it comes to national security. As recently as a few years ago, the NSA and the FISA Court were expected to at least pantomime the procurement of a warrant for each specific telephone number or email address. But it seems that in the past few years this pretense has been disposed of wholesale.

Now, rather than making a specific request of the FISA Court, the NSA needs only to get a handful of warrants for ALL the email addresses or phone numbers, provided that they move across the phone lines or the internet. Which, of course, they all do.

As Mr. Kris points out with great understatement, “that is very speedy and agile.”

Prior to this change, the “minimization” process for those caught up in surveillance without justification was not terribly significant, simply because there weren’t that many innocent folks getting caught up in investigations of international terrorism. Now, however, “minimization” of any damage done by the surveillance of everything that happens on the internet or over phone lines is a massive problem, indeed.

The Surly Bartender - A Look Back in Anger at Clinton vs. Trump