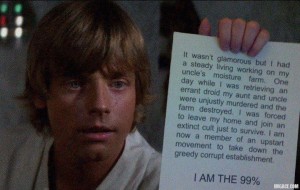 A few nights ago, while slapping shots across the hardwood at Café No Sé, a favored customer asked if the Surly Bartender would be commenting on the Occupy protests occurring, at last count, in over 200 cities through out the United States. I raised my glass, he raised his, and I said, “They’re right. End of comment.”

Really, is there much more to say?

They are right that political power in the United States is skewed, grotesquely, in favor of wealth and corporate influence. They are right that the health care delivery system in the United States costs twice what it does in any other industrial nation, provides worse coverage and is the cause of over half the personal bankruptcies in America. They are right that deregulation of the financial markets (under Democratic and Republican administrations alike) set the kindling and dried the forest in advance of the inferno touched off by the housing market collapse of 2008. They are right that the household incomes of the bottom half of the population in the United States have stagnated over the past forty years, while the income of the top one percent has increased by 275%. And they are right to note that the tenuous increase in household income over that time (18% for the bottom quintile, and generally shitty for the next 40 percent above) came not from wage increases for individual workers, but by households needing two wage earners in order to keep the wolves from the door

They are right that this has been a long, steady and policy-driven process in which the wealth and political power of the nation has been funneled upwards. For those of you old enough, you may even remember the episode of All in the Family back in the mid 1970s when Edith had to get a job. Norman Lear saw where the nation was heading way back then, though I have a feeling that Archie Bunker would eat his hat before joining Michael (Meathead) Stivic in Zuccotti Park.

The 99 Percenters are right about all that stuff. And they are right about the broader truth that America, after 30 years of assault on the very notion of a civil society, has broken faith with the next generation, saddling them with debt (personal and public) that they are now expected to bear, while not providing them the employment opportunities to do so.

They’re right. They played the socioeconomic game by the rules as were explained to them (take a student loan, take this mortgage) and a job will be waiting for you. Invest in your future and we’ll all rise together. But now they’re fucked. And now they are waking up to that truth and trying to do something about it. Maybe they’ll even make some difference. I sure as hell hope so. But as my Surly Friend and I were houning down the mezcal I thought, “what’s to comment upon any further?”

But the idea of doing a column got under my skin and as I drank about it some more, I came to the conclusion that there are some issues upon which we might reflect. Particularly as pertains to the way the 99 Percenters are being presented in the media, and therefore defined by the first draft of history.

The major media has been pretty consistent everywhere but on Fox News. The story we’re told is that they seem like nice kids, but they don’t really know what they want. Fox, of course, portrays them as anarchists and socialists who know exactly what they want: blood running in the streets! Which, if you think about it, is hilarious as that same organization would happily deride them as a bunch of French speaking, anemic, vegan pussies given half a chance.

Pro forma: Fox is full of shit. But the other narrative is just as off base.  The protestors know very well what they want. Troll one of their websites (www.occupytogether.org), or their Tumblr feed (www.wearethe99percent.tumblr.com) for an hour or so you’ll likely be surprised at the depth and clarity of their message.

What they want in regards to deregulated financial markets is a return to the banking practices before the repeal of Glass-Steagall, which would redivide community banking practices from investment banking practices. There are also those who would take it a step further and demand that the largest banks and financial institutions (the ones that are “too big to fail”) be broken up into more manageable, and less dangerous, sizes.

Come to think of it, I’d be down with that, too.

What they want in regards to the disproportionate influence wielded in our political system by wealthy individuals and corporations is equally as clear: They want publicly financed public elections. They want an overturning of both Buckley v. Valeo (1976) and Citizens United v. The Federal Elections Commission (2010), two decisions that, respectively, declared money to be equal to speech and that it was unconstitutional to place limits upon the spending of that money when advocating for a particular candidate or idea. Some of them even want a Constitutional Amendment to reform campaign finance regulations (as recently offered  in Congress by  Democratic Senator Tom Udall of New Mexico.)

If you talk health care policy with most of them, you’ll hear a fairly informed explanation about the benefits of a single payer system, or the mollifying effects of a robust public option on the predatory nature of the insurance market when left to its own devices.

Student loans? You’ll hear support for programs that would decrease debt loads for professional degrees that lead to careers in public service, like general practice medicine, teaching or nursing. Also along those lines, they want a strengthened and modernized G.I. Bill.

Oh, and they want jobs.

Their message is not radical, even if the methods of occupation are. But, generally speaking, they have come to the realization that their interests are not being served because of the nexus of power and money that finds its roots in Wall Street.

Now, if you want, you can also find people carrying the torch for animal rights, or anti-death penalty crusaders, or those wanting to warn us all of the impending alien invasion, but the core message — delivered at the absolute center of a financialized economy — is that the game has been rigged and it is effecting the health, safety, security and economic opportunities of the vast majority of citizens in a supposed democracy.

Almost despite themselves, the media seems to have understood the central point — that this is about an intrinsic unfairness in the United States — and the debate’s center of gravity has changed from deficit reduction to income inequality, but you still don’t get much detail. It’s far easier to run a puff piece on the wackos, the drum circles and the wiggly thing they do with their fingers while consensus building (Google “99% and wiggly fingers” and you’ll see for yourself) as that makes  the news more entertaining, though less informative. But the representatives of the 99% that are out there in public squares around the country know what they’re talking about. They know what they want, but their answers are as complex and varied as the questions. Sadly, that doesn’t play well in the modern era of sound-bite journalism.