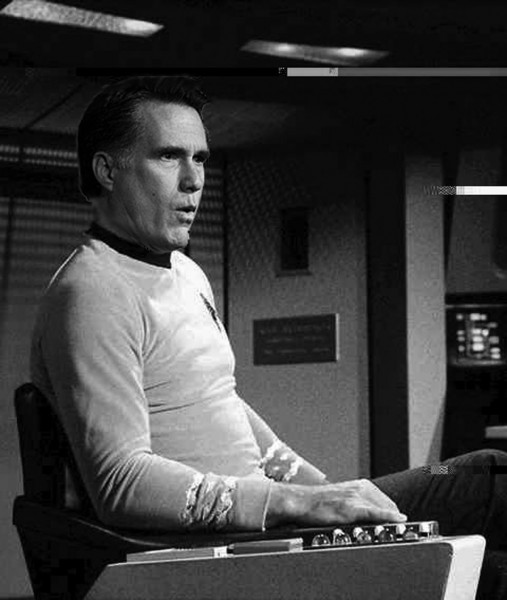 Captain’s Log, Stardate 050511.1. Primary Alpha One, Preparatory Exercises for the Newtral Zone War — My suspicion has grown that the other officers on this training mission may actually be insane. Don’t they understand that our prime directive is to determine the fittest, most square-jawed leader in our coming battle with the rebellious Admiral Gingrich? The Admiral appears to have secured extra-protocol financing from the Los Vegons for a new rapid-deployment, low-information weapon system. A weapon that must be secured for the Battle of N. Silver 538 in the coming General Electoral Wars. Now, the entire mission is at risk.

The black guy who only shouts a single number and the woman with Rigelian Staring Sickness have teamed up with Lieutenant Sweatervest in an attempt to launch a flanking maneuver on my right. Both Captain and Crew are in grave danger — and of more than just a blown tee-time. Ha. Ha. Ha. I am funny.

Captain’s Log, Stardate 091411.3. We’re entering the outer reaches of the Newtral Zone. I’ve forestalled, for now, the flanking maneuver by the woman with Rigelian Staring Sickness, Lieutenant Sweatervest, and the black guy. I believe he mentioned something about a working at a restaurant. Is he a waiter? Possibly a valet? I must remember to ask someone, but it would be awkward now.

This morning, while on routine patrol, the ship passed through a subspace anomaly near the distant relay outpost of N-Word Head, in the Texanian System. Our scanners showed that it was an ion storm of  unprecedented electromagnetic interference caused by a scheming band of Murdocks. Through a rift in the time-space continuum, my doppelganger suddenly materialized on the bridge. We were equally matched in goodness of looks and squareness of jaw. At first I tried a flying butterfly kick to his chest, but he withstood the blow. Then, using my superior mental skills, I confounded him in debate after debate, belittling him with the generosity of my gambling offers. In the end, though he spoke a more fluid form of the vernacular on Starbase: Southern Stronghold, I was able to defeat him, despite my universal translator becoming stuck on “Preening Tool.” Maybe the black guy knows someone who can fix it. I can’t be bothered with such trivialities. Don’t they know I’m running for Captain for Pete’s sake. Hmmmm . . . Maybe that’s his name. Pete, or Petern, or something. Maybe Nurse Anne can find out for me?

The end came for my doppelganger when, due to either an error in the replicator or a congenital disability, Commodore Perry, as he was known, went mad after forgetting how to count to three in front of an auditorium full of cadets. He was last seen steering his shuttle craft directly into the gullet of the Doomsday Machine. The poor fool even managing to screw that up.

Nothing else to report, with the exception of a gremlin the others refer to as Ronpol who keeps appearing outside my window in the captain’s quarters. I must speak to maintenance.

Captain’s Log, Stardate 010412.3. In an unexpected turn of events, the woman with Rigelian Staring Sickness was hit by a reason disrupter at close range. The suddenness and totality of her absence has cast a dark pall over the remaining officers.

In other news, I have determined that black one was a pizza delivery boy who had been shouting about the bill. I presume someone finally transferred the nine hundred and ninety nine credits into his account, as he departed some time ago to spend time with one of his wives. I may have some of the facts there incorrect. Still, I’m glad that he’s left Star Fleet. No one liked him. They only pretended to as the captain of the opposing army also comes from his planet. But, really, who wants someone running around shouting “Nine, Nine, Nine,” when we’re trying to rescue the Jewish Vote from Boca Ceti Three. Ha. Ha. Ha. I made another joke. I must tell Nurse Ann. She loves my the sense of humor sub-routine I had installed for this mission.

Captain’s Log, Stardate 042412.7. Today we arrived in the Newtral Zone to find it devoid of all matter. It was as if The Newtral Zone and the threat of Admiral Gingrich had always been a mirage, a ruse. But before this could be considered, Lieutenant Sweatervest had sealed himself in the Ship’s Midwestern Decks and was attempting to take command from the Battleground Bridge. Things were dicey for a while, but I was able to dispatch him with a fusillade of negative energy weapons. On last report, he had retreated to his stronghold in the Pennsylytucky System to drink “Bitter dregs . . . Mmmmmm . . . Bitter dregs.”

Ha Ha Ha. I made a self-referential joke that only the true Star Fleet “Trekkers” will understand. I am getting very good at this thing the humans call humor.

Captain’s Log, Stardate 053012.3. The Battle Begins. Having vanquished my primary challenges, I am now in command of my own Starship, The Romneyprise. Her crew is a mix of young and old generations, and they are somewhat disconcertingly rebellious. But it is almost inconceivable that we will fail in our mission. Our engines are powered by a matter-antimatter reactor that will allow us to remain cloaked in either a severely conservative cloud of presumed fidelity to “core reactor principles,” or a shielding of moderate warp energy, depending on the needs of the moment. The Chief Engineer, Eric “Scotty” Fehrnstrom assures me that, in case of emergency, we can perform a Tricorder-a-Sketch maneuver he has perfected, and escape with our forward phaser banks (manufactured on the slave planet of Koch) intact.

I have recruited Lieutenant Paul Data as my second in command. He is much beloved by the citizens on Starbase: Tea Party, for his often endearing, but always fruitless, attempts to attain true humanity. It has been reported that his father, Dr. Noonian Soong, died shortly after mating with an evil, morally repellent android designated A.Y.N. Rand. He is in top physical condition, and has boyish good looks. Sadly, I fear it may be realized that his programing will only allow him to perceive the complexities of the universe with the emotional maturity of a 17-year-old Advanced Placement English student.

If this is discovered, all may be lost.

Captain’s Log, Stardate 101712.5. Emergency. Emergency. Red Alert!!! Red Alert!!! Battle Stations!!! Battle Stations!!! After soundly defeating the enemy captain in our first meeting, all has flown into an intergalactic tizzy. This crew that I’m attempting to lead are of no use to me! Who designed this universe? Una baya podrida, as my grandfather would have called him on Me-He-Ko Prime. I thought I could lead them, but look at what I have! My communications officer is a woman who probably supports inter-species miscegenation and a Romulan’s right to choose! My chief medical officer is a good-for-nothing Liberal, always spouting-off about the need for proper medical care for all. How many times can I hear, “Damn it! Mitt! He’s dead. He’s dead, Mitt,”?

I know he’s dead! But he should know well enough that you don’t step in front of an exploding baffle plate without decent health insurance! That’s a preexisting condition once it happens. We just don’t play the game that way!