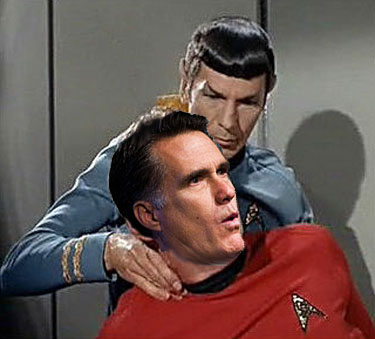 And Ensign Chekov? Why, he’s the greatest threat to ship security in the 23rd Century! And don’t get me started on Mr. Sulu. He’s as gay as a picnic basket and has started a blog about me on the ship’s communication network, always firing off witty jokes at the expense of traditional Star Fleet values! And now that I get a better look at him, that Worf fella is a dead ringer for one of those New Klingon Panthers that were suppressing the vote on Galorda Four a few years back!

Then, while I fearing a ship wide mutiny may be in effect at any moment, over the communication system comes a voice singing drunkenly, “Have no fear, Bill O’Reilly’s here!” Yammering on about how female crew members should “Wear their rights loosely about their shoulders. And not so much makeup.” Good god. What am I to do with these people?

Lieutenant Data is no help. After a simple away mission to a retirement planet in the Andromeda Keys, he’s been placed in a Tholian Web for his own protection by Scotty Fehrnstrom for the remainder of the mission.

How did this all go wrong so quickly? How did I get in this deep? They told me a Kobayashi-Maru test was a way to win the Asian vote!

Captain’s Log, Stardate 102312.8. All is lost. After an unexpected accident caused by the collision of the U.S.S. Starships Akin and Mourdock, the Romneyprise suffered heavy damage to the forward shields. I was assured that if it were a legitimate attack, that our shields had a way of shutting that whole thing down.

As a last hope, I turned to Admiral McCain for advice. But when they wheeled him in, all he could offer were answers to yes or no questions. “Admiral McCain, is there a path left for me to win the Electoral Wars?”

I believe that means no. Which is odd, as he appeared to be forcing a smile through the frozen grimace of his ancient face.

Captain’s Log, Stardate 110412.9. The past week we have been hidden in Ion Storm Sandy. It is either impossible for our opponents to track our movements, or they simply have no concern for where we are. And so we drift from solar system to solar system, making feinting moves towards one planet or another in hopes that this will draw attention away from our desperate state. Still, Scotty Fehrnstrom and all those who remain loyal to me seem as placid as the trees in my old home of Michigan. Goodness, I love those trees. They’re just the right height.

And so we wait.

Captain’s Log. Stardate 110712.1. After six long years of valiant effort, I am alone. Only Nurse Ann remains by my side. Our enemy has finally revealed himself, riding in a Starship of a heretofore never seen design (at least not on this network). My sons tell me that it is something called a “Battlestar,” and that it occupies a darker, yet more appealing universe for the younger generation.

Soon I must surrender, though Operative Rove is still sending subspace transmissions via the Murdock cloud that, “The numbers just don’t add up.”

I fear the man may have finally lost his marbles after all this time living as a mole-man, supping off of table of stronger species who live in the light of day. How could I have allowed myself to be led so far astray by such fools?

In the end, I am on the bridge with my rambunctious crew. For all of my dreams of a better world, they just had a different perspective, one that maybe I should embrace. Pride, it is true, goeth before the fall. And that was the last message I left to them as they transported over to the Battlestar: Pride goeth before the fall.

Sadly, I’m not sure they heard me. They were in deep conversation about the new captain they’d be following on their continuing voyages. One of them said that they’d heard his name was Adama.

I corrected them, though I doubt they were listening.

“He pronounces it Obama. And I wish him well.” I said. “He’ll need it with you unpredictable lot as crew.”

Beam me up, Scotty.