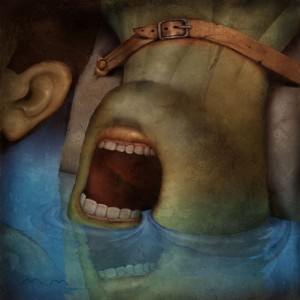 Back in the early 1980s Robert Klein had this bit.  He’d recently been to Germany and was amazed that he couldn’t find anyone who actually admitted to having supported the Nazis during World War II.  Klein noted that everyone he talked to claimed to be as innocent as lambs.  His line to sum it all up:

To explain how the Nazi regime was able to erase 6 million Jewish souls from the world in little more than a decade, historian Hannah Arendt coined the phrase “the banality of evil.”  She argued in “Eichmann in Jerusalem” that the work of the Holocaust, specifically, and all great evils in history generally, aren’t perpetrated by sociopaths or zealots alone, but rather with the help of ordinary people who generally agree with and accede to the goals of the state.  The butchery becomes normalized.  The work becomes bureaucratic.  In this sense everyone who chose to not examine the extent of the tragedy, everyone who saw the trains full of Jews going Eastbound and returning Westbound with the fruits of their forced labor and chose not to connect the dots, was complicit in the horror.

Even with a shot and a beer, that’s a pretty hard pill to swallow.

Klein’s observations aside, the Germans have actually done a pretty good job over the past 60 years of addressing this sad reality.  They examined their history, they read Arendt’s book and others like it.  They understood on a cellular level how banal evil had become in their society, and they acted to become better than they were.  Far too late, but they acted.

I feel for young German travelers.  It seems that wherever they go, at some point they are forced to address the Nazi question.  Over and over again the shadows of the Holocaust encroach upon the conversation, even if the questions are only obliquely inferred.  What did your grandfather do during the war?  How could Germany be so evil?  Are you the descendant of Nazis?  I feel for them, but this is their historical burden, and in general they bear it well.

Recently, while tending bar at Café No Sé, I witnessed such a discussion between an earnest your American kid and a German traveler.  I mentioned Arendt’s book.  The German kid knew it; the American kid had to have “banal” defined.  And when I wondered aloud if such a book might soon be written about the United States, the German kid nodded his head, and solemnly clinked my glass.  The American kid got offended.

I told the Klein joke, but neither of them laughed.

But, on a sobering note, what will my kids say when they’re drawn into a boozy conversation decades from now and in a distant bar about the first decade of the 21st Century and America’s role therein?

Did your parents know what was going on in the camps?  If so, why didn’t they do anything?

Our camps are different from theirs.  Clearly.  And to presume the hate mail I’ll receive for this piece, I am not suggesting that the United States is intentionally pursuing a policy of extermination and genocide in our endless War on Terrorism.  But in our camps we are committing crimes, sins and shameful acts, and in a just world those actions demand prosecution, confession and contrition.

There are enough low hanging apples on the tree of our collective sin to give Eve the trots for eternity – unnecessary war, hundreds of thousands of dead dropped into a historical mass grave named only “collateral damage,” the shredding of our rights to privacy, free speech, freedom of assembly, habeas corpus, the right to a fair and speedy trial, and on and on and on.  Yet, there is one fruit swollen to sickness with the ferment of our increasing barbarity.  Let us taste its acid on our tongue.