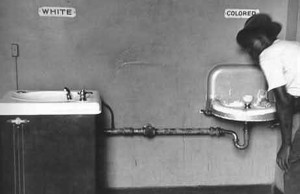 It was a sermon about the dangers of hubris and selective morality.  It was a sermon about the dangers of viewing some citizens as fodder for your cannons, your cotton fields or your correctional facilities to the benefit of other more valued citizens.  When Americans look, directly and clearly, at their own history – and they see that time and time again that dynamic has played itself out – then why should any of them sing God Bless America, particularly those who are asked, seemingly eternally, to be bear a brutal burden for the others?

While, to be honest, the Surly Bartender doesn’t see the sense in singing God Damn America, he doesn’t see much sense in singing for her blessing either.  There’s too much work to be done to waste time with silliness like that.  And the work that needs to be done, the perpetual reorientation of America towards the central operating principles of love and justice, and the recognition of its own fallibility, is the substance behind the heat of Reverend Wright’s sermons.

Kurt Vonnegut, one of the Surly Bartender’s heroes, once noted that, “The highest treason in the USA is to say Americans are not loved, nor matter where they are, no matter what they are doing there.”  And judging by the reaction of the right wing of American media to Reverend Wright’s comments, one would have to conclude that this is true for the domestic arena, as well.

Senator Obama distanced himself from Reverend Wright words, arguably, because he seeks to be a messenger for that continuing change – and the realization that the Reverend’s style has much in common with the bomb throwers on the right.  Moreover, Obama is both a result of, and a catalyst for, the change that Reverend Wright preaches, and if he wishes to fulfill that promise, he’ll need to court voters susceptible to the propaganda onslaught launched against his friend.

But, again, that doesn’t mean his friend is completely wrong.

The sins of reservations for Native Americans and internment camps for Japanese Americans are not of this generation – but they are real.  Yet, even if the reparation for those crimes has not been perfectly paid, the government has changed.  The sins of the pre-civil rights era were addressed and corrected – though not perfectly – by Civil Rights warriors, Reverend Wright included, and a nation that finally saw the errors of its ways.

But the struggle continues and there are many sins of the past decades of United States history for which it has yet to atone and he outlines several of them in his sermons.

Maybe he could have been forgiven pointing out the sins of an America long past, but to suggest that it is a nation not fully deserving of love and reverence – in the sense that Kurt Vonnegut understood – is high treason.

It should not be so; a principled and evolving nation should welcome its dissenters.