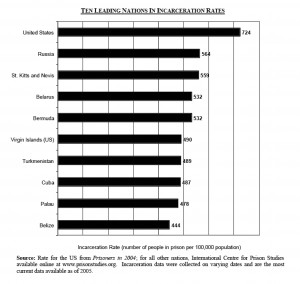 There is a difference between what is impolitic – and shocking to jingoistic ears – and what is factually incorrect.  It was certainly impolitic for Reverend Wright to claim that the drug enforcement policies of the United States have imprisoned millions of African American men, in percentages far greater than it has so done to their White brothers in the drug trade.  But it is true.  During the Reagan years drug laws were implemented that brought punishments to offenders caught with crack cocaine that were 100 times harsher than those caught with powder cocaine.  The punishment for possessing 1 gram of crack cocaine was, and largely remains, equal to the same punishment for possessing 100 grams of powder.

Powder cocaine, prohibitively expensive for most of America’s poor, was a relatively minor problem in the early 1980s.  (According to the DEA, the real price of cocaine has dropped by 89% between 1975 and 2003 – statistics that, no doubt, are familiar on a visceral level to a number of the readers of this magazine.)  But crack, cheaper and more potent than powder cocaine, flooded the disproportionately African American ghettos of Los Angeles, Chicago, New York, Detroit and Washington in the first years of that terrible decade.  Hence, the effects of the Reagan era drug laws – as they were applied to the cocaine trade, did, in fact, lock up far more African American men than laws dealing with the largely White and wealthy American powder cocaine market.  The ramifications of those economic and legal changes are felt still.  On that point, Reverend Wright is indisputably right.

These are facts, and while it is more difficult to defend that these drug laws were intentionally designed to trap men of African descent into the penal system, cripple their careers and in many states permanently bar them from voting – the results remain.  According to the Prison Policy Initiative (www.prisonpolicy.org) the incarceration rates for African American males in the United States is nearly 6 and a half times higher than for White males.  The numbers grow even more disparate when considering the number of African American males between the ages of 25 and 29.  Within that population a disturbing 12.6 percent are currently incarcerated.  Whatever the motivations or causes, this must change; for a nation to be blessed, this must change.

Maybe it is hard to prove that these are the desired results of policies designed in a smoke filled back room next to the hoods and the hangman’s noose, but a simple comparison merits mention.  In 1992, at the height and high water mark of South Africa’s Apartheid regime, 891 of every 100,000 Black men were in prison, whereas, in 2003 in the United States that number was 4,919.  As the Prison Policy Institute notes, “What does it mean when the leader of the “free world” locks up its Black males at a rate 5.8 times higher than the most openly racist country in the world?”

This may be disturbing to mention, but it is the reality in which we live, and it must change.  If America is to have claim to the blessings of God or the mantle of Justice, it must change.

To quote Human Rights Watch in their year 2000 report, ‘Key Recommendations from Punishment and Prejudice: Racial Disparities in the War on Drugs,’ “The racially disproportionate nature of the war on drugs is not just devastating to Black Americans. It contradicts faith in the principles of justice and equal protection of the laws that should be the bedrock of any constitutional democracy; it exposes and deepens the racial fault lines that continue to weaken the country and belies its promise as a land of equal opportunity; and it undermines faith among all races in the fairness and efficacy of the criminal justice system. Urgent action is needed, at both the state and federal level, to address this crisis for the American nation.”

These are the changes that Reverend Wright is talking about; they are just couched in different terms.

Extending his criticism beyond the borders of the United States, Reverend Wright notes that the American government, throughout the Reagan years, considered Nelson Mandela and his African National Congress to be terrorists and continued to support the apartheid regime of P.W. Botha long past the time when its fangs dripped with the blood of millions of innocent Black South Africans.

This may be impolitic to mention, but it is factual, and if The United States forgets that history it can have no claim to be making the changes that it must.

Whether this support was given with the intention to aid a global partner in anti-Black racism, or if that was just the by-product of defending corporate dollars invested in Pretoria is almost beside the point.  If IBM computers were used to maintain that system, and they were, and American laws and investment strategies were designed to maintain American corporate investment in South Africa, and they were, then the United States of America bears, in part, that sin.

And while Reverend Wright doesn’t speak directly to these issues – the United States’ current engagement with the Chinese government while it continues its brutal repression of Tibetan society highlights its collective indifference to behaving ethically, more ethically, than other nations in the world today.  The United States bears that sin, and unless God hates Buddhists (or women, or child workers, or political prisoners) – he’s not likely in the mood to be blessing America these days, anyway.  Same shit goes for America’s relations with the Saudis, the Uzbeks, the Kuwaitis, and – who knows? – the fucking Martians.

But amongst Reverend Wright’s most scathing – and current – attacks on the United States’ Government is his charge that it “…gives them the drugs, builds bigger prisons and passes a three strikes and your out law…” leaving millions of African Americans languishing in the penal justice system.

Wow!  Now that seems legitimately crazy!  The United States Government “gives” illegal drugs to its own citizens and then arrests them for incarceration in ever larger prisons?  Wow, that guy’s nuts!

As we move this argument towards the present, and the blood of today’s collateral damage, let’s divide this statement into its three constituent parts.  Has the United States been “building bigger prisons?”  Undoubtedly.  The overall prison population in America has quadrupled since 1980.  Moreover, in that time, many of these new prisons have been built and are run by private corporations – who then lobby the legislatures to maintain, or make more severe, sentencing guidelines so that their jails will be full and their profit margins will increase.

In this field of nightmares it is true.  If you build it, they will come…

The Surly Bartender - Worse Than Nixon?

Not on your damn life.
By Michael Tallon
Monday, December 22nd, 2014