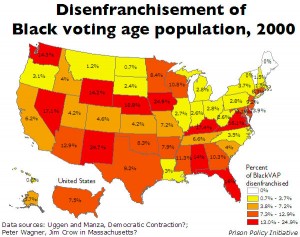 According to “The Sentencing Project,” and advocacy group for the reconsideration of current prison sentencing regulations, (www.sentencingproject.org) the total number of inmates in the United States prisons and jails stands at 2.2 million.  That is a 2.7% increase since last year and, unless reforms are made to the sentencing guidelines, those numbers will continue to increase.  For an international comparison of incarceration rates, please see the graph on this page.

The Sentencing Project looks directly at the guidelines that judges must follow when determining the punishment for a convicted criminal.  One of those guidelines, referenced by the Reverend Wright, is the Three Strikes and You’re Out Law.  Functionally, this means that upon one’s third felony conviction, he or she is given life in prison – no exceptions.  This rule was put into place in the early 1990s to get habitual and dangerous criminals off the streets.  While it may have served that purpose, it has also caught hundreds of thousands of non-violent criminals, mostly violators of drug possession and distribution laws, into lifetime sentences.  These convicts, as we have already seen, have been disproportionately African American.  As they were in wars past, it is marginalized citizens who are the collateral damage of the current War on Drugs.

But what of the third charge related to the incarceration of Americans of African descent leveled by Jeremiah Wright against the American government?  He claims that somehow the drugs are brought to the addicts with the complicity and collaboration of that same government?  Could that be possible?  And if so, would it merit at least a “God Damn!” of shock, horror and surprise?

Well, get a shot glass and a whiskey bottle full of God Damns ready, because the answer is an unmitigated yes.

Since at least World War II the United States government has collaborated with organized criminal enterprises that were in the business of smuggling drugs into the United States.  The history is long, complex and very ugly – but the Surly Bartender strongly urges you to do some research into Lucky Luciano and Meyer Lansky.  These classic machine gun-in-the-violin-case gangsters worked with the Office of Naval Intelligence (the progenitor of the CIA) providing information on potential Axis spies on the docks in New York and New Jersey.  When Luciano got himself into a bit of trouble, Lansky interceded with his ONI buddies and got Lucky Lucy sprung on parole and resettled him in Italy – and from the rolling hills of Sicily, he continued, unmolested, to make his millions by importing heroin through those selfsame docks.  He got what he wanted, the ONI got what they needed, and the denizens of the poorer quarters, you know, the ones where the ragged people go, were left holding the bag.

The connections between the American intelligence community and organized heroin traffickers continued for the next 30 years through the Chinese Civil War and the Vietnam War with the CIA striking deals with the drug barons of the Golden Triangle.  These connections are brilliantly examined in “The Politics of Heroin” by Alfred McCoy.  During the 1960s and 1970s, according to McCoy, the relationship between the CIA and organized drug trafficking in South East Asia was both pervasive and casual.  He doesn’t suspect that the CIA was intent on poisoning the streets of America.  Rather, it was just “business.”  The CIA had a series of military problems.  One of those problems was controlling the Viet Cong supply line – also know as the Ho Chi Minh Trail.  They couldn’t do it on their own, so the CIA developed a working relationship with a local ethnic group that had neither love for, nor attachment to, the governmental or to the Viet Cong.

This group, the Hmong, were opium growers.  They were willing to fight for money if they could also continue their traditional business.  In the last century British and French colonialists had done a marvelous job creating a self perpetuating market for opiates and the Hmong were trusted suppliers.  So, during the Vietnam War, in essence, the military needs of the United States combined with Hmong self interest and a mercenary army of 30,000 soldiers was formed.  They disrupted, to the best of their ability, the Ho Chi Minh Trail in Laos and in return, they were allowed to continue trafficking opium.  Thanks for the Quid.  Here is your Quo.

This policy was, and is, short sighted.  This policy did, and does, demand a price.  That price was, and is, paid disproportionately by the poor and the marginalized on American streets – the streets that feel the pain and fill the cemeteries in cities like Reverend Wright’s Chicago.

If you were in Reverend Wright’s shoes and you saw your community being ripped apart by drugs and you knew that your own government, the one that is obliged to protect your neighborhood, was involved in bringing those drugs to the streets – and by extension, sending your parishioners, parents or pupils to prison or an early grave – wouldn’t you be more than a bit upset?

This calculus of misery reached an apex in the 1980s, when the CIA – operating in Central America during the Nicaraguan Civil War – knowingly employed indicted drug traffickers to haul guns and money to the US backed Contras, and – at the very least -turned a blind eye to the return shipments of cocaine that would be processed into the new and devilish product, crack, in the United States.

Gary Webb, an enterprising investigative journalist exposed many of these connections in his ground breaking “Dark Alliance” series, written for the San Jose Mercury News in 1996.  His story traced the connections between the right wing Contra movement – a reconstituted security force of the deposed Nicaraguan dictator Anastasio Somoza Debayle – with the street gangs of Los Angeles who were busy distributing crack with devastating effects.  He further suggests that the CIA was actively involved in creating and maintaining these networks.

Personally, I tend to believe Webb’s reporting, though it was buried under an onslaught of attacks from the main stream media, the Justice Department and the American Intelligence Community.  After an initial stir, Webb’s story was torn apart and soon the words he wrote and the words that those who opposed him claimed that he wrote were hopelessly muddied in the American mind.  Webb was driven from his job, blacklisted from a further journalistic career, and a few years back he was found dead from an apparent suicide.  According to the coroner’s report he shot himself in the head.  Twice.

So rather than wading into those dangerous waters, let’s just examine a part of what is on the record – the Congressional Record.

Some time ago Senator John Kerry held a series of public investigations into the alleged connections between the American government and drug traffickers working with the Contras.  The Kerry Committee’s report, (available in its entirety at http://ciadrugs.homestead.com/files/kerryinvestigation.html) uncovered the following facts.

2.       The Contras knowingly received financial and material assistance from drug traffickers and that the United States government had information regarding the involvement while it was occurring or immediately thereafter.

3.       Payments were made to drug traffickers by the U.S. State Department from funds authorized by the Congress for humanitarian assistance to the Contras.  In some cases these drug traffickers had already been indicted by federal law enforcement agencies or were under ongoing investigation.

4.      The CIA’s Chief of the Central American Task force stated on the record that, “We knew that everybody around Pastora (Eden Pastora, Contra Head Honcho) … was involved in cocaine.”

5.      Sworn testimony was received from the Miami prosecutor’s office that some officials at the Justice Department had met to discuss how “to undermine” Kerry’s investigation.

6.      The head of the Costa Rican “air force” and personal pilot to two Costa Rican presidents, Werner Lotz, swore that Contra operations were funded by drug operations.  He testified that weapons for the Contras came from Panama in planes carrying mixed loads which included weapons and drugs.  The pilots unloaded the weapons, refueled and headed north towards the U.S. with drugs.

7.      Drug pilots used Contra airstrips to refuel, even when they had no weapons on board, because they knew the authorities would not check them as the war was “protected.”

Sounds like a bit of collusion to me!  And don’t you suppose that if one avenue for drug trafficking were “protected,” whereas others were exposed to the dangers of police intervention, that its volume would increase exponentially?