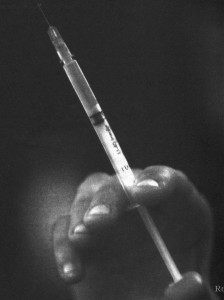 The run down of connections between the CIA, the State Department and the Justice Department of the United States government goes on and on in Senator Kerry’s report, but we need not belabor the point.  Clearly, even without attempting to parse all of the connections found by Gary Webb (and also by Jeffrey St. Clair in “Whiteout” or in the book “Powderburns:  Cocaine, Contras and the Drug War” written by former DEA operative Celerino Castillo III and his coauthor, Dave Harmon) it is clear that the Government of the United States, the one that Reverend Wright refuses to call blessings upon, knowingly involved themselves in a drug trafficking network that has led to the destruction of countless lives in his community.

And if you think these connections are all just an unfortunate history – consider the following.  Right now the government of the United States is fighting a war in the richest opium fields of the world, Afghanistan.  What do you suppose would happen if a CIA operative or a Special Forces soldier had access to information about al Qa’ida from individuals involved in the heroin trade?  What do you suppose would happen if, to get that information, the CIA had to turn a blind eye as narcotic filled lorries headed for the border?

Assuredly, the trucks would run and the drugs would continue barreling ahead, all the way to Chicago.  Many Americans would even want them to.

It was wrong in ages past to sacrifice the lives and rights of Native Americans, Japanese Americans and Americans of African descent for the military, economic and social benefit of other citizens, and it is wrong today.  And it is happening today.

If your job was to speak for those people, to shepherd that flock, what would you say?

If you were a Fair and Balanced God, would your blessings flow down like a mighty river upon such a land – or would you remind the inhabitants of the consequences of refusing, at long last, to truly care for the least of their brothers with decency, honesty and justice?

As the Surly Bartender recalls, that’s in the Bible, too.

It’s High Time to Call Them Out, Starting in Arizona
By Michael Tallon
Monday, February 17th, 2014