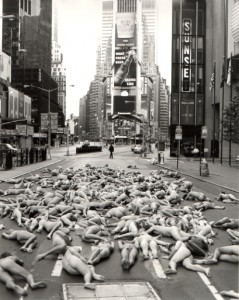 The Morning After Our Kind of Times Square Party

When I first moved to New York it still had the Nurse Ratchet of normalcy by the neck in a white knuckled grip – but the corporate orderlies were circling with medications prepared, even as I chose to ignore their imminent threat. The neighborhood supermarkets were filthy and poorly kempt, the stock boys and the checkout girls provided service with a disinterested scowl. You could still count on the C.H.U.D.S. emerging from the subways if a blackout occurred. You could still find an affordable apartment in the darker corners of Gotham. Forty-Second Street was still home to crack whores, karate movies, junkies and porn. There was home delivery of marijuana, if you wanted. COST-REV’s tags adorned every flat surface. You could still smoke in the bars.

It wasn’t Akron, but it was alive.

Then, somewhere around 1993, everything started to change. The Möbius causality of the new New York and Rudy Giuliani has never been clear in my mind – but the interrelation is there and undeniable. Rudy always seemed to have felt that drag queens and flamboyantly gay men were best mocked on political stages or kept behind closed, rent-controlled apartment doors to which he had been lent the key. Rudy led the charge that “we had to take back our city,” even as he cheated on his wife and his kids surfed a cresting wave of hate towards his arrogance. He came to clean house, without any acknowledgment that some of us liked it just the way it was. Lived in and lusted for. Wild and untamed. The City that Never Slept and Seldom Bathed. Before the purge, New York City was a tension riven stand-off between the dirty and the clean. There were fights around the edges: sometimes the reckless rocked the boat to the point that the staid pushed back. Sometimes the good citizens organized community boards to drive away the dirty and sequester their freedom. In general, there was parity and tolerance – and in that struggle was life.

H.L. Mencken once defined Puritanism as, “the haunting fear that someone somewhere may be happy” and it was against that wheel of spiritual intolerance that we placed our queer shoulders, nightly. In those years, I had faith that New York would never submit. But as the decade wore on the end game came ever more clearly into view. Rents were driving out both the working people and the welfare artists. Gentrification was socially cleansing even the Lower East Side. Neighborhood stores were falling to the power of the chain-gangs like Whole Earth Foods. Real estate developers were being ogled like pop-stars. Lounge music was making a comeback. I felt that something was going wrong but the changes were slow enough, and the beast untamed enough, that the cancer of sameness slipped in silently.

But, then, in 1995, that all changed – New York finally went to the doctor and heard the hardest word ever muttered in Modern America: inoperable. When the Walt Disney Corporation decided to cornerstone the “rejuvenation” of Times Square I had to face the reality that my city was terminal. Oh, for the days when the only Mickey you’d find in midtown was the old Irish drunk pouring over his racing form. Oh, for the days when the dwarves of the wharves were Skelly, Corpsey, Junkie, Crazy, Snorty, Stinky and Doc. Oh, for the days when finding Snow White meant something else, too.

When I finally left New York for Guatemala in 2004 my home of 14 years had been utterly transformed. It had become, for all intents and purposes, a 24 square mile shopping mall surrounded by snoring bedroom communities. Soaring rents and mortgages had bled the color from nearly all of Manhattan. By the early years of this new century, most of my friends had been forced by a phalanx of brokers and fashionistas to look elsewhere for cheaper, if not greener, pastures. They returned home to dead industrial shells Upstate, or back to be with their dying parents in the Midwest. Some of them were able to illegally flip their rent-controlled apartments and put down payments on cottages way the fuck up the Hudson River Valley. Other’s got married, had kids, and gave into the prefab siren call of life on the purgatory of Long Island. One or two expatriated. A couple died. A few, a very few, still hang on to their fifth floor walk-ups and their couches upon which to crash when I make it back North – those few remaining unsnatched souls abide to guide me to the rare bars where the illegal smoking lamp is lit by midnight. God bless them. I fear for their dark, clotted, and beautiful souls daily. They are now the hunted.

But as I walked down the corridor of LaGuardia Airport last year a New York Post headline caught my eye and reminded me that all is not lost. On the front cover was the teaser for a story about a couple of skells so true that they’d tried to pull a caper using their dead friend’s body to score them a few hundred bucks.