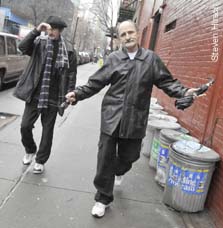 Our Kind of Heroes – O’Hare and Daloia

David Daloia, my new hero, and his running partner, James O’Hare – both 65 years old, were living with a third friend named Virgilio Cintrón on West 52nd Street. Over the years the men had each built up rap sheets as long as your arm – mostly robbery, vagrancy and disorderly conduct citations. These guys were old-school conmen and scammers – getting by, tweaking out, gambling wild, drinking hard and generally having a ball.

In January of 2008 the three of them, Daloia, O’Hare and Cintrón, were living together in one of the few remaining tenements on the West Side that hadn’t been converted to “luxury apartments,” just a few blocks from the modern horror of Disney on Times Square, scrapping to get by and hoping for another score, another morning coffee miracle. Opportunity presented itself when Virgilio cashed in his chips to diabetes the same day his Welfare check came in the mail.

After rubbing last night’s hangover out of their eyes and trying to wake the bluing Cintrón, Daloia and O’Hare took the dearly departed’s check down to the Pay-O-Matic cashing joint on 9th Avenue to get the $355 that he was owed. If he couldn’t use the money, he’d sure as hell want to give it to his best friends. Right? $355 bucks is a barrel of booze. Unfortunately, and predictably, the automaton behind the counter refused to honor the check without the signatory present, so like the gorgeous, rock-bottom New York, New Yorkers they are, Daloia and O’Hare hatched a plan.

They stumbled back to the apartment, propped up the recently departed Cintrón in a rolling office chair, wrapped him in a blanket, carried him down the several flights of stairs and carted his caster-wheeled corpse out into the brilliant, beneficent winter morning and back towards the Pay-O-Matic.

They never made it.

As they rounded the corner on 9th and 54th, they ran into two righteous citizens of the New Order, one of whom whispered to Daloia, “He looks pale, do you want us to call 911?” To which our hero responded, “Ehhh, sure. What the hell…”

I’m sure he was thinking, “It’s always, ‘go the authorities’ with these fuckin’ people.”

The cops were summoned and they ascertained, immediately, that Cintrón was quite dead and the beautiful plan to get enough money for a weekend of festivities – to celebrate the life and death of their good friend – was tragically lost.

Later that day, when Daloia was asked by reporters for a comment on Cintrón’s rather skim-milky pallor, he said, “He looked like that every fuckin’ morning. Of course I didn’t know he was dead.” Then, taking in the crowd of reporters, he continued with, “Christ, I’ve robbed banks and I didn’t get this much coverage!”

The two men faced charges of larceny, attempted larceny, and failure to properly bury their friend. If convicted, they faced seven years in the pokey, and I figured that in the new New York, they would have to serve every minute of it – but maybe, just maybe, like the tumbling depressive plunging off the Golden Gate, The City ain’t quite dead, yet. She still might learn to fly, or at least try to flap her broken wings.

Daloia and O’Hare finally went on trial about a month ago. The news vultures assembled – ready to mock the kill – and yet, miracle of miracles, O’Hare and Daloia were acquitted! It seems that the prosecutor couldn’t prove that they actually knew Cintrón was dead, which, considering the stairs and the rolling office chair, seems pretty hard to believe.

I’m guessing that a few of the jurors must have kept a piece of the old New York in their hearts as they refused to convict. May God bless and keep them. They hearken dawn for our overly regulated, coddled and castrated civilization.

That’s the way we all should look at it – and we shouldn’t be ashamed. Even if the tragedy involves a dead guy, a crime and some shifty-eyed characters, it still speaks of life and adventure and the resistance to rules that make existence fun. It is hilarious, and if you don’t think so, if you find it offensive or too debased to befit modern man, then you’re just as much a part of the problem as that $500 haircut who wanted me to make him a mango mojito.