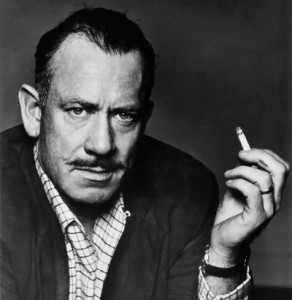 THE WESTERN LAND, nervous under the beginning change. The Western States, nervous as horses before a thunder storm. The great owners, nervous, sensing a change, knowing nothing of the nature of the change. The great owners, striking at the immediate thing, the widening government, the growing labor unity; striking at new taxes, at plans; not knowing these things are results, not causes. Results, not causes; results, not causes. The causes lie deep and simple—the causes are a hunger in a stomach, multiplied a million times; a hunger in a single soul, hunger for joy and some security, multiplied a million times; muscles and mind aching to grow, to work, to create, multiplied a million times. The last clear definite function of man—muscles aching to work, minds aching to create beyond the single need—this is man. To build a wall, to build a house, a dam, and in the wall and house and dam to put something of Manself, and to Manself take back something of the wall, the house, the dam; to take hard muscles from the lifting, to take the clear lines and form from conceiving. For man, unlike any other thing organic or inorganic in the universe, grows beyond his work, walks up the stairs of his concepts, emerges ahead of his accomplishments. This you may say of man—when theories change and crash, when schools, philosophies, when narrow dark alleys of thought, national, religious, economic, grow and disintegrate, man reaches, stumbles forward, painfully, mistakenly sometimes. Having stepped forward, he may slip back, but only half a step, never the full step back. This you may say and know it and know it. This you may know when the bombs plummet out of the black planes on the market place, when prisoners are stuck like pigs, when the crushed bodies drain filthily in the dust. You may know it in this way. If the step were not being taken, if the stumbling-forward ache were not alive, the bombs would not fall, the throats would not be cut. Fear the time when the bombs stop falling while the bombers live—for every bomb is proof that the spirit has not died. And fear the time when the strikes stop while the great owners live—for every little beaten strike is proof that the step is being taken. And this you can know—fear the time when Manself will not suffer and die for a concept, for this one quality is the foundation of Manself, and this one quality is man, distinctive in the universe.

THE WESTERN STATES nervous under the beginning change. Texas and Oklahoma, Kansas and Arkansas, New Mexico, Arizona, California. A single family moved from the land. Pa borrowed money from the bank, and now the bank wants the land. The land company—that’s the bank when it has land—wants tractors, not families on the land. Is a tractor bad? Is the power that turns the long furrows wrong? If this tractor were ours it would be good—not mine, but ours. If our tractor turned the long furrows of our land, it would be good. Not my land, but ours. We could love that tractor then as we have loved this land when it was ours. But this tractor does two things—it turns the land and turns us off the land. There is little difference between this tractor and a tank. The people are driven, intimidated, hurt by both. We must think about this.

One man, one family driven from the land; this rusty car creaking along the highway to the west. I lost my land, a single tractor took my land. I am alone and I am bewildered. And in the night one family camps in a ditch and another family pulls in and the tents come out. The two men squat on their hams and the women and children listen. Here is the node, you who hate change and fear revolution. Keep these two squatting men apart; make them hate, fear, suspect each other. Here is the anlage of the thing you fear. This is the zygote. For here ”I lost my land” is changed; a cell is split and from its splitting grows the thing you hate—”We lost our land.” The danger is here, for two men are not as lonely and perplexed as one. And from this first ”we” there grows a still more dangerous thing: ”I have a little food” plus ”I have none.” If from this problem the sum is ”We have a little food,” the thing is on its way, the movement has direction. Only a little multiplication now, and this land, this tractor are ours. The two men squatting in a ditch, the little fire, the side-meat stewing in a single pot, the silent, stone-eyed women; behind, the children listening with their souls to words their minds do not understand. The night draws down. The baby has a cold. Here, take this blanket. It’s wool. It was my mother’s blanket—take it for the baby. This is the thing to bomb. This is the beginning—from ”I” to ”we.”

If you who own the things people must have could understand this, you might preserve yourself. If you could separate causes from results, if you could know that Paine, Marx, Jefferson, Lenin, were results, not causes, you might survive. But that you cannot know. For the quality of owning freezes you forever into ”I,” and cuts you off forever from the ”we.”

The Western States are nervous under the beginning change. Need is the stimulus to concept, concept to action. A half-million people moving over the country; a million more, restive to move; ten million more feeling the first nervousness. And tractors turning the multiple furrows in the vacant land.