This story is only loosely connected to the holiday season. It takes place at the end of the summer and there is only one phrase that tangentially connects subject to theme. There’s neither eggnog nor mulled wine and the only pines in sight were standing dead by the millions in the beetle-killed Chugach National Forest on the Kenai Peninsula of Alaska. Yet, while there are no Christmas carols or roasting chestnuts, there is a Rose and she did share a rare and beautiful gift even if our entire friendship transpired through the rear-view mirror of her late 1970s Chevy Malibu about 15 years ago.

At the time, I was traveling with Patricia, a beautiful woman from Adelaide who I’d met a few weeks before in Anchorage. The first day at the hostel I overheard her chatting about how much she wanted to go kayaking – which led me to grab a Lonely Planet and a telephone to have a series of unnecessarily loud conversations with various guides in the area about the virtues of fiberglass over plastic boats. Obvious or not, the play worked and that evening we were sharing a halibut dinner and planning our hitchhike down to Resurrection Bay the following morning for a week at a remote hostel and kayak camp owned by a couple who are now two of my close friends.

As it turns out, Patricia and I got on like a house on fire and over the summer we would log thousands of miles on the side of the road, about one hundred hiking in the mountains, and dozens and dozens in our kayaks. There is a particular sense of one’s humanity in the Alaskan bush – and also on the side of an Alaskan highway. Being out in the big mountains, looking over ice fields with black basalt peaks shooting skyward through glaciers thousands of years old brings up feelings of both humble insignificance and universal connectedness. Seeing an 80,000 pound humpback breech to your right and watching his bubble trail pass beneath your kayak only to surface on your left does much the same. Almost bizarrely, hitchhiking in the northlands does so, too. In each scenario, at every moment, you are aware that your number could be up. Yet, just as you trust that the next grizzly won’t eat you and you won’t be flipped from your kayak by an aggressive whale, you trust that on the highway north of Seward your next driver won’t kill you either. You have faith that that he or she won’t be any more than half-drunk and still be taking their anti-psychotics – or at least you hope that the gun will jam at the last minute if everything goes horribly wrong.

Patricia and I, touched by that good fortune and sense of humble connectedness, had the best possible run of hitchhiking luck that summer. We never had to wait more than an hour for a ride. We’d been invited to camp on people’s property, we’d been offered a free gun as “an equalizer” when we were heading into the back country (we declined, as neither one of us wanted the extra weight), we’d been picked up by an elderly couple named Earl and Mavis in an RV because we looked like “a couple of nice kids,” which I decidedly did not. We even made it from Homer to Denali National Park in a single day – a hitch of almost 700 miles for which we’d figured two days minimum, with one night likely spent on the side of the road. Thank you, Tim, wherever you are! 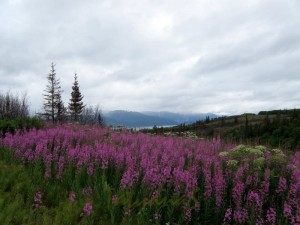 As a last hurrah for the season, Patricia and I decided to do one more trek outside of Seward before we had to catch separate flights back to our own corners of the world. The trail we chose was only about twenty miles long, the first leg following the Lost Lake Trail and the second on the Primrose. The Lost Lake trailhead is about 10 miles north of town. It’s a pretty steady climb the first few hours, up through the devastated spruce forest, but once you clear the timberline the vistas become overwhelmingly beautiful with high alpine lakes set like cold sapphires in seas of lupine and fireweed, themselves ringed by a horizon of snow-covered and glaciated mountains.

The skies were clear and the days so long that had we wanted to speed the journey we could have finished it in two legs, but that’s just not the point. Rather than racing, we would lounge on our Therm-a-Rests after coffee and oatmeal in the morning or freeze-dried lasagna at the end of the day. In the low-angled light of an Alaskan midnight we’d sip hot chocolate spiked with bourbon and listen to the wind, or to the wolves howling in the distance, before making a small fire and bedding down for the night.

Over our four days of perfect freedom on the trail we spotted at least a dozen bear, both brown and black, and the hillsides were continuously marshmallowed with Dall sheep and mountain goats. We wanted for absolutely nothing. We had each other and the universe. It was as perfect a time as I can remember in an admittedly blessed life.

As we ate our vittles and drank our booze, the packs got lighter and we began the descent down the Primrose Trail through a part of the Chugach that had yet to be debarked by the beetles. The Chugach is a temperate rain forest, and the silence of all but our footfalls stepping over nurse trees from which the next generation was growing gave me the sense that if a heaven existed, its designers followed these same rough-hewn plans.

In the early afternoon of our fourth day we stepped, a bit hesitantly, off the trail and walked the half mile down to the highway where we leaned our packs against a tree and hung out our thumbs for the twenty miles back to Seward and a hot shower. We hadn’t been standing there for more than ten minutes when an old sedan pulled over about thirty feet in front of us. On the lip of the trunk was a bumper sticker that said: “I Kissed Santa in North Pole, Alaska!” and below that was a license plate with a wheelchair icon between the tag numbers on either side.

Patricia and I exchanged looks, shrugged our shoulders, grabbed our bags and jogged up to the car. The driver handed me the keys and told me to toss our gear in the trunk. Bending over I noticed that in the front passenger’s seat was her wheelchair.

We climbed in the back seat and the driver, Rose, offered us some crumb cake she’d made for her boys. She must have been in her sixties and was not the type of person one would expect to pick up a couple of filthy hikers fresh from the trail. She said she was driving over from Homer to visit family, and she told us about her grandkids, awkwardly pulling out her wallet and handing it back to us so we could look at the pictures. Then, just as we were pulling up to the hostel, Patricia leaned forward, gestured at the wheelchair and asked Rose why she picked us up. It was a fair question. Here was a woman who was utterly defenseless. She was – by our limited perception – old, sick and crippled. She’d just handed us her wallet. We could have stolen everything from her, had we been people who would do such a thing.

Rose said, simply but with the resonance of deep compassion, “Oh, honey, I know what it feels like to be stranded.”

I swear I could hear a whooosh as the individual atoms of selfishness were sucked out of my soul and replaced by Rose’s empathic strength. I’m not sure we deserved it, but that is the nature of grace. It comes on the wind, touching the worthy and the unworthy alike. The choice is now upon me: Do I burn with the same affirmation? Will I strive to bring lumens of hope to my brothers and sisters on the side of the road?

I’m sure as hell gonna try.

After we got our gear out of the trunk, I bent over the driver’s side window to thank Rose again. She patted my hand and wished us luck. Right then I promised myself that someday I would write a story about her to let other folks know about the gift she shared with a couple of travelers somewhere within a long day’s hitchhike of the North Pole.

Pick up the latest issue of La Cuadra for your mobile thingamadick here.