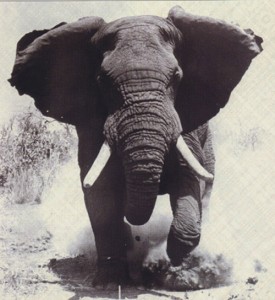 If one bears in mind the amount of marijuana I had smoked, my actions might seem slightly less retarded. Or not. Remove the influence of mind-altering substances and we probably wouldn’t have been hitchhiking through a civil war zone in the first place. Nor would we have decided to illegally enter a wildlife preserve on foot. And I certainly wouldn’t have lingered so long in the path of a wild elephant. Hell, take pot out of the equation and there’s a good chance I wouldn’t have ended up in Sri Lanka at all.

Let’s back up a little.

Sri Lanka in 2005 was a country devastated by the Tsunami of December 26th 2004, and laboring under the strain of a civil war, bombing and shooting its way into a third bloody decade. Government was corrupt at best and social services non-existent. Racism and misogyny were (and are) entrenched to the point of ubiquity. And in this climate of fear, starvation and hardship, I sat on the veranda of a beautifully-restored British colonial mansion smoking spliffs and discussing an upcoming break in the relief work schedule with my roommate, confidant, and partner in crime, Uncle Money.

I don’t recall exactly what was said, but I imagine it went something like this:

Uncle Money: So dude. We have some days off coming up.

Uncle Money (taking the spliff): Because of the election. They’re counting all the ballots in the fort so we have like four days off or something.

Uncle Money (exhaling): I was thinking we should do something, mate. Take a trip or some shit.

Me (taking the spliff): Yeah. Totally.

Uncle Money (taking the spliff): Let’s go to Trincomalee. We haven’t even seen much of the country. Let’s go.

Me: Isn’t that kind of the epicenter of the civil war?

Uncle Money (exhaling): Yeah. Should be a lot going on.

And so it was decided. We would go to Trincomalee. The front of the front lines of Sri Lanka’s civil war. And we’d be going during a hotly disputed, and incredibly divisive, presidential election. Brilliant.

But this story isn’t about war. This story is about elephants. And weed.

I think it was day three of our cross-country odyssey when we started hitching. I think. I know we had just left Sigiria, where we had spent an absolutely hair-raising night wandering by ourselves down dirt roads through thick jungle while stoned out of our minds. In my mind the evening is defined by the giant holes in the brush where the elephants had emerged, crossed the road and disappeared again on the other side. There were huge, arching portals scattered across the sides of the road as if the jungle were inhabited by large numbers of four ton rats. At one point a jeep pulled dustily up beside us and a woman shouted from beneath an olive-green safari hat “What the hell are you doing out here? Don’t you know there are elephants on this track? Wild Elephants?” To which Uncle Money replied “Really? Where?”

He seemed delighted by the prospect of pachyderms, but I was spooked. In general, I have no problem with elephants, having spent time with them in the past, but the prospect of encountering a wild bull, suddenly and at very close range in the dark unsettled me. I lost my shit, freaked out and dealt with it by bitching and moaning until my plea to return to the hotel was granted. Then we got high and went swimming. I thought that would be the end of it, but Uncle Money had gotten a whiff of elephant stink and was determined to encounter one at some point. When we got back to the room we checked the maps and found a game reserve within striking distance. Tomorrow’s destination.

We started out in a tuk tuk. And I think we might have arrived in a tuk tuk. I can’t be sure. I seem to remember stopping for a joint, some breakfast, and a beer. It couldn’t have been past ten in the morning. We walked into the visitor center at the game reserve and discovered, to our immediate displeasure, that while entry for locals was a mere 50 rupees, foreigners had to pay something on the order of 4000. About 40 US dollars, and well out of our price range if we expected to keep ourselves in drugs and alcohol for the duration of our trip, which we did. We decided to hit the road on foot, with the expressed intent of finding an entry point at some discreetly bushy section of the road. Here and there we ducked in, wandered up a creek bed, walked around a while smelling the sour sweet musk of elephant around every corner, but we never encountered one. They were around, to be sure, but they were surprisingly stealthy.

After much mucking about we headed back out to the road and hitched a ride in a van that had, in place of a back seat, the axle and wheels from some kind of small automobile. We sat, cramped and wary of the rolling chunk of metal with which we were housed, until I glanced through the window and caught a brief glimpse of sparkling blue between the green locks of the jungle. “Stop!” I shouted. “Stop. Stop. Stop!” Our driver pulled to the side of the road and Uncle Money looked at me quizzically. “What’s up?”

That was all he needed to hear.