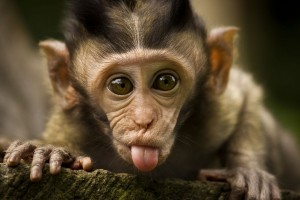 Monkeys are the worst. They’re like terrifyingly strong, long-armed dwarfs with a penchant for thievery. Only hairier. People from places that don’t have monkeys usually love them, but folks from monkey-rich areas know better. I used to love monkeys too, until I had to deal with them.

My first inkling that our nimble cousins might be dicks came from an experience in Dharamsala, India. I was walking back to my guest house after poking around in the temple of the Dalai Lama (his home base while in exile from Tibet is on the edge of town) and I stopped to pick up an orange from a tiny, rough-hewn fruit stand on the side of the road.

The little shack perched on the edge of a steep and densely forested embankment, and its owner sat on a plastic stool beside his wares. The other side of the street abutted a cliff, which rose several stories in a series of broad, broken ledges. As the fruit vendor chatted with a sari-clad woman who had stopped to buy a pineapple, he kept looking up at the cliff.

I couldn’t tell what he was looking at. Partly because the cliffs were really steep, but mostly because I’d been smoking hash all morning, and every time I turned to gaze up the sheer face I’d forget what I was supposed to be looking for.

It wasn’t my fault. A Spanish juggler at the guest house insisted the temple would be better stoned. It was peer pressure, straight up. Just like that episode of Full House when Stephanie’s junior high friends try to make her smoke cigarettes (“Fast Friends,” Season 7, Episode 5). According to recent reports of her stint in a rehab, it seems she dealt with some peer pressure later in life as well. Uncle Joey taught her nothing.

Anyway, I bought the orange and it tasted . . . just incredible. I lingered for a while watching people walk up and down the road and dripping juice all over myself. The fruit vendor stood up for a moment and took two steps away from his stand. I glimpsed a flash of gray out of the corner of my eye, and suddenly this thermonuclear simian-rocket came streaking out of the heavens.

It hit the ground traveling at thousands of miles per hour, zipped across the road, then launched off the lip of the embankment, an enormous bunch of stolen bananas clutched in its hideous, sub-human paw. The fruit man immediately threw himself off the embankment, pursuing the thief in a display of bravery not seen since Spartan warriors fought that weird, giant, hairless guy’s army in the movie 300. Which was super overrated, by the way.

The chase tumbled downhill for several hundred feet, until the monkey finally gave up, ditched the pilfered produce, and shot up a tree. The vendor picked up the bananas. Then he scrambled back up the hill, clinging to bushes and trees to keep from sliding backwards. He gained the road, replaced his products, and stood with his hands on his hips, panting heavily. He noticed me watching, gape-mouthed, from across the street, and turned towards me.

“The monkeys,” he said, still breathing heavily, “they have been troubling me all morning.”

YES! I couldn’t have been happier! You just don’t hear statements like that back home in Seattle. And he’d gone for the bananas! Every Curious George book I’d ever read told me that monkeys love bananas, and I’d just seen it proved before my very eyes. I went home happy, loving monkeys more than ever. But my pro-primate attitude would prove short lived.

The next morning I woke up and wandered out onto the balcony to take in the majesty of the Himalayan foothills. The ramshackle stucco houses of Dharamsala lay scattered across the slope below, punctuated by the yellowing leaves of enormous rhododendrons. The mists of early morning clung to the hills, breaking up and reconvening in ever disintegrating strands of gossamer as the gentle rays of a burgeoning sun sought to tear them asunder, ending their nightly reign. I smiled and stared out across the valley in wonder.

(Click here to buy a the latest issue of La Cuadra Magazine for your eBook reader, iPad, or other hand-held device.)

Then I went back into my room and there was this big-ass fucking monkey in there. It hunched over my backpack, reaching inside and pulling out huge handfuls of clothes and books and hurling everything around the room like so much of its own feces.

“HURPH?” said the monkey, and turned towards me. I backed quickly out of the room. The hirsute intruder followed me out, vaulted off the edge of the balcony, and disappeared across a nearby rooftop. Shit, I thought, maybe these hairy bastards ain’t so cool.

The final nail in my personal coffin of monkey loathing came close to a year later, in Sri Lanka. My good friend Uncle Money and I were traveling cross country, engaging in a series of wacky adventure/near death experiences. At one point we stopped to see some ancient temples in a place called Dambulla.

To gain the temple proper, one must climb a long series of low steps, rising slowly between huge domes of naked stone that jut above the arid and sparsely treed plains of central Sri Lanka. Along the path, which takes quite a while to navigate, little kids and old ladies sell nuts, cakes, trinkets and lotus blossoms to be placed in the temples as offerings.

There are also lots of monkeys. They sit around on the landings between staircases, grooming each other and waiting for pilgrims to toss them food. Many people feed them, as it’s seen as a nice and Buddhist-y thing to do. Unfortunately it’s made them all pricks. Even more so than usual.

Uncle Money and I finally made it up the stairs, where we were informed that we had to purchase tickets at the bottom. That obviously wasn’t going to happen, so we just looked at each other and silently agreed that this particular ancient Buddhist monument probably sucked and we didn’t need to see it.

As we started heading back down, I scored a dime bag of cashews off some kid, and was snacking on them as I strolled along, enjoying the view across the plains. Then I made a cardinal error: I tossed nuts at a monkey. And not just a monkey, but a group of monkeys. I did it because I’m stupid.

The monkeys at Dambulla are Toque macaques. According to Wikipedia, the males reach a maximum size of about two-feet tall and around 20 pounds, which is a bald-faced lie. It does note that males “can occasionally attain a much larger size than females,” but the entry does not specify how much larger. If those bastards only get up to two feet tall, then the big male that left the group and approached me must have actually been one monkey standing on another monkey’s shoulders, dressed up in a big monkey suit. Either that or some kindly Buddhist monk had been feeding him steroids and monkey-growth hormone. The same MGH that has tainted so many recent records in the great sport of monkey baseball.

I mean, this thing was huge. The biggest, damndest, dirtiest ape of them all. (I know it’s not actually an ape. Shut up.)

Anyway, this giant, shit-flinging threat to mankind’s dominance of the planet strolled right up to me. He stood on his hind legs, simultaneously mocking my bipedalism with an unflattering imitation, and scaring the crap out of me with his enormity. He reached up and grabbed my bag of nuts with one hideous appendage. With the other, he secured a firm grip on the hem of my shorts. Then he began pulling down with both arms.

I had a choice to make. I could release the nuts and hold on to my shorts, preserving my modesty but letting the monkey win, or I could hold onto the nuts, lose my pants, and end up fighting the beast over the cashews with my pants around my ankles.

He would no doubt win the battle, probably killing me in the process and gaining the confidence needed to organize a monkey revolt against the oppressive, nut-hoarding forces of mankind. In that case, not only would I lose my nuts and my life, but also doom the human race to thousands of years of tyranny as we toiled in the banana fields, struggling to gather fruits enough to appease our simian overlords lest we face execution by poo-flinging. I dropped the bag.

The monkey took the bag with casual nonchalance, as if I’d offered him my nuts. Like I’d said, “Hey! Monkey! I got you this nice bag of cashew nuts, which I do not plan to eat. If you ate them it would be just fine with me.” To clarify, I made no such declaration. The monkey stole my nuts.

Then he retreated to his monkey harem and sat on a rock. Just sat there, making direct eye contact with me and munching my cashews.

Kevin Petrie is the prodigal son of La Cuadra. If he ever returns to Antigua, we will slay the fatted keg. He is currently living in Singapore where he sells high-end booze, climbs rocks and lives a far more exciting life than most of the rest of us dumb fucks.

(Click here to buy a the latest issue of La Cuadra Magazine for your eBook reader, iPad, or other hand-held device.)