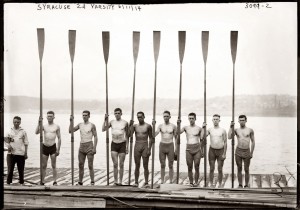 I graduated from Syracuse University in 1988. The following year a bunch of us made our way back to visit, and get very drunk with, friends who were still tangled in those ivied halls. I don’t recall much of the weekend which was sort of the plan. But I recall Sunday afternoon clearly.

There were seven of us – somehow led by a guy named Eric Wollschlager, who I didn’t know terribly well. Eric, close friends with a bunch of the other guys, had been kicked out of school a few years before for beating up a fraternity. Seems he was at a Fiji party and someone sucker punched one of his drinking buddies. Eric, for the record, was a Golden Gloves boxer and managed to break 4 noses on his way out the door with his friend under his protection. It further turns out that the Fiji boys had influential parents who were big donors to the school and in a kangaroo court of the disciplinary board, Eric was relieved of the burden to ever study at Syracuse University again.

But he’d come to town for the convivial in 1989, and was, on that Sunday afternoon, organizing us to rally against our hangovers and search out a bar that had The Girl From Ipanema on the juke box. That, as it turns out, was an unsuccessful quest, but it did bring us to joints we’d never visited in our many years on campus.

The last place we tried was called The Catch. Somewhere back in the early part of that century, The Catch had been a favored bar of the SU Crew team, and though the intervening years had changed the socioeconomic realities of the neighborhood for the dramatically poorer and darker, the oars still hung on the walls, and faded photographs of the winners of the 1954 Regatta on Onondaga were still in their frames.

I’d imagine we were the first white boys from the university to cross their threshold in decades.

When we got there, around 2 in the afternoon, the place was empty except for the bartender and the bar-back cleaning up from the night before. On the far end of the dance floor a few guys milled about setting up a drum kit and hooking up some amps. We ordered beers. And, no, the bartender informed Eric, they didn’t have The Girl From Ipanema on the juke. But there was something about the cave like atmosphere of the bar that told us this was the place to spend the next few hours of our lives shooting the shit and retelling stories to one another that we all knew as if we’d been there ourselves, and recently. Which, of course, we had been.

Then, after about half an hour, the place started to fill up with very well dressed Black folk from the neighborhood. From the suits and the bonnets, it was pretty clear that mass at the local Baptist Ministry had just let out, and now, with souls both roused and cleansed, they were ready to party.

At three o’clock the band hit their first tune and the bar exploded into life. This may be going too far for some of more sensitive readers, but in that instant the place looked like a live action, full motion painting. Specifically the one used at the beginning of every episode of Good Times for four years, Sugar Shack by Ernie Barnes. The men who’d been gathering at the bar walked over to the ladies who sat, fanning themselves, against the wall on a row of benches and couples just started to move. Half a dozen beats later, but for a few wall flowers and us White boys, the whole place was dancing.

For a fresh-faced 21 year old who had never traveled beyond a weekend in Canada, it felt like I supposed it might have if we were in a distant land, watching, as observers, a culture that wasn’t one any of us knew. The dancing I’d known up on the hill seemed to have something of a studied indifference to it – as if you would have violated a code had you smiled or looked directly into the eyes of your partner. Dancing on campus, for everyone but the Dead Heads, didn’t look like it was supposed to be fun – and the Dead Heads looked like victims of some odd, aurally induced palsy. Dancing at The Generic Bar or at a Red House Party was meant to express how little you cared about life, and how cool that made you. Christ, I wouldn’t be 21 again for the world. What an idiot time. But in The Catch, on the dance floor, there was pure, laughing, sweating, just-came-from-church-and-hope-to-soon-be-fucking joy apparent on every face.

But, also, there was no sense of exclusivity from the patrons of The Catch. There were no back turned, thumb gesturing conversations about us. We were, as far as we could tell, being treated as welcomed, if unexpected, guests.

The band was amazing. They were a straight rhythm and blues set, with a soulful baritone singer leading the way over grinding guitar riffs and a heavy back beat. They played maybe three songs, and Eric, as he was like to do, jumped into the fray. He finished his beer, looked at my buddy Tony and me, and said, “I’m gonna go ask that chick to dance.”

Tony and I tried to warn him off the action. It could, we figured, upset the generally positive vibe of the afternoon. Hey, it’s one thing for the White boys to be there, but trying to reverse the Animal House “Do You Mind If We Dance Wif Yo’ Dates” scene could land us all in a world of shit. At least that’s what Tony and I thought.

We were wrong about that, of course.