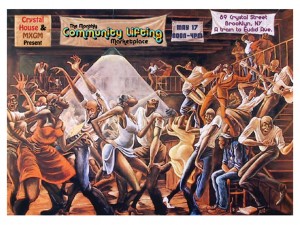 Eric went over to the row of women sitting against the wall and asked a heavy-set, middle aged woman for her hand. With a smile and a heave, she lifted herself off the chair and they walked to the dance floor. When they got there, they just flew. Hips, arms, interlocked twirls, flirting and laughter. It was goddamned magic.

Maybe it was the beer, maybe it was the sly joy of seeing the smiles on Eric and his partner’s faces. Maybe it was the music. Maybe it was just the moment, but I found myself following his  lead. I set down my beer, and walked over to a woman, one of the few left without a partner, and asked her to dance. She must have gone 300 pounds if she was an ounce and I was about a buck eighty five at the time, but my God that woman could move. And she could take me with her while doing so. At the end of the first song, we hugged, breathing a little hard. I asked her name. She growled, “Bertha.”

Bertha and I hustled it around the floor for several dances over the next hour or two. In between turns on the floor, she introduced me to some of her friends. I introduced them to some of mine. Dance partners changed and reformed. Many, many pitchers of beer were bought, spilled or consumed. It was, hands down, one of the best days I’d ever spent in all of my life. But I was a rational boy. I had to get back to work on Monday morning. As did Tony. So, at about 6 in the evening, just as the party was really ramping up, we decided to leave.

Tony had promised Eric a ride down to New York City after he had dropped me off in my hometown of Binghamton, about 90 miles down Route 81. Eric’s life hadn’t been easy since getting the boot from SU. He’s moved from school to unemployment to school to more unemployment. But he’d recently landed a good job in Baltimore – a real coup for him, given his recent years. He was excited about it, and he was starting on Monday morning at 8AM. His plan had been to get his ass to NYC, then to take a night train to Baltimore, have a quick nap and a shower at his folks’ place and show up for the first day of the rest of his life.

Tony tapped him on the shoulder and called him from the dance floor. He apologized to his partner and came with us. We were expecting, from how much fun he was having, to get a, “Come on, guys… one more beer.” What we weren’t expecting was his flat refusal to even consider leaving. Nor were we expecting the eloquence of his explanation why.

He looked at us, maybe with a bit of pity in his eye, and said, “Guys, God just dropped a gem on our path. There ain’t a chance in hell I’m gonna disrespect it,” and he turned on his heel, whistled for his partner and, again, took up the twirl.

It was so final that neither Tony nor I even tried to talk him out of it. His answer was so true, that we were, essentially, staggered by it. As our other friends had already drifted on down the road to their own hometowns, we shrugged our shoulders, paid our bill and walked, silently out the door. The last image I had of Eric was him trying a daring dip with Bertha. The smile on his face was glowing. The joy of the music was flowing.

And to push the asinine rhyme a step too far, as we walked into the evening light, our shame was showing.

Tony and I didn’t say a word to one another for over an hour. We both knew we had to go to work the next day. We both knew there’d be hell to pay if we screwed up. We both had, “responsibilities.”

In actuality, what we had were entry level bullshit jobs at bullshit businesses where we’d spend, maybe, another few months with before moving on. In actuality, had we called in sick that one Monday 20 years ago the world would have kept on turning. In our hearts, we knew that, too. But fearing grief from our parents and our bosses, we tucked tail and headed south, leaving Bertha and Eric and the gem of God back there in our past.

When I finally worked up the nerve to turn to Tony from the passenger’s seat, I started to say, “Hey, do you think we could…” Tony cut me off at the pass and said, “Nope. We fucked up. It’s done.”

That night, laying in bed, I made a promise to myself, broken a few times since then – but honored far more, that I’d never disrespect one of God’s gems, again. Since that Sunday afternoon, I’ve never heard word from, nor seen, Eric Wollschlager. For all I know he might still be there, at The Catch, dancing and laughing. But in my mind’s eye, he’s always been somewhere just a few miles up ahead of me on the path, and if I ever catch up to him, I’m going to thank him for the lesson he taught me over beers and blues and Bertha on Sunday afternoon in 1989.

One Year Ago I Had An Illusion. One Year Ago, This Very Day
By Kara Andrade
Tuesday, August 10th, 2010