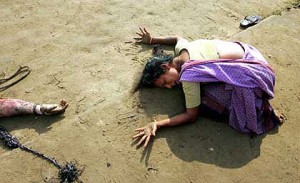 I look at Logan but he is at a loss to explain the events as usual.  “It is ze full moon, ze tides are strong,” some French woman is saying.  Silly bitch.  But I can’t muster a better explanation.

We go to the little travel kiosk in the Ashram to check the train schedules then sit around a while softly talking shit about whomever happens by.  Eventually we go up to our room on the 15th floor of the big pink cereal-box dormitory to read for a bit.  I am sitting on my sleeping pad flipping through a pamphlet of Ashram propaganda when I hear splashing and yelling out of the corner of my ear.  A consternation is wafting up from the palm forests below, terrified screams riding up the 15 stories on the crest of a dull white roar.  What the hell is that?  I walk over to the window and look out.

The sea is coming….

Amritapuri Ashram is located on a narrow peninsula of sandy land in southern Kerala, a state in the southwest of India.  It consists of three immense dormitory structures, a hospital building, and a central temple.  Everything is painted bubblegum pink.  The 15-story dorms, built on land reclaimed from the swamps by filling in the saturated parts with sand, are said to be the tallest structures in the state.  They are bordered on the west by the Indian Ocean and on the east by one of an immense network of backwater canals.  It is a slow moving frog-colored estuary lined with huge cantilevered, Chinese fishing nets.  The surrounding land is billiard table flat palm tree forest all the way to the horizon.

Amma, the hugging saint, one of two living deities in India, has her headquarters here.  Over the course of the last three decades she has created myriad social programs to aid India’s poor, provide education, construct housing, and improve medical care for hundreds of thousands of Indians.  She has also given over 25 million hugs.  People queue for hours in the sweaty confines of the crowded temple to receive Darshan: a quick embrace from a living god.  I spend the majority of my time just outside the Ashram at the chai shop, smoking and discussing the implications of Amma’s deification with the other cynics or listening to the western hippie imports talk about ‘Amma’s energy’.

It is a strange place.  Amma’s message is supposed to be something like ‘love your fellow human beings’ but the intricacies of her teachings are sometimes lost beneath the flood of her followers.  Every Amma-zealot I meet has a different idea of who or what she is, and what is important about her.  Because she subscribes to no specific dogma, she can be all things to all people, and she is.

Most of her followers are extremely kind people, but many are a bit more anal than one might expect.  Ashram rules are followed with almost fascistic control and efficiency; from an 11 o’clock curfew, to set meal times, to an Ashram wide smoking ban.  The place runs like clockwork.  The rabid enforcement of rules seems somehow contrary to the principles upon which the Ashram was founded, and I am never able to reconcile these two seemingly antithetical elements in my mind.  It annoys me.  Especially when people tell me not to talk on the stairs simply because there is no talking on the stairs.  Which is why I spend so much time at the tea stall, or on the balcony outside my room where I now stand, looking down and wondering why the sea is coming…

The entire narrow peninsula between the ocean and the lethargic green slick of the backwater is disappearing beneath a rushing chocolate river. It looks as if the land has suddenly and inexplicably become lower than the water, and the entire ocean is simply flowing downhill, engulfing the Iowa-flat expanse of palm tree forest.  I hear women screaming and see white clad pilgrims wading chest deep through the sludge clogged Ashram courtyard.  The smell of backed up sewage gurgles through the kitchens and bedrooms of the buildings ground floors.  I see one of the women from the chai shop, up to her neck in water, fighting the current that is funneling between the Ashram’s concrete walls to ferry her meager possessions to some non-existent dry patch.

There are boats attempting to cross the now oil-black moat of unforgiving back water.  They miss the docks and are swept down stream.  People clog the communal balconies of D building, leaning over watching the carnage, the palm trees like the legs of wading birds, the elephants tied by one foot in their enclosure trumpeting and struggling as they are battered by debris borne on by the relentless flow.

By the time Logan and I reach the ground floor, the Ashram’s steps are a jumble of Indian and Western refugees.  They stand about, slack jawed and stranded on the partially exposed concrete blocks, helplessly watching as Indian men who can’t swim struggle to string a line across the new-born river and begin helping the weak, the injured, the elderly and the fearful across the current toward the main dorms and the ferry docks.  I mount the steps and tread on a fish.  What do we do?  What can any of us do?  Everyone is talking.  “I heard it was an earthquake in Indonesia this morning.”  “8.5”  “I heard 9.0.”  Jesus.  Logan disappears.

I make my way to the Kitchen, struggling barefoot over invisible ground against swirling currents.  All the food must be moved up stairs.  Bags of rice that when dry weigh 50 kilos, now saturated and polluted, weigh considerably more. Two men heave one onto my shoulder and I make the trip across the concrete floor – now littered with lentils and smeared with uncooked rice – then up a flight of stairs to dump it, and run back down to get in line for another.  My body hurts, I gasp for breath, choking on the thick shit-smelling air that comes wafting up out of the receding brine.  Filthy people pant and sweat around me, exchange purse-lipped half-grimaced smiles as they pass one another.  I find Logan and we spend a while moving wet linens out of the laundry rooms and up four flights to an unused bedroom.  My body is screaming for rest.  People keep screaming for help.